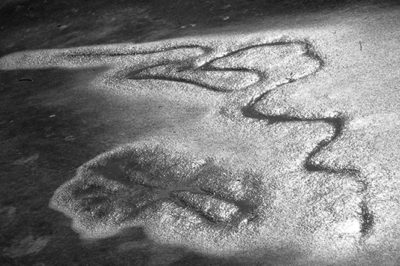 Until receiving a phone call from Nina Angelo (OAM), I knew nothing of neither the struggles involved in protecting the land around Kariong (near Gosford) nor that part of this land was now on the market. When on-site I had seen a lot of tagged trees, and a for sale sign somewhere along a main road, but being unfamiliar with the whole region, nothing registered.

The land for sale contains the Gosford Glyphs, located near Kariong, about 60 km north of Sydney. This site features little known carved ‘ancient Egyptian’ hieroglyphs that were brought to light by various researchers in past decades.

We are convinced that close to this site, and never before seen by non-Aboriginals until discovered very recently, is a rock platform covered with a set of sacred engravings of considerable significance. On this large platform we saw a fish, serpent, massive dolphin or whale, circles and a variety of shapes and symbols.

Without doubt, it is an impressive gallery of ancient Aboriginal rock art deserving of protection. There is one life-sized engraving of Durramullan (son of Creation Spirit Biamie) that is so unique, utterly unexpected, and obviously sacred, decisions had to be made as to how it can be publicly described.

There is nothing remotely like it anywhere in Australia. And that’s it. That is all we have agreed to reveal. The photographs taken late in the afternoon on this site, and in particular those of Durramullan, should never be reproduced or published through any form of the media but…

Owing to the real possibility this land, irrespective of the credentials for or against the Gosford Glyphs, could be sold then developed, a different approach is compulsory. It has been our agreed stance to categorise all the sites/relics we are sharing as being ‘found within 2 hours of Sydney’, but that generalised approach doesn’t apply in this location. Those engravings, and other related platforms (one is actually located within this block) are now directly under threat.

The distance between this unique site and that of the Gosford Glyphs is far too close for coincidence or comfort. As to determining the bona fides of this supposed Egyptian site, we have one advantage. According to Dr. Hans-Dieter von Senff, who has produced a draft paper on the site:

These Hieroglyphs are real and have existed for some 4,500 years in Australia. In order to prove that these Proto-Egyptian glyphs are not graffiti, as claimed by various “Experts” and “Egyptologists,” but are the written record left by pre-historic man, written in a coherent and understandable language that makes sense even 4,500 years later. This site is no hoax, but a genuine archaeological discovery; as is proven by the newly discovered second set of glyphs.

The critics who dispute the origin of these engravings numbering over 300 are not sensitive to the bigger picture, and if proven to be engraved by Egyptians, these glyphs form a pivotal and historic epitaph to an Australian history very few suspect. The engravings were first properly translated by Ray Johnson, claimed to be proto-Egyptian and accepted “as correct by the General Director of Cairo Museum, Dr. Dia’ Abou-Ghazi.”1 However, despite the endorsement of the resident expert in Cairo, Australian academics with less impressive credentials are adamant this is an elaborate hoax.

The site includes an engraved Ankh (see image above courtesy of Steve Strong), an essential accompaniment to Thoth, placed alongside an Ibis footprint (Thoth’s recent animal counterpart) and what we believe to be the ‘River of Life’. Two Ibis-men engraved into rock, both in profile with the head of an ibis and body of a human, seem to resonate to the same ancient Egyptian theme. What really surprised us was that not only are the ibis and Thoth synonymous, but originally Thoth was depicted in ape-form. And it is this more ancient representation that is found twice in Australia, extending the horizons considerably. A statue found at Gympie, said to act as one of five sentries guarding the controversial seven-stepped pyramid at Gympie, is a depiction of Thoth in his more primal ape-like form and has been argued over and often ridiculed.

The recent discovery of an engraving of Durramullan, again in profile, is less open to debate. The pronounced long forehead and protruding lips is reminiscent of a baboon or one of the larger apes, and so out of context when carved into a continent lacking ape or monkey. The engraving is ancient, carved by an artist aware of an African animal and Egyptian deity supposedly unknown until the British invasion. In what only adds to the quality and quantity of this cross-cultural partnership, there are two sets of Aboriginal engravings, one containing 31 separate and distinct human characters and the other five figures, of which three have human bodies and what appears to be crocodile heads.

It is for these reasons, and many others, we are in complete agreement with Robert Lawlor, author of the highly regarded Voices of the First Day, when noting the same origin and sequence. “The Egyptian religious practices, zoomorphic pantheon of gods, concepts of death and rebirth, sorcery, magic and medicine all have their origins in the primal culture of the First Day.”2

We see the presence of Egyptians in Australia beginning at around 5,000 years ago, entirely in keeping with a global history that saw, for a variety of reasons too complex to discuss now, the Australian Aboriginal mariners and explorers finally return to Australia at around the same time. We believe the glyphs and other Egyptian remains found ‘within two hours of Sydney’ bear testimony to a spiritual sabbatical to the place where Egyptian religion and culture began.

That the Gosford Glyphs are so close to the sacred Durramullan site suggests an agreement between the first Australians and people from a distant continent. The Durramullan platform is undeniably special, and the Glyphs are an integral part of this arrangement, unique not only in Australia but the world. The Egyptian crypt and engravings, dedicated to the memory of the son of a Pharaoh, was constructed close to the Durramullan rock platform and could only be created with the consent of the local Aboriginals.

Of course, if Australian Aboriginals did sail the globe in ancient times this journey is dependent upon ocean-going boats being constructed in Australia. Up at the Top End there are many engravings and paintings of boats which are mistakenly claimed to be inspired by Maccassan boats fishing for trepan. No such claims can be made for the engraving of an ocean-going boat found in the northern section of the Gosford site. The boat’s design, with a steep prow and stern, has one primary function: to sail through large waves. It would be a waste of time, effort and resources to construct a boat according to the shape and proportions engraved into the rock, if the vessel sailed in stiller waters. More importantly, this engraving goes a long way towards establishing the claims made by Ramindjeri Elders. If indeed, as they insist, their ancestors circumnavigated the globe in a figure eight then this sophisticated design would serve that purpose.

That engraving and the Ramindjeri account provide answers to a series of unresolved questions that mainstream academia are unable to appreciate. The presence of Australian Aboriginal people in America was the focus of Issue 35 of the highly respected science magazine Cosmos. The front cover carried the following caption: “Did Aborigines discover America? Startling new finds suggest Australia’s first people made it all the way to South America more than 11,000 years ago.”3

Of course, America was merely one port-of-call when the First Australians set sail. “Dr. Raghavendra and researchers from the Indian-government backed Anthropological Survey of India project found unique genetic mutations were shared between modern-day Indians and Aborigines.”4 They “identified seven people from central Dravidian and Austro-Asiatic tribes who shared genetic traits only found in Aborigines.”5 These facts, along with newly discovered Australian genetic links to a hominid in Siberia referred to as Denosovan, necessitate the same means of transport: a boat.

However, the plan of a boat is insufficient. Also required are both the tools needed to construct such a vessel and navigational skills before sailing to India, America, Asia, Egypt or any other destination. An axe is an essential prerequisite if building a vessel capable of sailing across oceans. In keeping with all other firsts, it should come as no surprise that the oldest axes yet found are located within Sahul (the greater Australian continent which includes PNG, Tasmania, etc). The oldest axe was found at Huon Terrace (PNG) and is dated at 40,000 years, followed by an axe found in Jawoyn land (N.T.) claimed to be 35,500 years old. Remaining within Australia, an axe was discovered at Sandy Creek (QLD 32,000 years) and another at Malangangerr (N.T. 23,000 years). In what confirms the antiquity of Australian axe technology, and by association boats, Angel John Gallard has in his possession a hand-held chopper (the precursor to the axe) which he believes to be no less than 60,000 years old, with the real possibility it is over 100,000 years old. The oldest axe discovered outside Australia was found at Niah Cave (Sarawak) and is thought to be 15,500 years old.

For such an epic journey to succeed, especially if circumnavigating the world in a figure eight, Aboriginal mariners must have navigated by the stars. Once again it all begins here. As announced by a team of scientists from the CSIRO, the oldest astronomical construction was found at Wurdi Youang (Victoria). “The strange stone arrangement”6 has “two points set in perfect alignment with the setting sun on a midsummer’s day.”7 CSIRO experts are of the opinion the “ancient Aboriginal sundial could be upwards of 10,000 years old.”8 Nor do these rocks stand in isolation – there are two sets of walls recently found in the Snowy Mountains, the first is aligned east-west, marking out the conjunction of planets and contains no less than 10,000 rocks. The second is at least four times bigger and runs down an extremely steep slope.

Within ‘two hours from Sydney’ is a perfectly aligned five-rocked compass and another construction that is far more enigmatic, which for obvious reasons, we call ‘mini-Stonehenge’. It is made up of 46 stones in the inner circle and 18 rocks forming what we feel are clusters of stars. The four directions are marked out by arches with a horizontal stone supported by stone pillars. All four constructions, although separated by hundreds of kilometres, serve the same purpose: charting the heavens.

There is one pattern exhibited by these sites that seems to openly contradict an artistic maxim we assumed held fast throughout Australia. It was our belief that traditional Aboriginal art was region specific. Within this area we have found over 25 styles/techniques, many of which are claimed to be created in one tribal estate. We found evidence of the following Aboriginal artistic styles: Panaramitee; X-Ray; Figurative; Mimi; Lightning Brothers; Wandjina; Papunya; Hand stencils (two types); Representational; Rock engraving; Rock Pecking; Stone Arrangements; Bands across the body; Egyptian symbols; Bird prints; Engraved shield design (found throughout Australia); Profiled spirits; and others we could not identify.

Where does that leave us? Relying on textbooks and academics ‘dazed and confused’… Or there is an alternative route. We are convinced the First Australians are completely separate to the Africans and were the first homo sapien sapiens. It was from Australia, not Africa, the first migration originated, and it is from Australia that religion, gender equality, astronomy, burials, sailing, music, art, democracy and all the nobler pursuits began. And it is in Australia, in particular the area ‘within 2 hours from Sydney’, that proof of this global legacy can still be found.

Steve Strong has contributed an article on the ancient Egyptian connection to Australia in New Dawn Special Issue 19.


This article was published in New Dawn 130.
If you appreciate this article, please consider a contribution to help maintain this website.