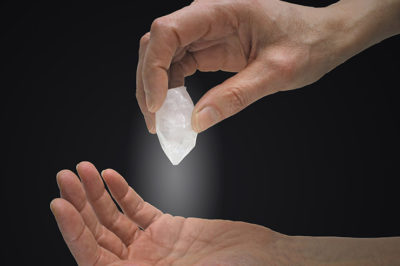 A recent issue of New Dawn delved into the secretive world of the Aboriginal shaman or “clever man” as he was known to his people. Briefly mentioned by Bruce Stringer in his article ‘Cleverman’ (in New Dawn 159) was the use of quartz crystals in the life and work of these powerful figures. Quartz crystals played a role in shamanic initiation ceremonies and in healing.

In his book Aboriginal Men of High Degree, Australian anthropologist A.P. Elkin describes meeting Aboriginal people “of high degree” who are the equivalent of what we know in other traditions as “medicine men” or “shamans.” He reports that crystals played a prominent role in the beliefs of these “clevermen.” Elkin says they would carry quartz crystals on their person, and the Wiradjeri shamans spoke of quartz as being solidified “sacred powerful water” which was to be sprinkled on initiates. The process was symbolically described: “The water spread all over the postulant and was completely absorbed. Then feathers emerged from the latter’s arms, which grew into wings in the course of two days.”

Ronald Rose in his 1957 book Living Magic relates the dramatic initiation of two young Aboriginal boys. At a moment of great emotion, a vision of an old man showed them “a large, bright crystal that stole light from the dawn and dazzled their eyes.” Soon the boys felt strange things moving on their bodies, “things that felt like snakes and spiders… He thought he felt the sharp stab of fangs in his leg and it went numb.” One of the boys trembled, perspired and tensed up; he failed the test and was led away. The other one sank into “a state of repose that was almost sleep.” In this trance-like state, the boy saw strange and wonderful things. The clevermen conducting the initiation seemed to walk into eucalyptus trees; they melted into the trees and a moment later appeared on the other side. Then the clevermen “…produced from within themselves great numbers of gleaming quartz crystals… Each old doctor (cleverman) formed a small pile of crystals beside him. These, too, were part of his power, symbols of the sacred water that each had acquired during his making as a clever-man. With these the doctor could perform miracles: the crystals warned him of the approach of enemies, he was assisted by them in making his cures, he could project one or more into an enemy and thus kill him.”

The same Aboriginal tribe, the Wiradjeri, believed that a supernatural being known as Baiame sung “a piece of quartz crystal into their forehead so that they will have X-ray vision.” Along with this power also come an ability to “fly.”

Aboriginal clevermen, as well as shamans and seers in different parts of the world, valued quartz and other crystals as power objects to spiritually connect them with the other ’worlds’.

Through the eyes of modern science, we now understand a lot more about crystals and how they could be useful in the context of a different approach to reality such as that lived by our ancient ancestors. The work of researchers such as Nicholas Pearson, author of The Seven Archetypal Stones, helps explain how a subtle energy field is generated by a crystal’s lattice. Each different type of crystal produces its own orderly energy field, which is broadcast into the immediate environment. What we don’t know is the exact nature of the crystal connection to other dimensions and ’worlds’ nor how to truly harness the full power as revealed in the stories recorded and written down from the time when human communities lived inside different reality frameworks.