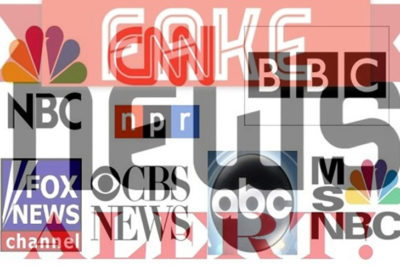 Make no mistake about it: for decades, the government-media complex has been waging information warfare against the public and on behalf of powerful transnational corporate interests.

The latest fake news crisis is just another campaign in the information war. By throwing a variety of websites into one big basket and labelling everything with the derogatory term ‘fake news’, the political class and mainstream media are attempting to discredit alternative sources of information to regain some of the audience traffic they have lost over the last 15 years. They want to turn back the clock to a time when the establishment enjoyed a complete monopoly over news and information, and if there’s one thing that history proves time and time again – absolute power corrupts absolutely.

In the winter of 1898, a terrible incident befell America when one of its flagship naval vessels, the USS Maine, sunk following an unexplained explosion in Havana harbour, Cuba. Afterwards some leading US newspapers took advantage of the confusion and emotive nature of the story. William Randolph Hearst’s New York Journal and its racy sister publication, the Evening Journal, as well as Joseph Pulitzer’s New York World, blamed the incident on Spanish saboteurs. Shortly afterwards, the US entered the Spanish-American War in order to capture Cuba, Puerto Rico, Guam and the Philippines.

The practice of over-reporting and embellishing a story to stir public outrage became known as yellow journalism – a badge proudly worn by Hearst at the time. Hearst was ahead of his time in believing media outlets should insert themselves into events in order to affect political outcomes on behalf of the government. One year earlier, in 1897, Hearst’s New York World opined the doctrine of “journalism of action” which meant a newspaper should inject itself into public life in order to “fitly render any public service within its power.”1 Are things really much different today?

On 4 August 1964, a joint US Navy patrol ran into bad weather off the coast of Vietnam, causing problems with US radar and sonar. This happened at a time of heightened tensions in the region with US national security on red alert. Amid the confusion, some US agent or official – either in the CIA, the NSA or the Pentagon national security structure – circulated a false report that US Navy vessels and planes were under attack from North Vietnamese patrol attack boats in international waters in the Gulf of Tonkin. The next day, US President Lyndon B. Johnson appeared on national television to announce his intent to retaliate against North Vietnamese targets, stating: “Repeated acts of violence against the armed forces of the United States must be met not only with alert defense, but with positive reply. The reply is being given as I speak to you tonight.”2 The infamous event came to be known as the ‘Gulf of Tonkin Incident’. Despite the fact of obvious discrepancies in the government’s account of events, the mainstream media accepted the government’s fake story without question. With the media providing public relations backing, Washington took the next step and declared war on Vietnam, albeit on false pretences. This was the beginning a 10 year-long bloody conflict which saw 55,000 US servicemen killed, 250,000 injured and maimed, along with over 1 million Vietnamese killed.

In March 2003, on the eve of the Iraq War, US and UK government officials managed to convince their respective mainstream media cadres that Iraq’s Saddam Hussein was concealing massive stockpiles of chemical weapons which came to be known as “Weapons of Mass Destruction.” Despite repeated assurances by UN weapons inspectors and on-the-ground US weapons experts that these WMDs were nowhere to be found, both US President George W. Bush and UK Prime Minister Tony Blair had made up their minds Saddam was hiding vast stores of deadly munitions, and therefore a US-led invasion was a fait accompli. With no proof or actual evidence, the press went along with it all because they were “very confident” about the “intelligence.” The White House dispatched Secretary of State Colin Powell to the United Nations where he regurgitated a made-up story about Saddam Hussein’s deadly mobile anthrax labs, aka “The Winnebagos of Death.”3 Yes, it sounded completely crazy to millions of intelligent, normal people at the time, and yet it was good enough for the mainstream media circa 2002-2003. Aside from CNN, ABC, and NBC’s complete allegiance to the government’s fraudulent war effort, America’s alleged ‘papers of record’, The New York Times and The Washington Post, helped by republishing government-issued fictional accounts. One ‘journalist’ in particular, Judith Miller from The New York Times, managed to dupe the public by citing ‘sources’ like disgraced Iraqi dissident Ahmed Chalabi, who fed the US intelligence community false information about Iraq’s supposed stockpiles of WMDs. The Times later admitted that many of Miller’s stories were false. Still, the damage was already done. The result of this government-media campaign of actual fake news was 1 million dead Iraqis, thousands of dead US servicemen, tens of thousands wounded and maimed, along with trillions of US taxpayer funds spent – an open bill which continues to this day.

In 2011, after working behind the scenes helping to organise, arm and equip militant Jihadi fighters and rebel operatives in Libya, the Obama Administration led by then Secretary of State Hillary Clinton desperately needed an excuse to ground the Libyan Air Force in order that NATO-backed Jihadi fighters on the ground could successfully overthrow the government of Colonel Muammar Qadhafi. The most direct route to achieve air superiority would be to implement a No Fly Zone over Libya. But with the public relations scars still fresh from the Iraq debacle, Barack Obama and France’s Nicolas Sarkozy knew that a No Fly Zone needed broad international support and therefore had to be authorised by the United Nations. In order to get the global public behind the campaign, a series of fake news stories were concocted by the US State Department and the mainstream media. The first one was the popular talking point that Qadhafi was using military fighter jets to “gun down peaceful protesters in the streets.” Despite no proof or evidence this actually happened, the media ran with it anyway. It became the keystone of the No Fly Zone campaign. Another outlandish tale had Qadhafi issuing Viagra to his troops so they could go out and commit “mass rape” against the women of Libya. This invented story was originally disseminated by Qatari government media outlet Al Jazeera,4 and specifically designed to help generate liberal/Left sympathy for a ‘humanitarian intervention’ by NATO. The key emissary to deliver this fake news to the public and give it credibility was none other than Obama’s former US ambassador to the UN, Susan Rice.5 As a result of these and other unfounded ‘human rights’ abuses trumpeted by the mainstream media, on 17 March 2011 UN Resolution 1973 was passed by the UN Security Council and the No Fly Zone was immediately transformed into a US-led mass-bombing campaign of Libya by NATO. It is estimated that 30,000 Libyans were killed through ‘rebel’ ground fighting, artillery and relentless NATO bombing which toppled the Libyan government, turning the country into a permanent failed state and terrorist haven. Looking back, it’s hard to believe so few questioned the made-up stories, but like Iraq and so many other wars, the media played their role in propelling the fake news.

In the heat of the 2016 US presidential election, a near repeat of the Iraq WMD scam unfolded, only this time the Obama Administration and the same ‘intelligence community’ generated an official conspiracy theory that Russia had somehow hacked into the US election systems, the Democratic National Committee (DNC), and Clinton campaign manager John Podesta’s emails. Backed by the Obama White House, Democratic candidate Hillary Clinton and the mainstream media pressed ahead on blaming Russia – not just for DNC leaks but also for hacking into US election systems in Arizona – despite the fact there was no evidence other than innuendo and pure speculation. The media’s coverage on this issue was deceptive from the onset. In a leading news release entitled “Russian hackers targeted Arizona election system,”6 we can see how after the cock-sure headline the first paragraph would sound definitive: “Hackers targeted voter registration systems in Illinois and Arizona, and the FBI alerted Arizona officials in June that Russians were behind the assault on the election system in that state.” Later in the article you can see the media walking back the charge to cover themselves for future inquiry: “It turned out that the hackers had not compromised the state system or even any county system. They had, however, stolen the username and password of a single election official in Gila County.” Here we see how the media and the ruling party use emotive headlines to sell an idea, even though there is nothing in the story at all. The ‘Russian Hack’ story was then expanded by the White House and the Democratic Party to claim that Russia actually intervened in the presidential election on behalf of Donald Trump, thus helping him defeat the odds-on favourite Hillary Clinton. To date, no actual evidence has been produced by the US government to back-up this incredible conspiracy theory. Interestingly, just as in 2003 with Iraq, the establishment enlisted the help of some of the same media operatives to advance the mainstream’s fake news story. This story has unnecessarily set back US-Russian relations to the Cold War era. In December 2016, a month after the election, Judith Miller (now with FOX News) suddenly appeared on the scene to give support to the White House and CIA’s shaky ‘Russian Hack’ narrative. “As Sen. McCain said, it’s pretty clear that the Russians did something,” said Miller. “And it’s pretty clear – according to 17 US intelligence agencies – what they did helped Donald Trump.”7 Another case of mainstream media déjà vu.

These are a few examples demonstrating what can, and will go wrong when the press blindly accepts the government narrative as gospel, allowing the mainstream media to push out and validate government-approved fake news to an unsuspecting public.