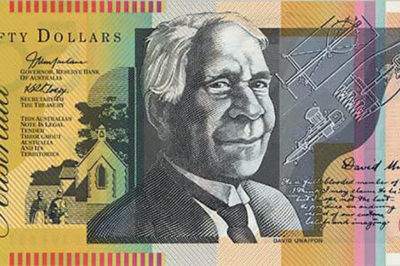 David Unaipon's unassuming smile greets us on one side of the Australian $50 note.

In modern times, the term ‘genius’ has been thrown about far too often for it to be meaningful. From celebrities to politicians, the standard of the genius has dropped so low that we can no longer take the word seriously.

However, if indeed there was true genius to speak of, the name David Unaipon would certainly fit the bill in a number of ways. His name might not immediately be recognised by every Australian – which is a sad indictment of our cultural heritage – but his face is a face we encounter on a daily basis when shopping or paying one of the many bills that account for expenditure in this once-lucky country. His unassuming smile greets us on one side of the Australian $50 note. History tells us that he was a prolific writer, deep philosopher and scholar, accomplished linguist, cross-denominational preacher and inventor of the highest degree – an Australian genius if ever there was one!

What made David Unaipon all the more special was the fact that he was an activist, bringing to light the plight of Australian Aboriginals of his day at a time when the Aborigines were relegated to the classification of Flora and Fauna by the Australian Government, considered a dying race. He was articulate, knowledgeable, well-read, able to apply complex scientific concepts to diagrams of his inventions, and envisioned a brighter future for all people despite the prejudices he faced. His selfless pursuits were for the betterment of all Australians but, unfortunately, he became victim to the scourge of white government plagiarism, publishing royalty scams and the baggage of well-meaning do-gooders…

And, yet, he managed to shine as a high achiever and truly great man despite all obstacles.

During his early schooling at Point McLeay Mission in South Australia’s Coorong region, a 7-year old David impressed one senior who stated that, “I only wish the majority of white boys were as bright, intelligent, well-instructed and well-mannered, as the little fellow I am now taking charge of.” (G. Jenkin, Conquest of the Ngarrindjeri, Rigby 1979, 185). This “little fellow” gravitated towards the sciences but also had a passion for philosophy and music. His father, James Ngunaitponi, was an evangelist and his insights into Christianity obviously had a moral and ethical bearing on his son, a future Holy Man.

Unaipon invented a number of items and designed many more. His provisional patent 15,624 for an “Improved mechanical motion device” was the basis of modern mechanical sheep shears – a tool that propped up Australia’s multi-million dollar wool industry for decades and an achievement for which he never received any formal creative credit or financial reward. (An image from the design of these shears is included in the artwork of the $50 note). Pre-dating World War One, Unaipon utilised the aerodynamic characteristics inherent in an ancient Aboriginal weapon – the boomerang – thus creating drawings of what would later be recognised as the helicopter. He also explored the effects and applications for the polarisation of light and broke new ground in other fields of scientific research. His importance as an inventor inspired those in the know to celebrate his genius with terms such as “Australia’s Leonardo da Vinci.” What other description could come close?

He spent much of his adult life researching solutions to the problems of creating a perpetual-motion device – something that eluded him and continues to elude the greatest scientific minds of our time. It could be argued he would have made further steps towards his goal if only he had the proper financial support. However, if he was successfully able to transmute his ideas into a feasible working model, the employment of his device would inevitably have been adopted for military purposes, directly conflicting with his high morals and religious beliefs. One can only wonder what other incredible achievements David Unaipon might have conceived if he was afforded the opportunities of the white ruling class.

As a side note, the use of David’s image on the Australian $50 note is surrounded in controversy: institutional copyright infringement has resulted in the legal challenge of the Reserve Bank of Australia’s utilisation of his image without his family’s permission.

This article was published in New Dawn 160.
If you appreciate this article, please consider a contribution to help maintain this website.