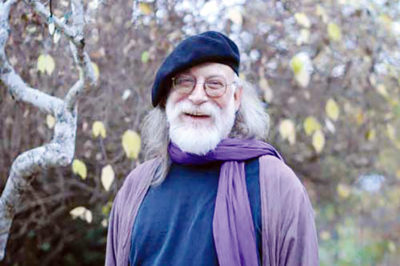 JACK FOX-WILLIAMS (JFW): Could you explain how you became interested in plant intelligence? Was there a particular event or piece of information that sparked your interest?

STEPHEN HARROD BUHNER (SHB): I was born in 1952. There were only around 2.5 billion people on the planet then (compared to nearly 8 billion now).There was still a lot of wild land, places people didn’t go and I spent a lot of time in them. During those times I felt a real sense of communication from wild landscapes, a kind of touching that I think most people naturally feel (though they rarely talk about it except in the most general sense). In my 20s I moved to the high country of Colorado and began spending more and more time in wild forest ecosystems. And I began to have unusual experiences the more I allowed myself to drop down into those landscapes, become less mental but more experiential, my senses more alive. Every so often I would drop into a kind of dream state where a plant that had caught my attention would communicate incredibly detailed information about its medicinal uses. The experience was much like sitting and having tea with a friend and having a convivial chat. Well, of course, this kind of thing is strongly dismissed by our culture, presumed to be some kind of anthropomorphic projection, an irrational fantasy. Nevertheless, the experiences kept happening and the information I was getting, when I consulted medicinal herbals, turned out to be accurate.

I am by nature extremely curious and not all that wedded to reductive ways of thinking, so I began to research the experiences I was having. (This was all pre-Internet of course.) In the basement of the University of Colorado library I found a great many ethnobotanical texts that contained interviews with tribal peoples of North America, among them many who used and knew plant medicines. All of them described similar experiences. When asked where they got their knowledge of plant medicines, all of them said from the plants, in a dream or vision.

Over the years, as I have explored this kind of information transmission, I found that it is root to most knowledge, even among scientists. It turns out that kind of dream state is very common among mathematicians (who often experience numbers as alive) and scientists such as Barbara McClintock who won the Nobel prize for her work with corn. She quite clearly talked as if the corn were communicating with her.

In my own experience, I found plants to be highly convivial, intelligent life forms, kindred to us and quite capable of communication with all of the life forms around them. This has been, of course, borne out by much research. Plant neurobiologists now understand that the root system of plants is a highly developed brain, much like our own, and uses the same neurochemicals as we do. It does conflict with older reductive (and extractive) ways of thinking and there is a lot of name calling going on. Still, it is clear that our approach to the natural world, that it is insentient and there for our use in any way we see fit, is not a sustainable way to live. We see the results of that all around us; the future is not looking too good.

JFW: What kinds of scientific experiments have been carried out which indicate that plants demonstrate some form of intelligence?

SHB: I am not all that much a fan of reductive, extractive science which is only one small subset of what used to be called natural science. Cutting up a friend to see what makes him tick never really appeals to me. Despite this, I read a great deal of scientific research, perhaps some 30-35,000 journal studies in the past decade. Jagadis Chandra Bose did a lot of work in the early 20th century on plants that is still highly relevant, though it fell out of favour as more reductive thinking took hold. The people studying allelopathy have found that plants are highly communicative, that they utilise chemical signalling to talk to all the other plants in the ecosystem they are in about what is going on. They send chemical “words” telling about a particular insect predator that might be eating them, make and then release compounds that will deter the insect or even call the exact predator of that insect to that location. They send all this information to all the other plants in the region. If other plants are sick, plants will make and release the compounds needed to heal them. Plant neurobiologists have found that the brain system of plants is extensive, that they have memory, plan for the future, teach new generations, are complex tool makers and users (their chemical abilities far exceed our own), and have neural networks that, in some instances, far exceed our own.

JFW: What are the implications of plant intelligence in terms of thinking about the natural world and our connection to it?

SHB: We are in the midst of changing paradigms. The older, reductive, mechanistic paradigm that looked at the earth as a ball of non-sentient resources we could do with as we please has reached its limits. It is destroying the ability of most life forms to endure, for the ecosystems of the planet, and which allow us to live as well, to endure. Younger and less mentally restrictive scientists in every field are finding that the world around us is far different than the pictures that reductionists have created (and taught all of us to believe). All life is intelligent, none of it is mechanical, and you cannot use the ecosystems of the planet as resources for unlimited extraction.

Understanding that plants are highly intelligent (that every life form in fact is highly intelligent and communicative) forces a foundational shift in our human orientation. If we don’t care we will not be careful, and we as a species are not careful and in fact don’t really care about the other life forms on this planet. But if we kill them we kill ourselves.

The findings of newer researchers don’t bode well for the older system but that older system will fight very strongly to keep itself in place. It is just the way things work.

JFW: What is the significance of plant intelligence in shamanistic societies? Could it be argued that modern science is revealing what shamanistic cultures have known all along?

SHB: All people, and I mean all, know that the earth and everything in it is alive. Four-year-old children naturally know this. They have to be forcefully taught that the world is dead. Ancient and indigenous cultures never killed that sensibility but rather developed it. I don’t actually like the term shamanistic since it refers to a specific cultural practice located in Siberia, but I do know what you mean. Indigenous cultures that understood the world is alive did regularly engage in dreaming and visionary experiences in which knowledge of the world and life around them was directly communicated to them; they were interwoven into the life web of the planet, not separate from it. It was not only indigenous cultures but all ancient cultures as well that knew this, no matter how developed they became.

The thing that we call science has taken the long way around. And yes, they are now getting back to where we started long ago, aware that all of nature is alive, intelligent and aware. That we are merely one part of a very large living scenario… and not all that important a part when it comes right down to it. We are merely one life form sitting in the council of life, a specific instance of a general condition. Still, the mechanical mindset that has been built the past two centuries will take a long time to dismantle; I fear that only as the world’s ecosystems begin to crumble will the species as a whole be willing to change.

JFW: Are there wider philosophical implications associated with plant intelligence? Does it change the way we should think about consciousness in any radical way?

SHB: Of course there are philosophical implications. Monotheism and science have embraced the idea that humans are special, different in nature and essence than all other life on earth. But we are not. In many respects the most difficult thing that any person faces is their own unimportance. How much more difficult then will it be for an entire species to face that and be willing to change?

This interview accompanies an article by Jack Fox-Williams on Plant Intelligence which can be read here.

This article was published in New Dawn 176.
If you appreciate this article, please consider a contribution to help maintain this website.