America’s Masonic Foundations
Many American politicians and televangelists claim a Christian birthright for the United States. In reality the Founding Fathers were not only ambivalent about Christianity, but in some cases even hostile to it. Greg Taylor looks at the forces behind the birth of the American Republic.

The Secret Origins of AIDS: Facts, Fallacies & Conspiracy Theories
When AIDS was officially announced in 1981, the public was told homosexuality and drugs were the root cause of this new plague. Next we were told the disease originated in Africa. Dr. Alan Cantwell brings together all the latest research pointing to AIDS as a man-made disease.

The Mystery of the Maya – Part Two
Ancient American civilisations are known for building majestic pyramids but also for their bloody sacrificial rites. In the concluding part of this article, author Colin Wilson examines some of the unsolved mysteries and enigmas surrounding the Maya, Olmec, Zapotec, and Moche civilisations.

Chinese Triads, Japanese Black Dragons & Hidden Paths of Power
Secret societies are often viewed as a largely Western phenomenon, but their roots reach deep into the ancient civilisations of the East. Mehmet Sabeheddin explores some of Asia’s secret societies and the important part they played in organising resistance to both tyrannical rule and the violent onslaught of European colonialism.

The Alchemy of Time: Understanding the Great Year & the Cycles of Existence
After a lengthy study of the mysterious Great Cross of Hendaye and the French alchemist Fulcanelli, author Jay Weidner believes the cross appears to be describing not only the end of the great four ages of the Hindu Yuga system but also the four ages of alchemical chronological time keeping. Will the current cycle come to a close with the galactic alignment on December 21, 2012? 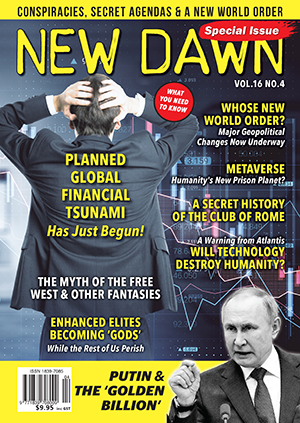