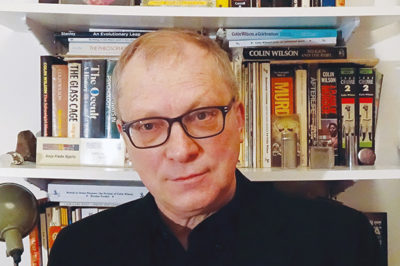 American author Gary Lachman has long called London his home, but I caught up with him during a recent visit to Australia. Compact, quiet and stylishly dressed, Lachman’s gentle scholarly manner belies the fact that he is a child of rock and roll, having come of age during the Punk/New Wave movement in New York and being once a member of the now legendary pop band Blondie.

These days he is a writer and has produced some of the best and most readable and accessible books about occultism and the major figures in the field of Western Esotericism. He has published superb biographies of Madame Blavatsky and Colin Wilson and an extraordinary history of the major figures of the occult tradition (The Secret Teachers of the Western World, 2016), along with extended reflections on magic, politics and the history of thought.

In a noisy, packed Indonesian restaurant, I asked Gary how he developed his interest in the occult.

“In 1975 I was a musician playing in New York,” he said in his companionable manner. “I was playing in Blondie – this was before Blondie became anybody. I was living on the Bowery with Debbie Harry and Chris Stein and they had a kind of kitschy interest in occult stuff. The guy who rented us our loft was a very flamboyant artist who had studied Aleister Crowley and he had a Thoth tarot deck which, at the time, was rather rare. He would do readings with it and I just got interested in it.”

Gary’s biography of the prolific British writer and historian of the occult, Colin Wilson, is a fascinating read and is the book that really made me determined to meet Gary and study with him. His 2014 biography of Crowley is a wickedly good read and the book I recommend to anyone who wants to learn more about the self-styled ‘Great Beast’. I asked Gary how these two men in particular influenced his life.

“During this period [the early 70s] I was in someone’s room and on a bookshelf saw this big book called The Occult [by Wilson, published 1971]. I’d already been reading Crowley, so I pulled it off the shelf and started reading it and it totally grabbed me. He has a wonderful writing style and he was looking at all of this from the philosophy of consciousness. I had read some of the existentialists and Nietzsche, but I really didn’t know all that much and I found this totally gripping work and it was basically the start of it.”

“Not only did it get me interested in the occult, esotericism, mysticism and all that, I became completely devoted to the work of Colin Wilson. I remember that wherever we went on tour I would head to the local used bookstore and look for books by Wilson. I wound up getting a big collection of them and in 1983 I made a pilgrimage to Cornwall, where he lived, and met him.”

“You seem to be someone who uses everything you read,” I said. “Nothing ever goes to waste. How did you get into that habit?”

“Well it was something I picked up from Wilson. He read an enormous amount and he made the effort to connect it all together. I wanted to write the kind of books I liked reading, and I wanted to write those sorts of books where you learn a lot. If you follow up on the books Colin Wilson mentions in his writing, it’s like getting a liberal arts education. From reading him I followed up people like Ouspensky, Gurdjieff, Husserl, Yeats… You follow up on the strands he leaves for you. So, I do that now myself. If I get a commission for a book, I read everything I can about the subject for the first six months or so. Then I spend the next six months trying to write about it.”

Since so much of Gary’s work is about the importance of thinking for ourselves and allowing ourselves the time and space to think deeply, I asked him if he thought we had lost the habit of thinking.

“We’re thinking less and less,” he responded, without hesitation. “I mean, it has never been particularly popular, but people are now letting machines do our thinking for us. I guess that’s one of the problems with the internet, when everything is based on algorithms based on what you have searched – you can’t get out of that loop. I often wonder that if you put Siri and Alexa next to each other, would they be able to have a conversation? Siri says one thing and Alexa something else and we can just let them fight it out.”

Though his work has been almost exclusively centred on the Western tradition, I was curious to know if he’d ever explored any of the Eastern traditions.

“Early on, when I was first reading this stuff, I was quite taken with Zen. I tried to practice for a while, inspired by people like Alan Watts and D. T. Suzuki. More recently I have been interested in Taoism, in the context of Jung’s ideas about alchemy and ‘The Secret of the Golden Flower’ [the Chinese alchemical text that had come into Jung’s life in an act of remarkable synchronicity – see Gary Lachman’s book Jung the Mystic]. I think there’s a great deal to learn from the Eastern traditions.”

I asked him if there were any gaps in 21st century presentations of the history of occultism – was there anyone who wasn’t being written about that deserved a closer study.

“Well, Owen Barfield,” he said. “Not necessarily an occultist, but certainly in the consciousness tradition. And Kathleen Raine, who is one of my heroes. I interviewed her just before she died. She devoted her life to resurrecting what she called ‘the lost knowledge of the imagination’ – that’s where I got the title of my book. It’s a tradition of the imagination that has been rejected in the West. We tend to see the imagination either as make believe or something with practical, utilitarian applications – in the context of innovation or cutting-edge technologies.”

“Raine saw it as a way in which we could actually know the world. There can be a cognitive content to the imagination, and she devoted her life to reviving that. She found it in the Romantic poets that she loved – poets that Barfield loved as well, people like Shelley or Blake. She was a great Blake scholar. If you read Blake the imagination is everything.”

Is “the imagination” another term for God, I asked.

Part of the great thrill of spending time in the company of someone like Gary Lachman is the incredible breadth and depth of his knowledge. A conversation with him veers all over history, religion and literature. He has been a determined scholar since he was a very young man, and now he wears his learning lightly on his sleeve and has a charming way of assuming his conversation companion is as learned as he. Almost inevitably, given the circumstance of two bookish people sharing lunch, our chat turned to literature more generally.

“Well I’ve just finished writing a book about Russia, and Dostoevsky has always been an interest of mine,” he volunteered. “Sadly, the fiction I read now is mostly for entertainment and I have been reading a lot of the Maigret novels by Georges Simenon. I guess you could call it thinking-person’s crime fiction. I used to love fantasy and science fiction and I grew up on Lovecraft. There’s an English novelist called John Cowper Powys who wrote A Glastonbury Romance. That book is a real commitment – it is a huge thick thing. But reading it is a mystical experience; he sees everything from a cosmic perspective. There is a life running through every aspect of the novel, from the protagonist’s loftiest speeches to the most mundane description of landscape. He has a wonderfully mythic consciousness.”

As lunch wound up, I thought I would take a chance at asking him if there was single spiritual path to which he had found himself committed. He allowed that in his youth he had been for a while involved in a Crowley group and then the Gurdjieff work. But now this great polymath is content to exist between worlds.

“I’m interested in too many things,” he said with his trademark impish grin. “I see connections between things and so rather than stick to one school of thought I need to be true to myself. Being constant has its virtues but I want to explore the contradictions and similarities I notice. I don’t belong to anything, but I study whatever I can.”

Gary is currently completing two books, one on precognitive dreams, and another titled The Return Of Holy Russia: Apocalyptic History, Mystical Awakening, and the Struggle for the Soul of the World, to be published by Inner Traditions in May 2020.

Gary Lachman is the author of 21 books on topics ranging from the evolution of consciousness to literary suicides, popular culture and the history of the occult. His work has appeared in many journals, magazines and newspapers. Gary lectures regularly and has appeared in several film and television documentaries. Before becoming a full-time writer, he studied philosophy, managed a new age bookshop, taught English Literature, and was a Science Writer for UCLA. He was a founding member of the pop group Blondie and in 2006 was inducted into the Rock and Roll Hall of Fame. Lachman was born in New Jersey, USA, but since 1996 has lived in London, UK. Website: garylachman.co.uk, Twitter @GaryLachman

This article was published in New Dawn 178.
If you appreciate this article, please consider a contribution to help maintain this website.