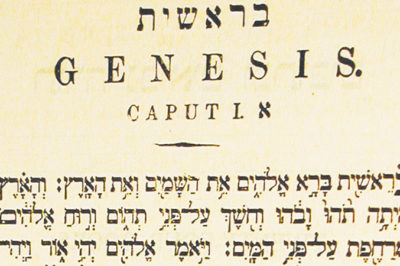 Of the letters in Nero’s name,

And in “murdered his own mother”:

You’ll find the sum is the same.

This piece of doggerel, written on a wall in Rome around 60 CE, points to a widespread (and very likely true) rumour that was circulating about the wicked emperor Nero: that he had his mother, Agrippina, killed.

It is one of the earliest recorded uses of gematria, or isopsephy. By this technique, you add up the number equivalents of letters in the alphabet. If the numbers are the same for two different words or phrases, they are pointing to a connection between the two things – and may even suggest they are identical. This particular calculation was done in Greek. If you add up the numerical values for the Greek letters in Neron (Nero) and in the phrase idian metera apekteine (“killed his own mother”), they both equal 1005.

The verse above was quoted by the Roman historian Suetonius. If Suetonius was right about this story, the use of gematria was so well-known in first-century Rome that it could be used by a juvenile delinquent (although a highly educated one) scrawling a nasty comment on a wall.

Gematria is based on the fact that the alphabets of some languages do double duty as letters and as numbers. This is certainly the case for both ancient Greek and Hebrew, and it makes gematria a particularly fascinating technique when those languages are involved.

Curiously, the most famous use of gematria also concerns Nero. In all likelihood, he is the famous Beast of Revelation 13:18, which reads, “Here is wisdom. Let him that hath understanding count the number of the beast: for it is the number of a man; and his number is Six hundred threescore and six.” Scholars generally agree this refers to Nero, because the Hebrew letters for the words “Nero Caesar” do in fact add up to 666.

This identification also fits the time, since Revelation, at least in part, probably dates from the era of the Jewish War of 66-73 CE, in which the province of Judea rebelled from Rome and was crushed by the Roman army. Nero, whose cruelty was excessive even by Roman standards, was overthrown in 68.

The number 666, being of the Beast, is sometimes contrasted with 888, which by Greek gematria is the number of Jesus.

So where does gematria come from? It is a Hebrew word, derived from the Greek geometria (“geometry”) or possibly grammateia (“grammar”). As we’ve just seen, one of the earliest instances of gematria is based on Greek letters. But the Greeks did not invent it. Perhaps the Babylonians did. The oldest known use of gematria appears in an inscription from the reign of the Babylonian king Sargon II (727-707 BCE). It says that Sargon built the wall of the city of Khorsabad “equivalent to the value of his name,” which, according to Babylonian calculation, was 16,283 cubits.

Nevertheless, it was the Jewish tradition, particularly its mystical strain known as the Kabbalah, that took gematria the furthest. The single best-known use of gematria has to do with the word chai (“life”), whose numerical value equals eighteen, making eighteen a traditionally lucky number for Jews.

Thirty-six, twice eighteen, thus pointing to two lives (presumably a heavenly as well as an earthly one), is a still more important number. According to Jewish tradition, at any given time there are thirty-six righteous people on Earth for whose sake the world is preserved, no matter how wicked it may become. Their identity is known to no one, for the most part not even to themselves. If anyone claims to be one of them, it is a sure sign that he is not.

Thirty-six may have another meaning as well: it is written with the Hebrew letters lamed and waw, or vav, which equal thirty and six respectively. These letters spell the word lo, “to him,” possibly indicating these thirty-six belong specially to God. The thirty-six righteous are sometimes known as “lamed-vavniks.”

Far more famous than gematria, of course, is numerology, which is based on the same principle. Although this method seems more artificial in English and other modern languages, whose alphabets do not serve as numerals, it has been undyingly popular. It generally focuses on determining an individual’s fate by adding up the numbers associated with the letters of her name, or sometimes the numbers of her birthdate. There are innumerable guides to numerology available. One concise account I found helpful can be found in chapter 2 of Richard Cavendish’s book The Black Arts (published in the UK under the title The Magical Arts).

Gematria in its most standard form (there are many variants) uses the actual numerical value of the Hebrew letters. Vav, the sixth letter, stands for the number six. Yod, the tenth letter, stands for ten, and so on. But there is another, more esoteric value for numbers based on a complex but fascinating system.

There are twenty-two Hebrew letters as there were in the Phoenician alphabet from which it derives. And the number twenty-two has a little-known mystical significance. It comes from the fact there are exactly twenty-two regular polygons that can be inscribed in a circle.

Why should this idea have any importance? Probably because the circle, whose dimensions are based on pi, an irrational number, represents the unseen – thus heaven. The polygons, all of which have dimensions that can be expressed in rational numbers, represent the visible – thus the earth. These twenty-two figures would thus symbolise the interaction of heaven and earth.

This schema is, as far as I can tell, almost unknown in the English-speaking world. I have come across it in two sources, both originally published in French: La Bible, document chiffré (“The Bible: A Coded Document”) by Raymond Abellio, and Gnosis: Study and Commentaries on the Esoteric Tradition of Eastern Orthodoxy by Boris Mouravieff. The latter has been translated into English; the former has not.

Mouravieff adds another dimension to this picture. In the first place, he says this system was expounded esoterically in the 118th Psalm. This psalm, the longest by far, consists of twenty-two stanzas, each of which corresponds to one of the Hebrew letters. The eight lines of each stanza all begin with that letter. I have never found it easy to find these deeper meanings in this psalm, but that doesn’t mean they don’t exist.

In the second place, Mouravieff gives a table of the esoteric meanings of these numbers. Although he insists they are not equated with images in the esoteric Christian tradition and he does not mention the Tarot, his list bears a striking resemblance – at least at some points – to the Major Arcana of the Tarot deck.

For example, according to Mouravieff the key of three has the meaning “Love (coming from the feminine principle), Queen of the Heavens.” It’s easy to see the resemblance between this description and the Empress card, the third of the Tarot trumps. The key of thirteen has the meaning “fall, decomposition, death.” Anyone familiar with the Tarot will immediately see that this corresponds directly to the thirteenth trump, which is Death. The key of fifteen has the meaning “thought, calculation, lie, illusion,” which again corresponds neatly to the Devil card.

The last number is of particular interest. The twenty-second trump has the meaning “the Whole, in Space and Time as well as out of Space and Time, comprising the perceptible and the imperceptible, the imaginable as well as the unimaginable.” The twenty-second figure is the 360-gon, which has 360 sides. Although I have never seen a drawing of this figure, I would imagine that its sides would be so small that you could be fooled into thinking it was a circle. It is striking, then, to recall that the twenty-second Tarot trump is the Fool. Moreover, its number is given as zero in most decks, which again resembles a circle.

This system of polygons in the circle may provide a link between the Tarot and the Hebrew letters, which was posited by the French magus Éliphas Lévi in the nineteenth century, but most scholars today no longer take seriously. It’s possible, then, that the Tarot trumps were not modelled on the Hebrew letters or vice versa, but they were both inspired by the same geometrical schema.

What is the value of this numerological knowledge? I doubt it has the kind of practical application that will enable one to cure cancer or blow up cities. Its power lies at another level. Mouravieff hints at how one might use it: “Each of these Numbers in its turn contains a whole bundle of ideas, bound together by a general idea that often escapes the mind that is still untrained in this contemplative research.” Contemplation of these ideas and figures is as much the point as any factual knowledge it may convey.

Thus, as with other esoteric codes, mere information is only a small part of the picture. The knowledge involved is not merely a collection of facts, but the perception of interconnections between things that had previously seemed separate and isolated. This kind of practice, we can surmise, is a way of training and integrating the mind. In this way it helps the individual consciousness to correspond more closely to the primordial, integrated Unity that underlies all things.

This article was published in New Dawn 148.
If you appreciate this article, please consider a contribution to help maintain this website.