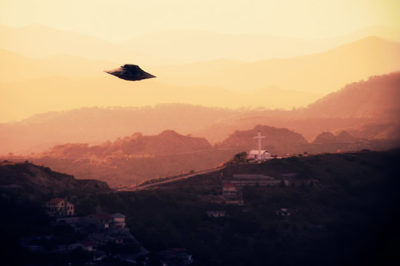 Everything begins with a long letter in which George Hunt Williamson reacts to an 8-page interview with Erich von Däniken in the August 1974 issue of Playboy magazine. From the very first lines of his letter, Williamson disputes von Däniken being called the father of the ‘ancient astronaut’ theory. Williamson was upset that von Däniken had failed to acknowledge him as originating the theory that early humans were visited by extraterrestrials.

I sought to verify whether George Hunt Williamson was mentioned in any of von Däniken’s works but came back empty-handed… although he is mentioned, but not directly. A book by Williamson is listed twice: Secret of the Andes (1961). Did he wrongly accuse von Däniken? Not at all because Secret of the Andes was published under his pseudonym ‘Brother Philip’! It is my contention that von Däniken was not aware that the mysterious ‘Brother Philip’ was in reality the enigmatic ‘father’ of the ‘ancient astronaut’ theory, George Hunt Williamson.

Investigation of a Brother

Secret of the Andes was released under the alias of Brother Philip, curiously so given that his previous work dating from 1959, Road in the Sky, had known much success. When Secret of the Andes appeared in bookstores, the name George Hunt Williamson no longer legally existed because he had changed his identity to Michel d’Obrenovic, resuming the surname of his Serbian ancestors.

The book offers us only two bits of information about the person credited as author. First of all, at the beginning of chapter seven, it is said that “the Scriptorium of the Monastery [of the Brotherhood of the Seven Rays] is under the direction of its Prior, Brother Philip,” adding that “this chamber houses documents and records, codices and parchments of the world’s greatest and most ancient civilizations.” This second allusion, even more minimalist, is in the second half of the book entitled Transcript of the Hierarchy which gathers, within 86 pages, communications received through “vocal channeling.” One of these communications is attributed to Brother Philip.

As will be understood, Secret of the Andes is an inspired work and certainly the most mystical of Williamson’s works. In my book Mystical Journey, I point out that George Adamski’s meeting with an extraterrestrial on 20 November 1952 near Desert Center, California – which Williamson witnessed – opened the way to esotericism in ufology. Secret of the Andes signifies a particular evolution in Williamson’s mystical vision of the world, a conception that from then on is resolutely neo-gnostic.

Secret of the Andes must be seen as the result of a collaboration between several external information sources, of a spiritual or supra-terrestrial nature, whose ‘channel’ was George Hunt Williamson. As a matter of fact, the voice of Brother Philip, this signature of Williamson, is echoed in three chapters of his previous book, Road in the Sky, in which his Peruvian adventure of 1957 had already been touched upon.

If Brother Philip did not actually write the book, then he certainly inspired it, because it is he who made initial contact through the ‘voice channel’ of Williamson at the end of December 1954 in the presence of his wife Betty Jane and three other people whom they met that day for the first time: Charles and Lillian Laughead and Dorothy Martin. The session took place in Oak Park near Detroit at Dorothy Martin’s home.

A large part of the communications which are grouped in the second part of Secret of the Andes were realised by Williamson serving as the “vocal channel” of entities evolving on different planes of existence. Not included verbatim in the book, a communication from Aramu-Muru on 18 April 1956 sparked the group’s departure to Peru:

Having sold all their goods, the group took off on 2 December 1956 from Prescott’s airport, first for a stopover in California, then off again for Mexico, and finally for Peru.

They relinquished everything and left in search of the path of Lord Aramu-Muru and his Monastery of the Brotherhood of the Seven Rays, hidden in a legendary Valley of the Blue Moon in the snowy mountains bordering Lake Titicaca.

In Lima they were joined by some other members. They all spent Christmas in Moyobamba. The Laugheads then chose to return to the United States. In mid-March, the Williamsons and the rest of the group, after many incidents, setbacks and otherdifficulties, were able to set up a “priory,” the Abbey of the Seven Rays. This established, on the physical plane, a kind of outpost of the Holy of Holies, the Monastery of the Brotherhood of the Seven Rays, which remained invisible to the eyes of the vulgar within the mists of a mountain north of Lake Titicaca.

This abbey was set up far from everything, at 250 km east of Lima, in the region of Junin, at the bottom of a “hidden valley” in the mountains of Pariahuanca.

Two large buildings constituted the main part of the abbey. A third one built by the group was used as the “Scriptorium.” It was, in fact, the office of Williamson containing his library. It was there that he wrote Road in the Sky and drafted Secret of the Andes. The abbey’s purpose was to welcome all those who wished to experience life based on the rites of an Essene community and to initiate them “into physical, mental and spiritual illumination.”

A Little Help From…

Taking care of the community of the Abbey was not an easy task for the Williamsons; the coming of his associate John McCoy at the end of March allowed George some release from it, allowing him to lead ambitious missions of exploration in the country. The sole chronology of the discoveries or the works he made in 1957 in Peru speaks for itself.

February, an essay of mapping of the Great Wall of Peru.

As we can see, Williamson was quite busy. All these missions appear in Secret of the Andes, with the exception of the discovery of Pomatana which took place in September (the book’s narrative concludes at the end of July 1957). Having in my ownership his notebook of exploration, which I call the “black notebook,” covering the period July to October 1957, I was able to determine that all the information in Secret of the Andes pertaining to the missions of exploration comes from the notebook. Williamson did not add anything, and did not ‘fictionalise’ in any way.

Secret of the Andes turns out to be the faithful and dense summary of a whole thick corpus of data, incredible facts and extraordinary circumstances, of which he was at the same time the protagonist, the witness and the messenger, where mysticism, esotericism, archaeology and inter-dimensional contacts are intertwined.

Locating the Monastery of the Seven Rays

We now come to the heart of the matter: where is the Monastery of the Brotherhood of the Seven Rays?

Until now we have made mention of the first two stages of the little group and their leader George Hunt Williamson: first in Moyobamba, then in a “hidden valley” of Pariahuanca, at the Abbey. The monastery, which would be the third and ultimate stage, still remained in the future. Secret of the Andes says it is nestled in the mountainous region north of Lake Titicaca. We thus have three completely distinct places, Moyobamba, Pariahuanca and Lake Titicaca, all separated by hundreds of kilometres. Those who have written about Secret of the Andes – having no access to the personal documents of Williamson now in my ownership – had no knowledge of the exact locations of the first and second stage, respectively in Moyobamba and Pariahuanca. Hence commentaries contain understandable errors but also gross blunders resulting from an unfamiliarity with the book and an obvious lack of rigour.

Did Williamson conduct research to discover the monastery? The answer is yes! But he had no possibility of carrying out his plans as he wished to, life having decided otherwise: Betty Jane died at 32 years old on 11 August 1958 in Lima of complications from a chronic disease. At that moment Williamson was on a lecture tour in Europe. Shattered by the terrible news, he flew back to Peru. He had no other choice than to leave the country for his small son, who now had no mother, and return to Arizona.

When in 1959 Williamson returned to Peru, to carry out further investigations around Lake Titicaca, it would be for the last time. He wished to return there at the end of the 1970s but his poor health prevented him from doing so; he delegated some friends to conduct research missions on site, for instance a well-known Broadway composer whose name is in my file.

But did Williamson locate the monastery? I can reveal that in a letter dating to 1978 Williamson claims knowing the location of the Monastery of the Brotherhood of the Seven Rays and supplies a precise indication which I will keep confidential for the time being to give me some latitude to evaluate it.

We now understand that for Williamson the monastery did exist. In my opinion, it is necessary to envisage this Mystery School rather as an “Out of Time Place,” because in chapter 6 of Secret of the Andes it is clearly stipulated that in 1957,“all the Retreats and Sanctuaries of the Great White Brotherhood had been lifted into a higher spiritual vibration.” This meant these places continued to exist only in a superior octave, a parallel world coexisting with ours. For Williamson, this operation of a magical or esoteric nature did not totally hinder access to this Initiatory School, this inner sanctuary. Although only rare chosen ones can hope to approach the access door of this Star Gate of the Andes.

I would like to underline the peculiar destiny of Secret of the Andes. This little book has indeed lived some sort of occult existence of its own, ending up in unique and very strange mutations. While a marginal classic of esotericism in the 1970s, the book introduced the spirituality of Peru to a whole generation of young people, and its influence developed in other untraceable and subterranean ways.

It has done so with a mysterious constancy to the point that today it is so distilled into all that is written about Peruvian mysticism that neither the title of the book nor its author are even cited. It’s as if the contents of Secret of the Andes had always been an integral part of the ancient Peruvian mysteries.

There are numerous examples of this role played by the book and ultimately Williamson / Brother Philip. Here is a representative one, found on the home page of a travel website specialising in Peru:

“…Legend tells of an Inca priest called Aramu Muru who belonged to the Monastery of the Seven Rays – where cult worship of the sun took place – who set out on foot from Tiahuanaco to Cuzco carrying a gold disc. Along the way he disappeared and was never seen again.”

The legendary narratives of Peru derive from the epic of Aramu Muru! No mention of Brother Philip! No crediting Secret of the Andes! The text has definitively transmuted itself into unmovable Peruvian mythology.

Whether it be Aramu-Muru and his soul mate, Arama-Mara, the Monastery of the Brotherhood of the Seven Rays, the Golden Sun Disk of Mu, Marcahuasi, Pusharo, Paititi, without forgetting the latest one, the famous “interdimensional Amaru-Muru Doorway” at Juli on the southwest coast of Lake Titicaca – all that has been written these last years on Peruvian mysticism finds its source in Secret of the Andes.

Williamson would no doubt have found it both amusing and rewarding to see that whole pages of his book were stamped with the label “Inca legends.” Nevertheless, wouldn’t he have also experienced a small pinch in the heart to know that his book and its author have again been swept under the carpet?

This article was published in New Dawn Special Issue Vol 13 No 1.
If you appreciate this article, please consider a contribution to help maintain this website.