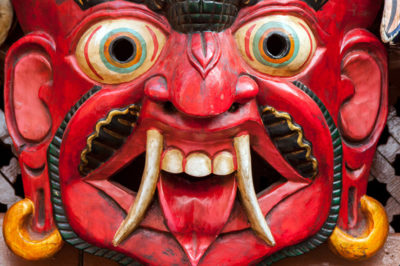 Authors note that fictional characters have a tendency to take on a life of their own. But few readers realise just how literally they mean it. A friend of mine, engaged in writing a romantic novel, called me in a panic just a year ago to complain that two of her characters had just run off and got married… thus ruining her carefully-crafted plot.

In theory this should not have been a problem. From her god-like perspective, the writer could surely have deleted the relevant passage and written a new one that put her creation back on track. In practice, any attempt to rein in characters like that will produce an almost unreadable novel, full of wooden dialogue and contrived situations. The only viable answer is to let them go their own way, abandon any preconceived plot notions, and see what ‘really’ happens.

The popular American science-fiction writer, Ray Bradbury, was so intrigued by the phenomenon that he wrote it into one of his own books. The Martian Chronicles describes how visitors to the red planet are confronted by characters from classical fiction who had somehow taken on corporeal existence in the alien environment.

Curiously, Bradbury’s idea – that fictional characters might, in certain circumstances, take on solid form – had widespread currency in Tibet. Such creatures were known as tulpas and at least one European traveller claimed to have seen them.

Madame Alexandra David-Neel, a distinguished French academic and explorer who died in 1969, reported that while camped in the Tibetan highlands, she was visited by a young painter she knew vaguely from a previous stay in Lhasa. The man had a particular obsession with one of the many Tibetan gods. For years he had meditated daily on the deity and painted its image many times. As he entered the camp, Madame David-Neel claimed she saw a misty representation of the god hovering behind him.

She was so intrigued by this phenomenon that she studied Tibetan teachings about tulpas and eventually decided to create one for herself. To this end, she visualised a cheerful brown-robed monk, based loosely on Friar Tuck in the Robin Hood legends. After weeks of effort, the imaginary monk became so vivid that he appeared to her as if he were physically present – an induced hallucination.

But then, says Madame David-Neel, the monk began to turn up when she was not trying to visualise him. Furthermore, his appearance was changing: he grew thinner and developed a sly expression. When other members of her camp asked about the ‘strange little lama’ she decided the time had come to destroy her creation… and battled for weeks before finally managing to do so.

Could such a thing really be possible?

During the early 1970s, a group from the Toronto Society for Psychical Research set out to see if they could make a ghost. First they dreamed up a fictional character, then invented a background to go with him. The character was named Philip and lived at the time of Cromwell, in a house called Diddington Manor. He fell in love with a beautiful Gypsy woman named Margo and subsequently had an affair with her. When his wife found out, she took her revenge by accusing Margo of witchcraft. Margo was tried, convicted and burned at the stake. Philip, mad with grief, committed suicide.

There actually was a Diddington Manor and pictures of it were obtained by the group. The rest of the story was fiction. Philip never really existed. But that didn’t stop him haunting.
The group held a series of séances with photographs of the manor placed around the room while they concentrated on the fictional Philip. For several months nothing happened. Then a rap was heard. The group set up a code and communication was established. Sure enough, the communicating ‘spirit’ turned out to be Philip, claiming the life history they had invented for him.

As the séances continued, the fictional Philip continued to behave exactly as séance room spirits have always behaved. He caused raps and brought through such a richly detailed description of the Cromwellian period that the group actually double checked to make sure they’d not somehow based Philip on a real life character. (They hadn’t.) Later, the Toronto experiment was duplicated by other groups. One of them dispelled any lingering doubts about the fictional nature of the spirit by communicating with a talking dolphin.

Although Philip was a step removed from the sort of visible ‘spirit’ appearance reported by Alexandra David-Neel, he did manage to produce physical phenomena like raps and table turning, which suggests the psychological mechanics of the two experiments may not have been all that different. But if certain persistent accounts are to be believed, the techniques used for creating ghosts went far further in Tibet than they ever did in Canada – and generated a valuable spiritual lesson in the process.

One of the most fascinating stories involves a mythic creature called a Yidam, a tutelary deity in the Tibetan pantheon.

In Tibet, many young men (and some young women) suffering from a spiritual itch, apprenticed themselves to a single guru rather than follow the traditional monastic route. A few of them who showed real spiritual promise would eventually reach the point where their guru would admit he had nothing more to teach them. If they wanted to go further, they would need a far more advanced guide. To that end, the guru would advise them to meditate on the Yidam and study pictures of it in the sacred scriptures. These showed the creature to have a fearful, almost demonic aspect.

When the student was saturated in Yidam lore, he would typically be advised to find a remote cave and there create a magic circle (known as a kylkhor) using powdered chalk. The purpose of the circle was to encourage the visible appearance of the Yidam.

In order to achieve this, the pupil was instructed to visualise the Yidam within the circle. Over a period of weeks, or months, the pupil had to continue the exercise until a full-scale hallucination resulted and the Yidam appeared. At this point, the pupil would be told he was obviously favoured by the god.

But for his next step, he would have to persuade it to leave the circle.

The process might take several more months, but eventually the pupil would report that the god had stepped out of the kylkhor. He would be congratulated, then told to see if he could manage to get the Yidam to speak to him.

Once this was achieved, the goal-posts were moved again. The pupil was required to receive the Yidam’s blessing, a process that, in Tibet, involved the laying of hands on the pupil’s head.

Once the pupil reported positively on this latest task, the guru would typically tell him he had only one more step to take. He had achieved conversation with and blessing from the Yidam, but it was still confined to the cave. In order to establish the deity as his personal guru, the pupil had to persuade the Yidam to leave its circle and accompany him wherever he went. Off went the pupil to his Himalayan cave again.

With the benefit of our tulpa studies, we might suspect that the pupil was creating a fictional character, albeit one based on scriptural authority. While the appearance of the Yidam is a matter of visualisation, any conversations must require essentially the same creative input as an author writing dialogue.

The gurus who developed the exercise clearly recognised its tulpa aspect as well, for the whole experience was actually a test. If the pupil succeeded in creating a Yidam that would walk and talk with him, his teacher would tell him his studies were ended since he now had the wisest and most powerful teacher possible. But the pupil who accepted this evaluation was deemed to be a failure – and sent off to spend the rest of his life locked into a comforting hallucination.

There were, however, a few pupils who expressed doubts. They might begin to wonder if the Yidam was the god they believed it to be, or an aberration of their own perceptions. Often the guru would feign anger and send them back to the cave to redouble their efforts. But if the doubts persisted, then came the crunch.

The pupil agrees that he sees, hears and feels. He agrees that the Yidam seems as real and solid as the Himalayas. And yet he doubts.

At which point the guru springs his trap. The experience of the Yidam is not simply a lesson in tulpa creation. According to the insights of Tibetan spirituality, human perception of the ‘real’ world is fundamentally flawed. Not just its politics and values, not just its preconceptions and ideas, but its very structure is something other than what it appears. The world as we know it – from our friends to ourselves to the mountains above and the valleys below – ismaya, a word imported from India that translates as ‘illusion.’ What happens in the creation of a Yidam proves that absolutely.

An eerily similar theme underlay a popular Hollywood movie called The Matrix. The premise of The Matrix was that at some point in the distant future, humanity fought an apocalyptic battle against intelligent machines… and lost. With commendable efficiency, the machines decided to use captive humans as a power source. (The human body generates a measurable amount of electricity.)

To avoid any possibility of a resistance, the machines wired their captives’ brains into a central computer running a complex program that created the illusion of day-to-day reality. Although actually stored neatly in nourishment tanks, the population of our defeated planet slept on, convinced that the world of offices and jet planes functioned exactly as it always had.

The idea is not a new one, even in our materialistic West:

“And then…?” the Emperor Claudius asks of the Sibyl in Robert Graves’ I Claudius, on discovering he is dead.

“Then you shall dream a very different dream,” the Oracle replies, referring to Claudius’s next life.

Among spiritually-enlightened Tibetans, the notion that we all live in aMatrix-style illusion is widespread. But the illusion is not maintained by rogue machines – it is generated by our own minds. When I first came across the doctrine, I was forcibly reminded of a saying you hear every day in Haiti: What you see… it’s not what you think.

At least one (American) Buddhist attempted to convince me the Tibetan doctrine was purely philosophical. She believed it to be essentially a question of emphasis, in the way that a handful of American deaths might seem more real (to Americans) than a million famine victims in distant China.

Her stance was sophisticated, her arguments psychologically enlightened, but even our own Western physicists know better. Investigations of the quantum world of sub-atomic particles reveals a universe founded on no more than statistical probabilities and built with little bits of something that appear out of nowhere, exist momentarily before vanishing again… and are profoundly influenced by human observation.

Physicists have now become accustomed to thinking mathematically about an 11-dimensional space-time continuum that looks nothing like the world we live in.

The only difference is Tibetan mystics seem to experience it directly.