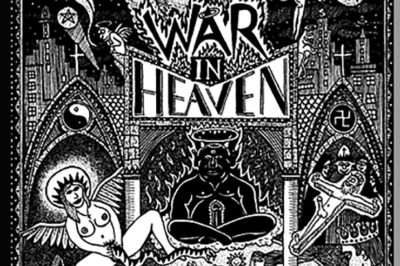 It is one of the most familiar and reassuring lines in scripture: “The Lord is my shepherd.” But when you think about it, the metaphor is a disturbing one.

It’s true that a shepherd looks after his sheep. But he also shears them and kills them and eats them. Does the God we adore act totally with our best interests at heart, or are we a species of livestock that he uses for his own ends?

Voices have occasionally uttered doubt, not about the existence of the gods, but about their beneficence. The ancient Gnostics said that the real god of this world was the Demiurge, a second-order being who mistook himself for the true God. The spiritual teacher G.I. Gurdjieff told a parable about a lazy shepherd who got tired of having his sheep run off, so he hypnotised them into thinking they were men or lions. Then they no longer ran off but stayed around so that he could shear or kill them as he liked. (Again we encounter a shepherd, this one more explicitly malevolent.)

Gurdjieff does not say who this shepherd is. His main point is that man, in his state of waking sleep, is at the mercy of forces that may well not have his best interests at heart – forces that will extract energy from him regardless of his wishes.

This parable is from an early period of Gurdjieff’s teaching; in his later period, epitomised in his magnum opus All and Everything: Beelzebub’s Tales to His Grandson, he portrayed the universe in a more beneficent light. But there are plenty of others who have cast doubts on the motives of the spiritual powers that control our lives.

One of the weirdest is found in a book called War in Heaven by Kyle Griffith. Originally it appeared in 1988. It has never been published in a conventional sense; I first read it years ago when I was editor of the esoteric journal Gnosis and there was a spiral-bound copy lying around the office. Today it can be downloaded for free at www.bibliotecapleyades.net/vida_alien/warinheaven/warheaven-III.htm.

Comparatively little is known about Griffith himself. From my sources, I gather that he lived in the San Francisco Bay Area in the 1980s, the time when he put his book together.

From a certain point of view, War in Heaven may look mad; from another, it is strangely compelling. I have read it three times over the years. While I’m not prepared to take its claims at face value, I find them both haunting and disturbing.

Griffith’s vision allegedly derives from his telepathic communication with some spirits who say they are associated with the Invisible College. This was the name of a seventeenth century English coterie that was devoted to esotericism, philosophy, and the nascent discipline of science; it is usually seen as a precursor to the Royal Society. Unlike the scientifically minded gentlemen of Britain, the Invisible College of Griffith’s vision consists of disembodied spirits who claim to have inspired the Rosicrucian and Freemasonic movements of the early modern era; more recently, they were behind the civil-rights movement in America and the psychedelic revolution of the same period.

All of these movements were designed with one end in mind: to break the hold of the Theocrats.

The Theocrats, in the cosmology of War in Heaven, are parasitic astral entities who devour the souls of the recently deceased. The normal course of the soul’s evolution involves repeated reincarnations on earth. But these incarnations, as we well know, can be extremely unpleasant at times. The Theocrats have avoided this disagreeable option by maintaining a semiperpetual existence on the astral plane, fed by the souls they eat. Their strategy is simple. When a naïve soul has died, they greet it on the other side by proffering illusory welcomes into a fake heaven, populated with familiar religious figures and loved ones. When the soul has strayed into their trap, it is devoured.

To make this vision even more disturbing, Griffith (or his guides from the Invisible College) contends that practically all of what we think of as religion is nothing more than a Theocratic ruse.

The stages of this religious development, as portrayed in War in Heaven, bear some examination. The first stage was essentially shamanism. This is a crude and primitive form of religion – from the Theocrats’ point of view, that is, not from ours.

Shamanism, we are told, fosters individual psychic development, and as such, it is of limited value to the predatory Theocrats, who benefit much more from the collective trance that conventional religious worship produces. As a result, the Theocrats had to refine and update their methods of mind control.

Second-stage religion was a dead end. It involved large-scale human sacrifice. And history shows that civilisations that had such practices came to a bad end soon. Ancient Carthage, the great rival of Rome for domination of the Mediterranean, was one example. When the Romans decisively defeated Carthage, they razed the city and sowed the ground with salt. Salt is traditionally a substance used for purification, and some have said the Romans did this to cleanse the land from all the human sacrifice that had taken place there. Aztec civilisation, which in many ways was superior to its European contemporary, was another example: for all its might, it was destroyed by a few hundred Spanish adventurers on horseback.

“The third stage of Theocratic religion,” Griffith writes, “involves mass animal sacrifices. Although they prefer human souls, Theocratic spirits can nourish themselves off the astral souls of lower animals to some extent.”

If this were true, it would cast a weird but revealing light on what I have characterised in the accompanying article as the religions of the Age of Aries. They were so obsessed with animal sacrifice – which otherwise seems to be rather a pointless activity – because the Theocrats wanted it.

“However,” Griffith adds, “the astral tissues of animal souls aren’t very compatible with the astral souls of the Theocrats, so they are not a good food source.” To solve this problem, the Theocrats invented fourth-stage religion – the religions that most of the world knows today. Here “Theocrats use religious mind control to delude souls into deliberately putting themselves under Theocratic control after death, thinking they are entering ‘eternal bliss in Heaven’ or ‘union with the Godhead’.” These religions are essentially those of what in the accompanying article I have called the Age of Pisces.

By this view, the gods people worship – whether they are called Christ or Allah or Krishna – are nothing more than parasites on the astral plane who keep themselves nourished by souls of the innocents they prey on. Originally the Buddha was different; he experienced a genuine awakening and thus showed little respect for the traditional Vedic gods of his culture. But his later followers, who distorted his teaching into a religion based on faith in Buddha, became subservient to the Theocrats.

Oh, and by the way: “The Theocrats want religious believers to feel guilty every time they feel sexual desire or enjoy any ‘pleasures of the flesh’. The guilt literally addicts them to attending church services that subject them to religious mind control.”

There have been few more disturbing portraits of the religious history of humanity than this.

To deliver the hapless beings of the human race from this dire situation, certain advanced souls from other planets came to the astral atmosphere of Earth a few centuries ago. They, along with some enlightened human souls who have managed to avoid the Theocrats, constitute the Invisible College. While the Theocrats have been sending telepathic suggestions to their unsuspecting followers on this plane, saying that all you have to do is believe in the Theocratic gods and trust them, the Invisible College has been transmitting the opposite message: to avoid worship and above all to think for yourself. They inspired the Rosicrucian and Masonic movements of the seventeenth and eighteenth centuries, as well as the accompanying impulses toward democracy, freedom of thought, and even atheism. After all, it is better to believe in no God at all than to open yourself up to a parasitic astral deity.

According to Griffith, much of the 1960s counterculture was stimulated by the Invisible College. LSD, rock concerts, and similar gatherings were designed to create a different kind of trance – one that would telepathically open people to the idea they should think for themselves.

But the story does not stop there. This effort has led to a reaction by the adversary – “fifth-stage Theocracy,” which “employs electronic mind control instead of religious mind control, and… can enslave people who subscribe to belief systems other than those of organised religion.” Some groups originally inspired by the Invisible College are co-opted by the adversary. Griffith writes, “Every new rock group starts out with a few normal protest or love songs. Then they get swallowed by a group mind controlled by fifth-stage Theocrats, and from that point on all their songs sound as if they were written by the same person.”

It’s not possible here to go further into Griffith’s bizarre but fascinating vision. But there are some things that keep me from dismissing it entirely. The first is the collective madness of the human race – its pathological desire to rage and destroy, its hatred of its benefactors and its insane worship of its most vicious victimisers. There is a point beyond which we cannot explain this by mere mammalian aggression – which, as a matter of fact, does not have such destructive properties in other mammals. Psychology and sociology have no explanations for this mass insanity and show little interest in finding them. If there were such entities on the astral plane trying to control and manipulate us as Griffith says they are, this behaviour would at least be comprehensible.

Another is the powerful collective urge toward what Gurdjieff called the “waking sleep” of man. It is true that, in the West at any rate, mass hypnosis by low-grade religion is losing its hold. But no sooner has this happened than we see a whole new series of mechanisms for putting people back to sleep – the “electronic mind control” that Griffith mentions. It is very hard to go into a public place and see people bewitched by their laptops and smartphones without wondering if something like this is going on.

I don’t think War in Heaven offers a total explanation for the human condition, but I suspect that it has a measure of truth. There do seem to be invisible forces that, for reasons that are difficult to determine, benefit from the collective waking trance of humanity.

Griffith concludes his work with a quasi-apocalyptic vision of the End Times. It is close enough to the End Times as portrayed by Christianity that I have trouble taking it at face value. And while I suspect there are low-grade spiritual entities that very much resemble the Theocrats described here, I am not so convinced that they explain everything about human religious aspiration.

In any case, Griffith and his invisible mentors have some advice for keeping out of Theocratic control. In the first place, make a conscious effort to develop your own psychic powers during this life. In the second place, “read accounts of point-of-death experiences and learn to recognise the common tricks that the Theocrats use to enslave the unwary after death.” In other words, those accounts of near-death experiences are true – but they’re not to be taken at face value. That’s probably a sound rule of thumb for all spiritual experiences – no matter how good or bad they seem.

This article was published in New Dawn 142.
If you appreciate this article, please consider a contribution to help maintain this website.