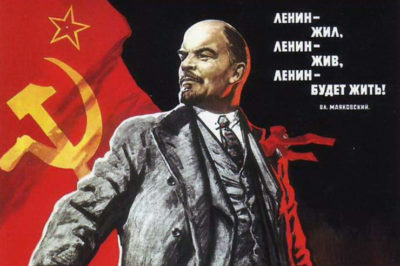 I didn’t like [Vladimir Ilyich] Lenin (1870–1924) before. Everyone around me was saying: “Lenin, Lenin….” The majority is always wrong. During the Soviet Era, I used to take my small son out to spit on Ilyich statues. At the time, I read Evola and Malynsky and believed that Lenin was a main counter-initiatic agent of the “modern world,” who destroyed the last stronghold of Tradition: the Russian Orthodox Empire.

I scoffed at Lenin and despised Leninists, and on seeing citations from his works, I felt like pouring boiling water on the authors who used these citations. Let us remember that, in those days, the overwhelming majority of present-day liberal reformists were enthusiastic Leninists, glorifying Ilyich with their always ready little tongues, coiling in their jackets, wriggling and squealing as in a damp, cozy hole.

I was born too late to witness a period when people sincerely believed in Lenin (and Stalin) as a divinity. I came to live in a sickening decomposing Sovdepia, where no one knew or believed in anything any longer, bending over to whomever was in power at the moment. I thought that Lenin was a dark idol (tagut), raping the later-day Soviet Untermenschen while they grunted with pleasure.

I was mistaken. I too was completely seized by the general atmosphere of decomposition, but came to a conclusion (absolutely inadequate, though) opposite of the conformist crap. I thought Leninism was the name of the anti-traditionalist hypnosis. Simply put, I hadn’t been to the West, and I couldn’t imagine that humanity could have degraded so much even without any Leninism. I assumed that the fourth proletarian estate was below the third, the bourgeois estate (as asserted by Evola), and, therefore, treating the far-away and unknown capitalism as an evil (but of the second order). I sincerely believed that Lenin was one of the faces of the Antichrist, a Russophobe, Westerner, and enemy of Traditionalism.

My attitude towards Lenin changed during perestroika. I was particularly shocked during my first trips to Europe. The picture I saw was so repellent, so degenerative, stiff, totalitarian, untermenschist, only with the untermenschism of the people in the West, as opposed to that of the Soviets. It was not passive and absurd, but rather so triumphant, conceited and optimistic, complete and aggressive that I began to reconsider my attitude to the Soviet Fatherland.

At the same time in Russia itself, the most repulsive scum that most exasperated me physiognomically and typologically in the Later Sovdepia turned into “democrats” and “reformists”. The more vile and ugly the person was, for example, Yegor Yakovlev, the author of the most mendacious “Leniniana” of them all, or his namesake Alexander “Small Shoe” Yakovlev, of the CPSU Political Bureau, the “architect of perestroika,” the more shamelessly and harshly he abused and destroyed the Soviet system. On the contrary, in the position of diehard Soviet conservatives, one could definitely discern hardly expected dignity, ethics, stoicism, and fidelity.

Gradually, these emotions became stronger through my research of common geopolitical themes. A distance, although small, from the Later Soviet period allowed me to view the situation all the more dispassionately, and then a concept began to grow on me that the Soviet society was by no means an expression of the modern spirit and anti-traditionalist Western plague, but a special, confused, and muddy, but nevertheless violent, thrust of a great people to break free from the dark clutches of the present-day Antichrist. In other words, I perceived in Soviet society a paroxysmal attempt to defend certain fundamental principles of traditional society against Western liberal-capitalist entropy.

The Marxist model cannot be called “traditional” in the normal sense of the word, but in comparison with the liberal model, it has far more features of a traditional society. When it comes to a historical choice, this distinction acquires a special great meaning.

At this stage, the pro-Soviet positions of Eurasianists and National-Bolsheviks became quite clear and close to me. They turned out to be the only positions sustained by history, whereas the narrow communist constructions or white-guard myths were obviously untenable and disproved by history.

Incidentally, political history has also disproved Evola’s predictions about the triumph of Soviets as the fourth caste. Evolaism required a revision. The theoretical basis of such a revision was put forward in my speech at the academic conference in Rome devoted to the twentieth anniversary of Evola’s death. Today, it has become an integral part of traditionalist research (my theses “Evola: A View From The Left” is quoted in new Italian reissues of Evola, in professor Giorgio Galli’s works, and is focused on in discussions in many traditionalist circles). I expanded on this theme in my article “Julius Evola E Tradizionalismo Russo,” which is available in French and Italian versions.

Thus, the name Lenin has changed its meaning. I think that simply history has occurred in such a way that this new meaning has appeared all by itself. It is indicative that even such a fierce hyper-reactionary and anticommunist as Geidar Jemal has recently devoted some heartfelt lines to Lenin.

The mutation of the metaphysical quality of Vladimir Lenin is an objective fact. When his skull ceased to be sucked at, as some profitable candy, by dirty crowds who have gone (at last) into the sewerage expanses of “liberal reforms,” the features of a continental Titan began to appear on the horizon of the secret line of things.

A Titan who lost his way, a strange Titan possessed by a great force, Starke von Oben, a magic Eurasian dwarf who declared an unthinkable, impossible jihad on the web of global percentage, the world of exploiters of financial entropy and oppressive vice, and… and… triumphantly won the great fight.

Lenin smashed the brain of the philistine, razed to the ground the stock exchange and banks, completely exterminated the persistent pre-revolutionary worms (the Gusinskis and Berezovskis of the time), turned upside down the stratified, alienated Later Romanov Russia built on Old-Believers’ corpses, pawned and re-pawned to European nonentities, etc.

Lenin mobilized the nation for a total upheaval. Yes, it was bloody, but blood is inherent to the birth of all things. Yes, it was allegorical, but the ideological discourse of Tradition has already been for many centuries compelled to disguise itself in dubious formulas of compromise, otherwise the kali-yugical mankind simply would not understand anything, as it has grown dull and bestialized beyond measure.

However, a new perception of Lenin and Leninism is not an easy job. The vulgarity of plain nostalgia or non-reflexive dogmatism would be out of place as much as the hackneyed preaching of anti-Sovietchiks (incidentally, today’s anti-Sovietchiks are the most disgusting of yesterday’s Sovietchiks; it is not accidental that true dissidents and real fighters against the regime never managed to occupy any position of significance in the political hierarchy). New Leninism should be perceived magically, euroasiatically, eschatologically, and geopolitically.

His is a solemn and mournful figure, a subtle maniac, through whom the unrestrained winds of the Continent were blowing. Burring, restless, mobile, cunning, stunned, rapaciously carnal, with half a brain and piercing little eyes, he is more vital and perfect than any athlete or orator, more vivid, lofty, and idealistic than any demagogue of “idealism” or “traditionalism.” In Europe I met many Guenonians and Evolians. Some of them were sloppy schizophrenics, others obedient and politically correct Philistines (many work in banks, while others teach the basics of marketing). They are a bunch of misfits, incapable of original thinking, deeds, terrorist acts, or any effective historical action of the slightest importance. The only thing they do is whine, squabble over some trivia, and grumble at the world around, which they do not understand at all and are pathologically afraid of.

Any halfwit terrorist from the Red Brigades or RAF is a hundred times more attractive then the majority of European “traditionalists.”

Lenin is a tragic and powerful Angel, one of the Angels of Apocalypse, pouring out the dreadful contents of the final goblet on the insane Earth. The angel of the last winds… The angel of blood and pain…

I think that Vladimir Ilyich Lenin was a little Eurasian Avatar. He wanted to stop time and open the cycle of Eternal Recurrence. He was our Lenin. But he is dead. You killed him. You and I.

This article was published in New Dawn 84.
If you appreciate this article, please consider a contribution to help maintain this website.

Translator’s notes: This article was first published in LENIN electronic weekly run by Misha Verbitsky. imperium.lenin.ru/LENIN/. Emmanuel Malynski, the Polish Catholic conspiracy theorist, together with Leon de Poncine, have issued several strong anti-Semitic brochures. Tagut in Arabic. Alexander Yakovlev, the so-called architect of Perestroika, cult figure in Russian liberal circles. The name ‘small shoe’ was given to him because of his lameness. Vladimir Gusinski, notable banker and media tycoon. Boris Berezovski, notable banker, the so-called Usurer of the Family (Yeltsin’s family). Starke von Oben, “the strong one from the skies”, term primarily used by Guido von List. The collective spirit of the perished heroes later embodied in the new generations or certain persons.