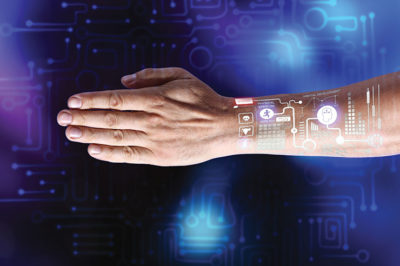 A few years ago, commentators argued that “data is the new oil”:1 a precious commodity that makes the world go ‘round. Instead of wars for control over natural resources, à la Iraq, Libya, and Syria, the new battles will be fought across informational landscapes by tyrannical tech monopolies whose software is based on designs that emerged from the state-funded military sector and whose power is too vast for governments to break.

For-profit transhumanism was the plan all along. Referring to brain implants, the founder and head of what became the World Economic Forum, Klaus Schwab, said in 2016: “first we will implant them in our clothes as ‘wearables’ and then we could imagine that we will implant them in our brains or in our skin.” Schwab said that this will eliminate the boundaries between digital and physical space.2 In 2017, Jun Wang, co-founder of the health company iCarbonX, said: “We want an exact 3-D figure of you: the fat, the muscle – your entire body shape, plus facial recognition, and what’s going on with your skin.”3

Governments’ responses to the Covid pandemic worldwide have given our new biotech overlords the perfect opportunity to roll out and impose a myriad of next-generation gadgets for the control of humanity.

Consider how anti-democratic forces have exploited national health services for profit. Billionaire tech entrepreneur Peter Thiel once wrote: “I no longer believe that freedom and democracy are compatible.”4 In-Q-Tel is a US Central Intelligence Agency seed-funding company whose investments, with others, helped to set up Google and Thiel’s Palantir: an AI and analytics company.5 Palantir was awarded US Defense Department contracts in foreign battlefields, including Afghanistan, to build biometric databases of the world.6

NHSX is a unit of the British National Health Service (NHS) designed to put the final nails in the NHS coffin by digitising patient care. In July 2019, long before the world was aware of the growing pandemic, Palantir UK’s Louis Mosley dined with the chair of NHS England, David Prior. The pair discussed selling NHS data to the US-based firm.7 In 2020, with Covid ripping through Britain, Palantir was awarded a £23 million contract under the secret Crown Commercial Services G-Cloud 11 Framework.8 The NHS later developed its own App for track and trace, which in April 2021 the Transport Secretary, Grant Shapps, said could be used for vaccine travel passports.9

GenVis is an Australian company specialising in surveillance analytics. It describes itself and its products as building and presenting “compelling criminal cases underpinned by video forensics,” “real time intelligence,” and “people management.”10 A snazzy GenVis video promotes Australia’s 500 per cent increase in CCTV over the last decade, adding that 80 per cent of footage is unused due to monitoring costs. GenVis’s “intelligence path mapping” software can rectify this alleged problem by tracking targets and using visuals to make data easy to understand.11 The authorities in both South and Western Australia gave GenVis a contract to monitor Covid patients in quarantine via the G2G Now app, which the police also utilise to enforce travel restrictions.12

Accenture is a company with an Australian presence that provides numerous services, including artificial intelligence, cybersecurity, and data analytics.13 Accenture has also won military consultation contracts and promotes the aerospace sector on its website.14 In March 2021, the Australian government teamed up with numerous companies, including Accenture, to deliver vaccines to the population. Greg Hunt, the Minister for Health and Aged Care, said: “Accenture will provide tracking of vaccine doses as well as enabling overall program implementation monitoring.”15 Vaccine bookings would be managed by HealthEngine: a company that boasts 1.5 million monthly users, most of whom are Australia’s 70,000 GPs and health clinics. But the company had already been fined for unlawfully sharing patient data.16

International Business Machines (IBM) provided Hollerith punch-card systems to Nazi Germany, which the regime used to code and tabulate non-Aryans for slave labour and extermination.17 IBM also made money off the back of the US taxpayer. By the 1950s, for example, the IBM 701 computer was processing 17,000 instructions per second for researchers and the US government.18 The pandemic has given IBM an opportunity to utilise its data-gathering and processing for public health services. The US government contracted IBM to develop a Digital Health Pass. The operation is described as follows: “Pharmacies and labs can issue verifiable credentials – such as test results or Covid-19 vaccine certificates – and send to an individual’s smartphone.”19

According to the New York State, the Excelsior Pass “provides a free, fast and secure way to present digital proof of Covid-19 vaccination or negative test results.”20 The Excelsior Pass is based on IBM’s Digital Health Pass.21 Carbon Health, the Commons Project, the CARIN Alliance, Evernorth, the Mayo Clinic, Microsoft, the MITRE Corporation and many others have spawned a mini vaccine/test passport industry via apps and initiatives like Change Healthcare, FirstVitals, and VaxYes.22

IBM’s systems are built on a new model of data storage that creates new endpoints tied to previous information: blockchain. Blockchain advocates reckon that end-to-end data can fast-track test results and vaccine certificates.23 But blockchain potentially threatens privacy by including in the chain all the informational points about the given person.

For decades, privacy advocates have warned about the incremental steps toward a cashless society in which every transaction by every citizen is not only tracked, recorded, and analysed but marketised in the form of surveillance capitalism. Buying habits form personal profiles of the consumer from which insurance companies, data brokers, and advertisers profit. Blockchain was created specifically for cashless digital money transactions called cryptocurrency.24 Fear of catching Covid has made growing numbers of consumers and shop assistants increasingly reluctant to handle cash, so much so that by November 2020, nearly six in 10 consumers were willing to pay bank fees in order to make non-physical transactions.25

As with data companies, cryptocurrency designers have used Covid as an opportunity to promote their products. “Governments are very interested in the cashless society,” says the Financial Times. In the US, the Federal Reserve has quarantined its cash. The e-commerce-friendly Chinese Community Party, which had already encouraged payment by QR codes, has literally disinfected its money. The Reserve Bank of India has actively encouraged electronic payments.26

Financial technology (fintech) is another sector actively stimulated by governments. FinTech Magazine reports that the kind of biometrics envisaged by the likes of Klaus Schwab originated in the 19th century with the eugenicist Francis Galton. As growing numbers of apps and software on iPhones, iPads and other devices give users the option or indeed require having fingerprint recognition, palm prints, voice recognition, and eye scans, cryptocurrencies go hand-in-hand with biometrics. Set up by the entrepreneur Mihai Draghici, PayByFace, for instance, uses recognition algorithms to enable instant transactions. Similar companies have focused on eye recognition in light of mask mandates that render whole-of-face recognition software useless.27

In America, the Scripps Research Translational Institute “aim[s] to make individualised medicine a reality for everyone. We use the tools of genomics and digital medicine combined with cutting-edge informatics techniques to better understand each individual and ultimately render more effective healthcare.”28 Over the years, the Institute has received money from the US Department of Defense, including grants to build an artificial immune system.29 In August 2020, employees of the San Diego Metropolitan Transit System wore the Institute-produced Fitbit watch designed to identify early Covid symptoms.30

In 2018, Amazon acquired Wholefoods for $13.4 billion. A few months ago, it was reported that in Wholefoods stores in Seattle, customers will be able to wave their palms over biometric payment devices as they previously had at Amazon One stores.31 The news comes at a time when Amazon Prime drivers are quitting over company demands that they consent to yield their biometric data in the form of in-car surveillance that monitors them to authenticate their identity and track their levels of fatigue as they drive.32

In an era of what the US Pentagon calls “full-spectrum dominance,” these separate nodes of technology create a cohesive whole that scans, tracks, and monitors not only every movement and digital transaction but, increasingly, the very intimate and sovereign inner space of the human being. The ancient wisdom that teaches lack of separation between the human and the infinity of god is being replaced with a new philosophical paradigm: the human as a data point in the infinite universe of 0s and 1s, whose gods are the surveillance capitalists and transhumanists, like Jun Wang and, more powerfully, Klaus Schwab and his technofascist ilk.

This article was published in New Dawn 187.
If you appreciate this article, please consider a contribution to help maintain this website.

6. Annie Jacobsen (2021) First Platoon: A Story of Modern War in the Age of Identity Dominance, Dutton.

17. Edwin Black (2001) IBM and the Holocaust: The Strategic Alliance between Nazi Germany and America’s Most Powerful Corporation, Dialog Press.