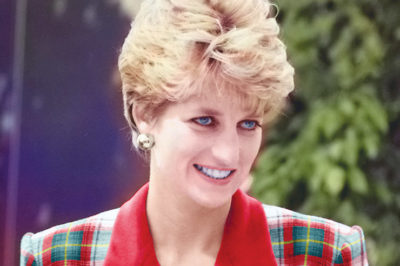 I was introduced to Diana, Princess of Wales, through one of my parishioners at St Mary Abbots Parish Church, Kensington. A personal friend, he was employed by the Royal Family. Diana was technically a parishioner of mine as her London residence, Kensington Palace, was just around the corner from my church, where I had been Curate since my return from being Chaplain of St Nicholas Church, British Embassy, in Ankara, Turkey. ‘Curate’ means a priest entrusted to cure souls. Caring for the spiritual health of his people. I felt that being concerned for Diana’s soul was an integral part of my priestly duties.

Before being formally introduced to the Princess via my friend, I had seen Diana once inside St Mary Abbots. She never came to church on Sunday, or indeed to weekday services like Holy Communion or Even Song, but she would sometimes sneak in at other times and sit at the back of the church in quiet contemplation. It was a rainy afternoon when I noticed her sitting there, her bodyguards discreetly hovering nearby. I did not want to impose on her so I pretended to be reading my prayer book until she actually got up and came towards me. She wore what looked like a kind of tracksuit as if she had just been for a jog. We exchanged a few pleasantries. She asked about my accent. “Italian,” I told her. “You are very tall for an Italian!” she exclaimed. I smilingly agreed. I was bowled over by her. She was so sexy. (Well, a priest is only human!) Her face, especially. I have a feeling for faces. Her eyes, her nose… her nose, particularly. Loved it. Anyway, after a few more polite exchanges she left. Sometime later my parishioner friend let me know the Princess would like to meet me.

That was the beginning of an extraordinary relationship. Diana shared with me that she was in love with Dodi al-Fayed. “I want you to meet him,” she said. That took place at Dodi’s apartment, near Marble Arch. He struck me as a very pleasant, unstuffy fellow. A young Egyptian who could easily have been an Italian. The way the two of them interacted left me in no doubt that they were passionately in love. The amorous sparkle in the Princess’ eyes, the way he held her hand, how she beamed… things like that. She privately questioned me about whether the Church of England permitted marriage between a Christian and a Muslim. I reassured her. As a resident parishioner, she was entitled to be married in the parish church. (“Could you marry us?” she asked.) Had she still been a member of the Royal Family, she would have required permission from the monarch. Of course, she had been cruelly stripped of the title of ‘Princess of Wales’ after her divorce from Prince Charles, so she was no longer a formal member of that gang. Anyhow, I have no doubt that had the two lovers not died in Paris on that terrible Sunday of 31 August 1997, today they would be husband and wife.

I vividly recall hearing the news of the fatal car crash on the BBC while I was shaving and getting ready for church on that morning. Could not believe it. ‘A hoax!’ I first thought. Alas, it was true, all too true. I walked down to St Mary’s for the 9.30 Eucharist Service with a sense of unreality, silently praying for the repose of her soul and Dodi’s. I preached my sermon amidst a great hush. The congregation was still and recollected. The news had already got to them.

The possibility of foul play did not occur to me at the time. My primary concern was praying for the couple’s eternal salvation. Then doubts began to arise. I distrust conspiracy theories, but some of the murky aspects that emerged later troubled me. They still do. Later I got to know Dodi’s father, Mohamed al-Fayed, and I fully appreciated that much was still to be explained. A Chief Superintendent from Scotland Yard visited me. My house was burgled and some papers vanished. Buckingham Palace inquired about me. Some very powerful people didn’t like what I knew about the Princess – that was obvious to me. (I can say no more than that.) However, I would not let anyone intimidate me.

Twenty years have gone by since Diana and Dodi died. “She will not go quietly,” the Princess had said in an interview. Indeed, she hasn’t. She is still with us. She haunts the universal imagination now as much as she did when alive – witness the huge interest in stories and putative revelations about her. The media are full of them. It is like an endless stream. Her unquiet soul, like the ghost in Hamlet, will not go away. That is partly why I decided to publish my book, Princess Diana: Letters from a Soul, available on Amazon Kindle. It was a labour of love but also a duty. I wanted her not to be silenced forever, as her detractors would like, but to go on speaking. To empower her voice to continue being heard. In the first person. From where she is now. The Beyond. More precisely, from a state, a condition – not necessarily a place – called Purgatory. A locus of purification, prior to a soul being allowed to enter into the perfect bliss of Heaven. That is from where Diana speaks to me in her Letters.

While writing I sought spiritual inspiration from Dante, the immortal poet author of the Divine Comedy. I studied him in my school days – all Italian students have to read Dante, he is the father of Italian literature – and I constantly come back to his great work. Apart from the beauty of his verse, I gain all sorts of new insights from Dante. Particularly about the world to come. The figures of Diana and Dodi perhaps could be compared to Paolo and Francesca, two unforgettable doomed lovers in the Comedy. Or, as I suggest in my book, to the pathetic figure of Pia de’ Tolomei, a woman from Siena murdered by her husband. While meditating on lines from Dante’s Comedy I received great encouragement towards completing my book. Another major influence was the great Islamic mystic Muhyiddin Ibn Arabi. A fountainhead of Sufi wisdom. I got to know of him in Turkey where he has a large following amongst mystics, some of whom taught me their spiritual techniques. Ibn Arabi postulated the existence of an intermediate world between this one and the next, called Alam al-Mithal. A supernal dimension where the spirits of the living mingle and dialogue with the souls of the departed.

The third influence on me was Carl Gustav Jung. His idea of the archetypes as well as his own visions. Diana in a way was an embodiment of the ‘eternal feminine’ archetype, I feel. Unlike the materialist Freud, Jung believed in transcendence. His conception of the unconscious was not as negative, as pessimistic as Freud’s. The unconscious must be integrated into the conscious personality, not regarded as a wild beast inside us. I learnt much from Jung. And I am still learning.

Speaking as a Christian and a priest, I don’t think I should apologise for being interested in the next world. Christ talked and made promises about it. The Church affirms her belief in the world beyond the grave in the Creeds and prays regularly for the dead. Why is it wrong in having an interest in what goes on in the invisible world? We should not leave that only to spiritualist and Gnostic sects. It is part of Christian doctrine. Moreover, when confronted with the fearful climate of secularisation, atheism and indifference which obtain in the West, I regard it as imperative for a priest to draw attention to eternity, to the values of transcendence and their implications for the life of man.

The Anglican Church often gets caricatured as consisting either of wishy-washy liberals or evangelical fundamentalists. Both kinds certainly exist, but there are also serious-minded and devout persons who cling to the historical teachings of the Book of Common Prayer. A crisp and compact text filled with wisdom, still offering valuable guidance and spiritual and moral orientation to priests and laity alike. When at theological college near Oxford, I was impressed by the writings of Alan Watts, an Englishman who was ordained as an episcopal priest in the States and composed a book urging that Christianity should become mystical. Watts also wrote about Zen and that was another influence on me.

When I was writing my book I dreamt of the Princess three times. Gloriously transfigured, yet as adorable as ever. Like an angel. She spoke about William and Harry. Asked for some corrections to be made in what I was writing. She told me to keep praying for her. Every day. “You have no idea how much it helps,” she said. She also expressed concern about an aspect of my life but that I cannot go into here. Once or twice she seems to be in some discomfort. That saddened me, but I recalled that the flames of purgatory are a necessity. No purification, no salvation.

As a young man in Italy, I was for some years a close disciple of the traditionalist guru and writer Julius Evola. A man of tremendous depth and esoteric knowledge about whom I have written another e-book, Julius Evola: The Sufi of Rome. (Although an Anglophobe, Evola took a special interest in the mystery of Stonehenge and much regretted not having seen it.) He knew all about Italian and international shadowy intelligence operations and repeatedly warned me about them, because the far right, then as well as today, crawled with police spies and agent provocateurs. He himself had been the object of many attacks by sinister forces, visible and invisible. What would Evola say about Diana and the circumstances of her death? Although a believer in occult warfare, Evola was the very opposite of credulous. Despite what some people might think, his frame of mind could be critical and sceptical. I see him sitting in his wheelchair, smiling sardonically at me and cautioning: “Vedremo, caro Franco, vedremo.” We shall see, dear Franco, we shall see.

To conclude, where is Princess Diana now? She certainly has not perished. I like to imagine that, had I been by her in Paris where she died twenty years ago, I would have beheld her before closing her eyes to this mortal life, turning her lovely face confidently to that inexhaustible force and grace that Dante in the Paradiso calls “l’eterna fontana.”

is available on Amazon Kindle.

This article was published in New Dawn Special Issue Vol 11 No 6.
If you appreciate this article, please consider a contribution to help maintain this website.