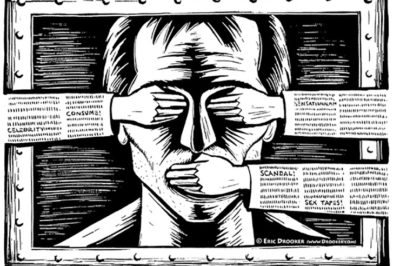 As with all totalitarian regimes, the black/white or the good/bad Baby Bush “You’re either with us or you’re with the Terrorists” – binary rhetoric lies at the heart of the Global Power Elite’s PsyWar technology.

In 2004, Denis Boneau, a French journalist writing for the Voltaire Network, published an article called “The Science of World Domination”  (www.voltairenet.org/The-Science-of-World-Domination), making an excellent summary of key milestones in the development of the United States’ post-World War II Global Psychological Warfare Strategy.

He starts by describing the Truman Doctrine of “Containment” of the former Soviet Union that was based on the so-called “long telegram” sent to the State Department in 1946 by an advisor in the US embassy in Moscow – and key Council on Foreign Relations (CFR) scholar – George S. Kennan.

Shortly afterwards, Kennan was called back to the US to brief his superiors more fully and his recommendations were finally published in the July 1947 issue of Foreign Affairs, the official journal of the CFR, as “The Sources of Soviet Conduct.” This became known as the “X” article because that’s how Kennan signed it, as there was still heated debated as to whether it would become official US foreign policy.

It did. With his highly influential article, Kennan gave birth to the US policy of “Containment” of the Soviet Union which consisted in blocking the expansion of communism through the control of national emancipationist movements that could lead to greater power to pro-socialist or nationalist leaders.

As official policy, “Containment” required the collaboration of experts capable of providing geographical, economic, cultural, psychological and sociological data useful to the US Armed Forces and the intelligence community, working very closely with key think tanks like the CFR.

Thus began the Cold War which Kennan and the US Government believed would give the United States a historic opportunity to assume leadership over what they would eventually describe as the “Free World.” With time, as the Global Power Elite became more deeply embedded inside the US and British public and private power structures (and that of their key allies), that “leadership” would end up encompassing practically the whole planet.

What is Psychological Warfare?

Boneau defines Psychological Warfare (PsyWar) as a number of actions ranging from radio propaganda to torture, that require comprehensive information on targeted populations. In a document written in 1948, American ground forces defined “psychological warfare” as follows:

“It is based on moral and physical means different from those upon which orthodox military techniques are based on. Its purpose is: (a) To destroy the will and the fighting spirit of the enemy and avoid its allies’ support and, (b) To encourage our troops and our allies’ will of being victorious.”

PsyWar uses every possible weapon and tool to influence and impact the will of the enemy. Such “weapons” are labelled “psychological” because of their effect and not because of their own nature. This is the reason why, open propaganda (“white”), secret (“black”) or “grey” propaganda – subversion, sabotage, murders, special operations, guerrilla, espionage, political, economic and racial and ethnic pressures – are all considered useful PsyWar weapons.

To implement such programs, the intelligence services recruited specialists on behavioural sciences capable of inventing the “simple, clear and repetitive” white propaganda and black propaganda aimed at provoking “disorder, confusion and… terror” within the enemy forces.

We thus begin to fathom that the so-called “Arab Spring” of today did not just suddenly and spontaneously explode in 2011, but was rather hatched from an “egg” laid decades ago and brooded by the secret intelligence agencies.

This began in the 40’s and 50’s with Project Troy that mobilised top scholars to identify available means of transmitting the “truth” (i.e., US propaganda) behind the Iron Curtain through powerful radio transmitters like the Voice of America, the broadcasting network created by the International Information Service (IIS), another PsyWar institution created under the Truman Administration.

Voice of America was used to promote US “values” of so-called “democracy,” the “American Way of Life,” “freedom” and Corporate Capitalism. A key leader of Project Troy was James Webb, adviser to Secretary of State Dean Acheson and a “psychological warfare” operative who recommended university experts and the government to work closer.

They soon realised, however, that Voice of America was not enough to penetrate the Iron Curtain and supported by the US Navy and the CIA, they suggested other channels to implement “white” propaganda: university exchanges, publications of books, information through the mail, professional journals, commerce and industrial publications.

This worked so well that in 1950 the US Air Force commissioned and funded similar research on the Korean population. Wilbur Schramm, the founding father of the mass communication paradigm, John Ridley and Fredericks Williams were given the mission of interviewing anti-communist refugees to draw up a suitable propaganda strategy on Korea. The study also resulted in the establishment of the “Public Opinion Quarterly” (POQ), the official magazine of “psychological warfare” community.

In the 1963 Project Camelot was created that defined process models leading to national revolutions in Third World countries to facilitate counter-insurgence operations. Camelot is a good example of the strengthening ties between behavioural scholars and the US Intelligence community (i.e., intel services, universities, major corporations, think-tanks and the Military). It facilitated interventions in Yemen, Cuba and the Congo, and helped foresee and prevent the risk of revolution.

Psychological Warfare Strategy development also counted on key universities dealing in Communication Sciences to develop the “mass communication” paradigm financed by the US Military, the CIA and the State Department. This led to effective propaganda used to penetrate the Iron Curtain through different means, including leaflets and broadcasting. The discipline’s field of study was wide: persuasion techniques, opinion polls, interviews, military and political mobilisations, ideological dissemination…

They have now come a long way thanks to dramatic breakthroughs in communications and information technologies, where propaganda and PsyWar have to a great extent been outsourced and privatised. Today, their main PsyWar weapons include TV, radio, press and internet outlets such as Fox, CNN, MSNBC, ABC, CBS, PBS, New York Times, Newsweek, BBC, RTVE, RAI, Time, Daily Telegraph, Sun, Mirror, Daily News, Reuters, Jerusalem Post and their global subsidiaries and dependants.

Most importantly, this process also encompasses that key arm of social engineering and thought deformation known as the “entertainment industry” with Hollywood as its main hub and flagship.

From the very beginning, torture was considered a research field in social sciences. During the Korean War, the BSSR (main “black” propaganda research centre) was charged with carrying out studies for the Army to identify Eastern Europe population’s “vulnerability targets and factors” while defining different “aspects of psychological violence.” BSSR reported on the effects of traditional interrogation techniques – electric shocks, blows, drugs – all funded in part by the CIA, especially on the populations of Viet Nam and Africa, geared at improving torture effectiveness.

The paradigm of mass communication was inserted in a broader intellectual plan consisting in the division of the world map based on the American strategists’ logic. The patriarch of this discipline, Wilbur Schramm (as did Leo Strauss), offered a perspective of this reductionist dimension of communication sciences based on the “good guys/bad guys” antagonism, where communism symbolised “Evil” and America symbolised “Good.” This was shared by the majority of the intellectuals and scientists supporting the US government in its fight against Soviet expansionism where neutrality was considered treason.

In 2001, the Bush Administration reactivated these Cold War mechanisms, not to fight the Soviet Union but to impose a “New World Order.” Since 11 September 2001, the excuse for this reactivation is “The War on Terror.” Once again the intelligence community turned to universities: the CIA’s director of scientific research, John Philips, took control of the Rochester Institute of Technology; Michael Crawl, deputy director of the CIA’s joint economic association in the computer sector was appointed dean of the University of Arizona, and Robert Gates (former CIA director under Bush Senior) before becoming Bush/Obama’s Pentagon Chief was president of Texas A&M University.

Alas! Nothing new under the sun…

This article was published in New Dawn 131.
If you appreciate this article, please consider a contribution to help maintain this website.