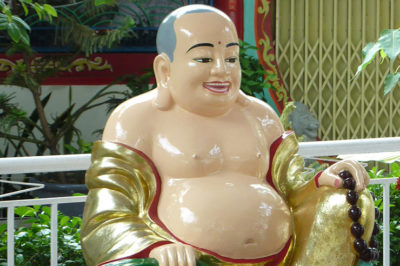 The Vietnamese Buddha I have a great reverence for is Di Lac Phat, the Maitreya Buddha, the fat, laughing Buddha of the future. It is impossible to gaze upon his form for even a moment and not feel slightly amused, slightly more hopeful. Di Lac represents hope for the future, the wealth and abundance of which is represented in his bodily form. As such, he is a worthy symbol for the new Vietnam, a forward thinking, vastly energetic nation with a huge population and a great thirst for renovation and renewal. As depicted in Vietnam, Di Lac Phat is always smiling and often carries a mysterious sack which most say is filled with gold. The Maitreya hasn’t arrived yet, but his day is just around the corner.

The spirit realm is ever-present in Vietnam, in homes, businesses, temples and busy intersections. On street corners, even in sophisticated downtown Ho Chi Minh City (old Saigon), you can come across small shrines dedicated to the wandering ghosts and the spirits of place. These shrines are actively tended by people in the community who offer fruit and incense every day. They speak to an ancient animist tradition that still holds great sway in Vietnam.

Streets and suburbs are possessed of their own protective spirits, but even more so are mountains, old trees and waterfalls. There is a shrine atop Nui Ba Den, the Black Lady Mountain that rises up out of the plains of Tay Ninh that stretch from Ho Chi Minh City to Cambodia. It is a place of immense mystical significance, said to house a Black Goddess whose power is so great that all around the mountain is a mystically obsessed Holy Land that was and is something of a spiritual powerhouse in Vietnam.

The Black Lady Mountain dominates the landscape in Tay Ninh City, about two hours drive from Ho Chi Minh City. Perhaps it is no accident that from this extraordinary place emerged the Cao Dai religion, Vietnam’s greatest indigenous religious experiment and one that has fascinated authors and observers ever since it first emerged in the 1930s.

Cao Dai means High Tower, which is one of their names for God. This extravagantly colourful, hierarchically structured religion was founded by a group of men experimenting with automatic writing. It has always captured the imaginations of visitors, and Graham Greene wrote about it in his book about Vietnam, The Quiet American. The Cao Dai Holy See at Tay Ninh sits in the shadows of Nui Ba Den, and the population of this city of over one million people is almost exclusively of that religion.

The Cao Dai faith reveres all religions and hopes that one day humanity will be united. Their shrines feature a central image of a single eye, which represents the all-seeing eye of a universal God. Followers of Cao Dai are strict vegetarians, and the Cao Dai elder priests wear brilliantly coloured robes that signify the branch in which they are reincarnated – Buddhist, Taoist or Confucian. The Cao Dai religious structure is based on the Catholic Church, with popes, cardinals, a holy city and saints – some of their saints include Victor Hugo, Sun Yat Sen, the Virgin Mary and Kuan Yin. There is only one God in Cao Dai, and he/she overlooks all people, regardless of what religion they profess. Their scriptures say: “we all know there is something over our heads.”

But, of course, Buddhism is the principal religion of Vietnam, and is represented in a surprising number of varieties. The Buddhist nuns and monks of Vietnam are a huge unpaid workforce that is the spiritual powerhouse of the nation. Almost alone they represent the only social welfare structures that exist in the country. They care for the orphaned, the sick, the elderly and the disabled, and temples operate as community welfare and meeting centres.

Vietnamese Buddhism, noteworthy for its laid-back character, has become something of a successful religious export. The second-most-famous Buddhist in the world is Vietnamese Zen Master Thich Nhat Hanh, and he has established monasteries and meditation groups across the Western world. He has also written numerous best-sellers and has appeared on Oprah.

There is, too, a very old reverence for Confucius and the Confucian tradition in Vietnam. The Temple of Literature in Hanoi – constructed in 1070 – was an early Confucian University. It is evidence of the Vietnamese reverence for learning, and the grounds of the temple feature carved stone turtles with steles on their backs recording the names of graduates from 1484–1788. These were recently declared special objects of protection by UNESCO.

Kuan Yin, the Buddhist Goddess of Mercy, or Bodhisattva of Compassion, is one of the most popularly revered religious figures in Vietnam. Indeed, her images are so ubiquitous that she might seem to be the great patron saint and protector of the Vietnamese people. Her name (Quan The Am in Vietnamese) means “The Hearer of All the World’s Cries.”

Shrines to her are to be found everywhere, in people’s houses, on streetsides and, of course, at temples. She embodies the qualities of compassion and unconditional love. Vietnam’s culture has a great reverence for the mother, and people indulge in a great deal of devotion directed toward this Divine Mother – one of her appellations is Me Hien, the Gentle Mother.

Interestingly, for Vietnamese Catholics (a sizeable minority, particularly in the South), there is another Vietnamese mother who is greatly revered. This is Our Lady of La Vang, an apparition of the Blessed Virgin Mary that appeared to the Vietnamese Catholic faithful during a period of religious repression during the 18th century. Her beautiful form – representing the Madonna and Child as entirely Vietnamese, in traditional dress and often rendered in white marble or plaster, just like Kuan Yin – is to be seen all over Vietnam.

Image credits: Di Lac Phat, Kuan Yin & Our Lady of La Vang by Walter Mason; Cao Dai altar Franzfoto
This article was published in New Dawn 148.
If you appreciate this article, please consider a contribution to help maintain this website.