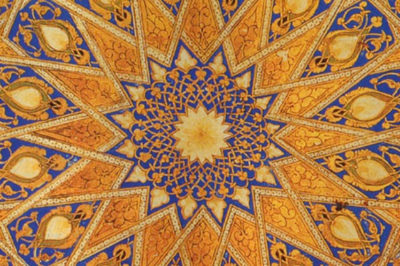 The French diplomat Louis Jacolliot (1837 – 1890) first alerted the West to the legend of the Nine Unknowns. Jacolliot claimed these unknown adepts were still alive and that he was in touch with them. But another French mystic, Saint-Ives d’Alvedre (1824 – 1909), claimed that the legend was far older. He said that the Nine Unknowns were beings from the star Sirius who came originally to the Tarim Basin in Central Asia in 34,000 BCE and there established their Shambhalic headquarters. Their sojourn in Atlantis came much later.

Sufis attribute great mystical significance to their tradition of the Nine Unknown Masters as it is expressed in the No-Koonja, the nine-pointed Sufi diagram also known as the Naqsh or Seal. They say that this metaphysical glyph “reaches for the innermost secrets of man”; and the Sufi writer Ernest Scott in his classic The People of the Secret implies that it stands for one of the highest and most authoritative echelons in the Sufi hierarchy.

In Indonesia, which covers all the islands of the Sunda Strait, Sufic Islam has dominated the culture since the fourteenth century CE. For seven centuries – that is, until the twentieth century and the rise of Modernist Islam – the dominant religion has been a syncretic blend of Sufic Islam, Hindu-Buddhism, Tao and animism, with an increasing infusion of Christian and Theosophical elements. The Indonesians are a deeply spiritual people, and in the largest island, that of Java, the Nine Unknowns are a household word, an integral part of the rich mythological fare that sustains the whole society.

A story circulates widely in Javanese esoteric schools that in the early part of the twentieth century the circle of Nine Unknown Sages met in Java to bring a new spiritual practice into the world. For this purpose they formed a closed meditative circuit that generated powerful cosmic energies. They knew that humanity was on the threshold of a higher stage in consciousness involving the awakening of the Spiritual Soul, an organ still relatively dormant in most people on earth today; and the Nine elected to become a spearhead into that future.

There are three soul centres – animal, human and spiritual – in each individual, with the last-named, the Spiritual Soul, under the governance and direction of the divine Will. When awakened in the course of evolution, the Spiritual Soul profoundly energises and unifies the various lower instruments that normally compete and jostle within human consciousness. The animal and human souls then come under its dominance, and the union of the three under divine Command immeasurably elevates and spiritualises the individual’s state of being. To aid in this evolutionary process the Nine Masters sought to lay down a path capable of stimulating in men and women a greater consciousness and control of the love/wisdom powers of the Spiritual Soul.

The result of the Nine’s meditations was that one night a brilliant beam of light descended from the sky onto a young Javanese Muslim called Muhammad Subuh who was returning home from a Sufi Nachshbandi meeting. The beam of light “programmed” him, thus opening the way to a spiritual revelation. This seed-revelation developed into a new practice and teaching called Subud that would presently be taken to the West.

One of the Javanese sects that indirectly emerged as a result of this event was Sumarah, “the Way of Surrender” – surrender being the essential meaning of the word Islam. Sumarah has become a large-scale movement in Indonesia. It teaches that all the world religions have their roots in the same esoteric source. The same truth underlies them all. All have germinated from a divine seed that lies deep in the Soul of humanity and share equally in its grace. Sumarah’s method therefore calls for universal peace between religions. It raises consciousness from the ordinary mind, whose dualistic and divisive nature breeds images of evil, warfare and religious conflict, to an intuitive state beyond divisions. In that unified state the enlightened mind pursues visions of inwardness, of oneness, of spiritual redemption, of a peaceful coexistence of the family of religions.

Excerpted from ‘Sufism and The Nine Unknowns’ by Victoria LePage, vlepage.newteam.org.

This article was published in New Dawn Special Issue 10.
If you appreciate this article, please consider a contribution to help maintain this website.