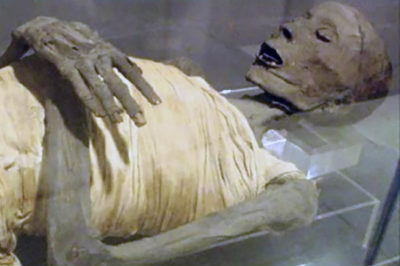 In the movie, Contact, Jodie Foster plays an astronomer who establishes communication with a civilisation beyond our solar system. In the television program, The Curse of the Cocaine Mummies, a different, but equally fascinating, contact is established between ancient Egypt and ancient Peru. A German forensic scientist busted the Egyptian mummy Ramses II for possession of cocaine. Cocaine, as most people know, grows only in the Andes. How did Ramses II get his dope?

The idea of ancient transoceanic contact between the Old and New Worlds before Columbus (other than the Vikings) is simply not acceptable within the tightly controlled halls of academia. Professor John Baines, an Egyptologist at Oxford is a typical case. He calls the idea of ancient transoceanic trade “absurd” and bolsters his “argument” by noting that he doesn’t know any professional Egyptologists, anthropologists or archaeologists who are “seriously” researching the idea. This is because, he says, the idea is not “perceived” to have “any real meaning for the subjects.”

Professor Baines’ view reminds us of the priests who refused to look through Galileo’s telescope to see the blemishes on the Moon because this revelation did not conform to their preconceived ideas of reality. Academia is geared to not looking at the problem. This ostrich approach has predictable results: results that do not necessarily have any bearing upon the quest for truth and in fact, impede the search.

The simple fact that we find sun-worshiping civilisations building pyramids, obelisks and preserving their dead by wrapping them in cloth (mummies) on both sides of the Atlantic is rarely even discussed within the archaeological and anthropological journals despite the fact that every child when first confronted with the facts raises the obvious question “why?” For four hundred of the past five hundred years scholars have puzzled over the facts. Three theories emerged yet only one survives today.

Cortes’s secretary was one of the first to put forward the idea that both Old and New Worlds were remnants of an even older “lost” civilisation. The “Aztlan” of ancient Mexico and the “Atlantis” of ancient Egypt, he argued, were one and the same. With this simple idea the commonalities between buildings, culture and mythologies of the ancient people of Mexico, Peru and Egypt could all be explained as “echoes” of a lost world.

The second theory presented was the idea that Mexico and Peru were settled by people from the Old World who already possessed the skills needed to build pyramids and preserve bodies. Most argued that they came from ancient Egypt but others suggest the Sumerians, people of ancient India, the Phoenicians and even the Templars from France. Again, a simple idea was used to explain an obvious problem.

The third theory, was the idea of “separate development.” Here the focus is upon “how” people arrived in the Americas rather than upon the impressions of the Europeans following Columbus’ “discovery” of the New World. Although this is the more complicated of the theories — thus violating the scientific principle of Occum’s Razor (so beautifully articulated in Contact) that when confronted by conflicting theories for an unexplained phenomena one should prefer the simpler explanation, it is, nevertheless, the only theory that is considered scholarly in today’s universities.

It is within this context that we must watch The Curse of the Cocaine Mummies. Cocaine and tobacco are plants that originated in America and were unknown to the Old World if we are to believe the traditional paradigm. The first tear in the fabric of the dogma came on the 16th of September 1976 when the mummified remains of Ramses II arrived at the Museum of Mankind in Paris. To repair the damage to the mummy, a scientific team was assembled which included Dr. Michelle Lescot of the Natural History Museum (Paris). She received fragments from the bandages and found a plant fragment ensnared within the fibres. When she looked at it under a microscope she was amazed to discover that the plant was tobacco. Fearing that she had made some mistake she repeated her tests again and again with the same result every time: a New World plant had been found on an Old World mummy. The results, little known in North America, caused a sensation in Europe.

Professor Nasri Isk-ander, the Chief Curator at the Cairo Museum thought he had an explanation. As an avid pipe smoker he argued that “maybe a piece of tobacco dropped by haphazard” from the pipe of some forgotten archaeologist. Dr. Lescot responded to this charge of “contamination” by carefully extracting new samples from Ramses II’s abdomen, all the while having others photograph the process. These samples which could not possibly be “droppings” were then tested and once again were established to be tobacco.

The discovery of tobacco fragments in the mummified body of Ramses II should have had a profound influence upon our whole understanding of the relationship between ancient Egypt and America but this piece of evidence was simply ignored. Then, sixteen years later, again quite by accident, more evidence emerged. In 1992, toxicologist, Dr. Svetla Balabanova of the Institute of Forensic Medicine in Ulm (Germany) tested the ancient Egyptian mummified remains of Henut-Tawy, Lady of the Two Lands. The results came as a “shock” to this scientist who regularly used the identical testing methods to convict people of drug consumption. She had not expected to find nicotine and cocaine in an ancient Egyptian mummy. She repeated the tests and sent out fresh samples to three other labs. When the results came back positive she published a paper with two other scientists. (Balabanova, S., F. Parsche and W. Pirsig, “First Identification of Drugs in Egyptian Mummies”, Naturwissenschaften 79, 358 (1992) Springer-Verlag 1992.)

If Balabanova was surprised by the results of her tests she was even more surprised at the vitriolic response to her publication. She received a flood of letters threatening, insulting and accusing her of fraud. When she reminded her critics that she was simply applying the very same techniques that she had used for years in police work where her results were considered “proof positive” her critics didn’t seem to care. She was condemned as a “fraud.”

Dr. Rosalie David, Keeper of Egyptology, Manchester Museum took up the challenge of investigating the “cocaine mummies” which she thought “seemed quite impossible.” She began by sending tissue and hair samples from her museum out to labs. She was working on the dual assumption that one of two things are true: 1. Balabanova’s tests were compromised; or 2. The mummy was not truly ancient” (i.e. it was fake). Dr. David flew to Munich to review the techniques and excavation records to see if the body, which had originally been purchased by King Ludwig I of Bavaria was genuine or not.

Dr. Alfred Grimm, the Curator of The Egyptian Museum in Munich said that “the Munich mummies are real Egyptian mummies. No fakes. No modern mummies. They came from ancient Egypt.” After spending days pouring over the docum-entation associated with the “cocaine mummy” Dr. David relented saying: “it seems evident that they are probably genuine…”

When she returned to Manchester she discovered that her own Museum’s mummies had traces of tobacco. Dr. David said: “I’m really very surprised at this.”

Dr. Balabanova’s work had been validated by the test results from Manchester but she was now hooked on the problem and began collecting samples of naturally preserved bodies housed in museums all around Europe. She obtained 134 separate bodies taken from ancient Sudan dating to a time long before Columbus or the Vikings. One third of these bodies contained both nicotine and cocaine.

The exciting realisation that there was certainly contact between ancient Peru and ancient Egypt has now been established. The cocaine mummies from Egypt and Sudan have changed the rules of this controversial game. There is no longer a warrant to exclude the hypothesis of transoceanic trade in ancient times.

Is the principle of Occum’s Razor only to be applied when the outcome is safely assured to confirm to traditional dogma about theories of the past? It appears so. The cocaine mummies jumped the tracks of long established views. Despite overwhelming evidence we still find ourselves in the last decade of the twentieth century dealing with a ‘scientific’ establishment that ridicules its own members and refuses to look at the results of its own principles if the results don’t confirm the favourite views of the reigning orthodoxy.

One step forward. Two back.


This article was published in New Dawn 47.
If you appreciate this article, please consider a contribution to help maintain this website.