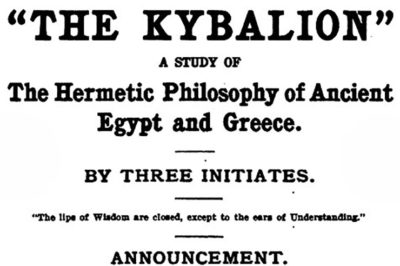 People who have spent time grazing in metaphysical bookshops may have come across a mysterious volume called The Kybalion, written by “Three Initiates” and first issued by the Yogi Publication Society of Chicago in 1908.

The most familiar edition is a plain volume bound in blue cloth and stamped with gold, in a format like those of other books from the same publisher, including various works on yoga by one Swami Ramacharaka.

The Kybalion claims to be a brief introduction to a mystical tradition that has survived from antiquity. The core of the work is a series of aphorisms that, the authors contend, go back to the “early days” and were “passed on from teacher to student,…the exact signification and meaning of the terms having been lost for several centuries.”

The word, taken at face value, looks vaguely Greek, but it has no meaning in this language (the closest Greek word to it, curiously, is kybeia, meaning “dice game” or “trickery”). It is also tempting to connect this work with the Jewish mystical tradition known as the Kabbalah, but as a matter of fact the Kabbalah is never mentioned in The Kybalion.

The Kybalion is organised according to seven basic principles, which, it says, form the basis of occult philosophy:

1. Mentalism. “The All is Mind; the Universe is mental.”

2. Correspondence. “As above, so below; as below, so above.”

5. Rhythm. “Everything flows, out and in; everything has its tides; all things rise and fall.”

6. Cause and Effect. “Every Cause has its Effect; every Effect has its Cause; everything happens according to Law.”

7. Gender. “Gender is in everything; everything has its Masculine and Feminine Principles; Gender manifests on all planes.”

The origins of this book are difficult to trace. As I noted in the accompanying article, “The Secret Science of Mind,” it is believed to have been written by William Walker Atkinson, who operated the Yogi Publication Society in Chicago (he is generally acknowledged to be “Swami Ramacharaka”).

As the first principle – “Mentalism” – suggests, the ideas of The Kybalion bear some resemblance to New Thought, a movement to which Atkinson was closely connected.

The universe, The Kybalion tells us, is contained in “the Mind of the All”: “The All creates the Universe mentally, in a manner akin to the process whereby Man creates Mental Images.” This idea is central to practically all New Thought teachings.

Nevertheless, the book does echo a more remote past. The term “The All,” for example, resembles the Greek to pan – which also means “the all” and which appears in some Hermetic maxims, most famously Hen to pan: “All is one.”

Given the claims made for it, the most obvious source to examine for the roots of The Kybalion is the Corpus Hermeticum or “Hermetic body” of texts. These were composed in the early centuries CE and purport to expound the wisdom of Egypt as narrated in a series of discourses and dialogues including Hermes and his son Tat (a version of “Thoth”). And indeed there are intriguing resemblances between these works and The Kybalion.

The first text of the Corpus Hermeticum, the Poimandres (whose name is probably a Greek adaptation of the Egyptian p-eime-n-re or “mind of authority”), tells us that the source of the universe was nous – consciousness or mind – much as The Kybalion asserts the principle of “Mentalism.” Moreover, this divine mind is described as “being androgyne and existing as light and life” – which parallels the concept of “Gender” as set out in The Kybalion.

The Kybalion also speaks of the principle of correspondence. This idea appears in another ancient Hermetic text: the extremely brief and elliptical Emerald Tablet, which says, “Quod est superius est sicut quod est inferius, et quod est inferius est sicut quod est superius, ad perpetranda miracula rei unius”: “What is above is like what is below, and what is below is like what is above, to enact the wonders of the one thing.” (The Emerald Tablet is said to have originally been written in Syriac, a Semitic language spoken in antiquity in the eastern Mediterranean world, but it survives only in somewhat dissimilar translations in Latin and Arabic.)

Whether there really was a collection of aphorisms known as The Kybalion that was passed down from master to pupil from ancient times is hard to say. There are, to my knowledge, no copies of it in any form that predate the 1908 edition, but that does not mean there were none.

And there are claims of similarly hidden texts in other traditions. The Russian esotericist Boris Mouravieff claimed that esoteric Christianity has an unpublished set of aphorisms called The Golden Book, some of which he quotes in his three-volume work Gnosis: Study and Commentaries on the Esoteric Tradition of Eastern Orthodoxy (although these do not resemble the maxims of The Kybalion to any great degree).

In a blog posting, Tarot scholar Mary K. Greer suggests a plausible direct source for The Kybalion. In 1884, Anna Kingsford, an Englishwoman who founded an organisation called the Hermetic Society, published a book entitled The Virgin of the World of Hermes Trismegistus, which presents an adaptation of the Hermetic texts. As Greer points out, the introduction to this book bears a strong similarity to many of the ideas in The Kybalion. And in fact the introduction to The Virgin of the World, written by Kingsford’s associate Edward Maitland, does contain a number of things that are echoed in The Kybalion.

For example, Maitland asserts that consciousness is “the indispensable condition of existence,” and that matter “is a mode of consciousness,” which certainly resonates with The Kybalion’s doctrine of mentalism. Maitland also mentions “the law of correspondence between all planes, or spheres, of existence.” He also speaks of “the doctrine of Karma,” which dictates “the impossibility either of getting good by doing evil, or of escaping the penalty of the latter” – an obvious parallel to The Kybalion’s “law of cause and effect.” In light of these resemblances and The Kybalion’s insistence that it contains the essence of Hermetic teaching, it is very likely that Kingsford and Maitland’s work was at least one of The Kybalion’s sources.

Thus it is possible to trace out a lineage for The Kybalion: the original Hermetic texts, which have been known in the Western world since the fifteenth century and which have existed in English versions since at least the seventeenth; and the digest of these texts as presented by Kingsford and Maitland in Victorian London.

But there is a major difference between the original Hermetic teachings and the New Thought–flavoured doctrines of The Kybalion. The Corpus Hermeticum did not exist in a philosophical vacuum; its elevated and abstruse dialogues form only a part of the ancient Hermetic literature. Much of the rest consists of magical texts, and scholars have become increasingly aware that these cannot be so easily divorced in content or inspiration from the Hermetic writings.

What does this mean in short? It means that the ancient Hermetists probably did not use a type of New Thought-like mind power in their practice. Rather they probably made use of such things as magical rituals, divination, and invocations of the gods, just as we see in most ancient religions. The use of mind power as we find it in New Thought seems to be very much an innovation of the nineteenth century.

Hence the aphorisms in The Kybalion are very likely a pious fraud. Certainly their style and mode of thought are more evocative of twentieth-century America than of ancient Egypt or Greece. Even so, it would be mistaken to conclude that this work is unfaithful to the tradition it invokes. A spiritual tradition is based, certainly, on timeless and unchanging truths; but the application to which these truths are put will vary from age to age, in accordance with that age’s need. In this sense, The Kybalion can lay genuine claim to the Hermetic heritage.

This article was published in New Dawn 124.
If you appreciate this article, please consider a contribution to help maintain this website.

Brian P. Copenhaver, Hermetica: The Greek Corpus Hermeticum and the Latin Asclepius in a New English Translation with Notes and an Introduction, Cambridge: Cambridge University Press, 1992.