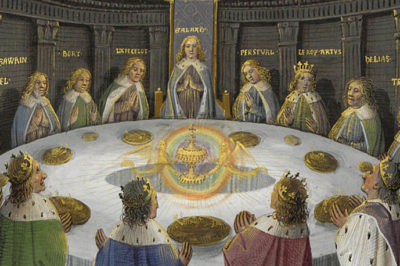 For most of us, the Grail is a mirage or a rainbow’s end. We may catch a glimpse of it, but if we allow ourselves to be led in its direction, we soon find that it recedes; if we steal a few steps closer, it disappears. And so the Grail has become the quintessential metaphor for all that is beautiful but unattainable.

The Grail is usually imagined as a cup or chalice, specifically the cup used by Jesus Christ during the Last Supper (or used to catch his blood as it flowed on the cross). Legend says that after Christ’s death and Resurrection, Joseph of Arimathea – who had lent him his tomb for a few days – took this cup to Glastonbury in Somersetshire, England.

Glastonbury is the site of innumerable legends and fables connected not only with Joseph of Arimathea but with King Arthur and his knights; indeed it was said the bones of Arthur and Guinevere were unearthed there in medieval times. While this may be mere fable, it’s unquestionably true that Glastonbury functioned as the site of an abbey from the seventh century till 1536, when Henry VIII ordered the dissolution of all the monasteries in England. The Gothic ruins of Glastonbury Abbey can still be seen today, and the town remains a popular destination for New Age pilgrims.

The Grail too has become intertwined with the legends of Arthur and his knights; this motif first appears in courtly romances written in the late twelfth and early thirteenth centuries. The oldest is the Perceval of Chrétien de Troyes, a kind of Bildungsroman in which a young man proves himself as a knight. During his adventures, he comes to a castle where he witnesses a strange procession:

A squire entered from a chamber, grasping by the middle a white lance… All present beheld the white lance and the white point, from which a drop of red blood ran down to the squire’s hand…

Then two other squires came in, right handsome, bearing in their hands candelabra of fine gold and niello work, and in each candelabrum were at least ten candles. A damsel came in with these squires, holding between her two hands a grail. She was beautiful, gracious, splendidly garbed, and as she entered with the grail in her hands, there was such a brilliant light that the candles lost their brightness, just as the stars do when the moon or sun rises. After her came a damsel holding a carving platter of silver. The grail which preceded her was of refined gold; and it was set with precious stones of many kinds.

The young man is curious about this strange procession, but, minding his manners, he does not say anything about it. The next morning he awakes to find the castle empty, and he rides off. Only later, when he describes the episode to a maiden he meets, does he discover that he has been the guest of “the rich Fisher King.”

“He is still in such pain that he cannot mount a horse,” the maiden says, “but when he wishes to divert himself, he has himself placed in a boat and goes fishing; therefore he is called the Fisher King.” The maiden also tells the young man that if he had asked the meaning of the Grail procession, he “would have cured the maimed King, so that he would have recovered the use of his limbs and would have ruled his lands and great good would have come of it!”

The Grail here seems to be a familiar object. In fact the word “grail” is derived from the Old French gradale or graal, and often simply means a large serving-dish. Later on a hermit tells Perceval, “The rich Fisher is the son of the King who causes himself to be served with the Grail. But do not think that he takes from it a pike, a lamprey, or a salmon. The holy man sustains and refreshes his life with a single Mass wafer. So sacred a thing is the grail, and he himself is so spiritual, that he needs no more for his sustenance.”

There have been other images for the Grail as well. In the thirteenth-century Parsifal of Wolfram von Eschenbach, the Grail is not a cup but a stone fallen from heaven – the lapsit exillis. This obscure Latin phrase has evoked many explanations. Lapsit is a garbled word, meaningless in Latin, but evoking associations of lapis, “stone,” and lapsus, “fallen.” Exillis resembles exilis, “meager” or “poor,” also exsilium, “exile,” elixir, and even ex illis, “from those.” Most likely it is either a mistake – another instance of the barbarous Latin common in the Middle Ages – or a kind of Joycean portmanteau word, deliberately cryptic and meant to evoke a rich nexus of meanings.

The image of the stone is itself ancient; in describing his version of a Grail Castle, an ancient Greek novelist known as Pseudo-Callisthenes says, “A precious stone, which took the place of a fire, lit the whole temple.”

All of which leaves us asking, what is the Grail? It does not seem to be a mere object, however sacred. For the Swiss psychiatrist C.G. Jung, the Grail was no less than the principium individuationis (“principle of individuation”) that in us which strives to realise itself and become conscious. For R.J. Stewart, a well-known writer on Celtic themes, the Grail is preeminently “the mystery of regeneration.”

To integrate these different perspectives, it may be helpful to recollect that in most of the legends the Grail is the cup Christ used at the Last Supper, and which was later used to catch his blood on the cross. Thus it is a cup that holds blood. This, I think, provides the key to the true meaning of this enigmatic symbol. Each of us has within us a cup that holds blood. It is the heart. The Grail is the heart, illumined and awakened so that it may serve as a receptacle for divine energies.

Few people, in our era or indeed in any era, have their hearts awakened to this extent. This fact helps explain one of the central themes in the Grail mythos: many are called but few are chosen. It would also explain why the few successful candidates are those who are pure of heart, for the heart must be pure before it can be illumined.

That the Grail is a metaphor for the illumined heart also casts light on two other details in the legends. The Grail is sometimes seen as a serving-platter; moreover, in some versions the question the seeker is supposed to ask is, “Whom does it serve?” Once the heart is illumined and awakened, it becomes a vehicle for service. The question then becomes, whom or what does it serve? That the Grail heroes usually forget to ask this question indicates that it does not admit facile or ready-made answers.

While few of us are going to be knights or warriors like the Grail heroes, our emotions, refined and purified by insight and integrity of purpose, can form a chalice into which divine energies can flow. Like the Grail itself, this ideal may seem remote, elusive, and unattainable.

Yet, as the old legends suggest, there is something in the very quest that may serve as its own justification and reward. And once we reach it, we will be asked – or we will ask ourselves – whom or what are we serving?

A version of this article appeared in Gnosis magazine #51.


This article was published in New Dawn Special Issue 2.
If you appreciate this article, please consider a contribution to help maintain this website.