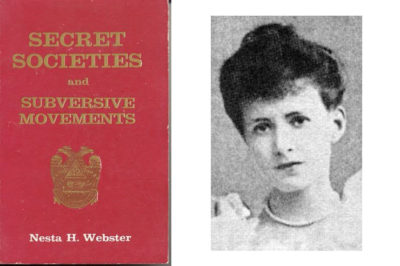 Today the name Illuminati is used in popular conspiracy literature to describe a mysterious hidden elite out to gain power over the whole world. For some writers the Illuminati is synonymous with a shadowy cabal of international bankers and mega-rich ‘Insiders’, while others see the ‘Enlightened Ones’ as the ultimate secret society committed to the enslavement of humanity in a ‘Satanic’ One World government. In the opinion of Tokyo based journalist Benjamin Fulford, former Asian Bureau chief for Forbes magazine, “the Illuminati are really inbred families of European and North American traditional aristocracy and banking families… Their goal is to create a world government.”

In order to understand the origin of much of what is written today about the Illuminati, it is necessary to begin with Adam Weishaupt (1748-1830), a professor of canon law at the University of Ingoltstadt in Bavaria. Together with four of his friends, Weishaupt founded the Order of the Illuminati – that is, the ‘Enlightened Ones’ – on 1 May 1776. Modelling his political secret society on the Catholic Society of Jesus (the Jesuits), he sought to advance the anti-clerical, anti-monarchist, liberal ideals proposed by Voltaire, Diderot, and other French philosophers of the time. “Princes and nations,” he forecast, “will disappear” and then “the human race will become one family and the world the abode of reasonable men.”

Weishaupt tried to infiltrate and control the lodges of Freemasonry in an effort to advance his political agenda. He wrote: “The great strength of our Order lies in its concealment, let it never appear, in any place in its own name, but always covered by another name, and another occupation. None is fitter than the three lower degrees of Freemasonry; the public is accustomed to it, expects little from it, and therefore takes little notice of it.” In March 1785, in response to widespread anxiety in Catholic Bavaria over Weishaupt’s activities, the Bavarian government outlawed the Illuminati. Weishaupt, dismissed from his university post, fled into exile and ordered the Illuminati to go underground.

When four years later, in 1789, the merciless French Revolution broke out, sending shock waves through Christian Europe, conservative writers suggested it was the result of a plot hatched by secret societies, principally the Freemasons. Books and pamphlets began to circulate revealing the Illuminati as the hidden hand behind the Revolution, having transferred its secret operations from Bavaria to France. A leading proponent of this idea was Abbé Augustin Barruel (1741-1820), a French Jesuit Catholic priest who had taken refuge in England.

Barruel believed a widespread conspiracy involving Freemasons – inspired and directed by the Illuminati – was out to destroy Christianity and the European monarchies. Revealingly perhaps, the Jesuit priest Barruel dedicated his four volumes to the “English nation.” Barruel made a clear distinction between the radical Freemasons on the Continent and their Masonic brethren in England, describing the latter as “a society composed of good citizens.” Interestingly, Barruel pointed out how in Britain the Masonic lodges were loyal to the Crown, writing: “Let us admire it [the wisdom of England] for having known how to make a real source of benefit to the State out of those same mysteries which elsewhere conceal a profound conspiracy against the State and religion.”

Inspired by Barruel, the Scottish Freemason John Robison published a book of his own (see accompanying article in this same issue ‘Darkness Over All: John Robison and the Birth of the Illuminati Conspiracy’ by Mike Jay). The revelations by Barruel and Robison on the secret causes of the French Revolution created a sensation. Across Europe their claims were championed enthusiastically by conservative forces locked in battle with republicans. Catholic traditionalist author Joseph de Maistre referred to the Illuminati when he spoke of those “guilty men who dared to plan and even organise in Germany that dreadful, most criminal conspiracy to extinguish Christianity and royalty in Europe.”

In an article in New Dawn Special Issue 11, Dr. Richard B. Spence, a specialist in the history of intelligence agencies, noted “that both Barruel and Robison wrote their books in Britain and that the government of Sir William Pitt the Younger embraced and promoted their ideas. At the very least, Pitt exploited the conspiracy theory to effectively discredit and demonise the French Revolution.”

Following the 1917 Russian Revolution, in which the anti-monarchist, atheistic Bolsheviks forcibly seized power, the English writer Nesta Webster published The French Revolution: A Study in Democracy. In the tradition of Barruel and Robison, she claimed a secret conspiracy had prepared and carried out the French Revolution, concluding that: “The lodges of the German Freemasons and Illuminati were thus the source whence emanated all those anarchic schemes which culminated in the Terror.”

Mrs Webster’s most influential book, however, was Secret Societies and Subversive Movements, in which she set out to document the existence of a vast, centuries old, secret conspiracy to overthrow Christian civilisation. Building on the work of Barruel and Robison, Nesta Webster argued that behind the forces of world revolution “whether Pan-German, Judaic, or Illuminist – beyond that invisible secret circle which perhaps directs them all,” is another force, still more potent, an “Occult Power.”

Webster had a wide and influential readership. H.G. Wells called her Secret Societies and Subversive Movements, “a book that all serious people interested in the British situation ought to read and think about… I believe her [Mrs. Webster’s] influence has spread far beyond the circle of her actual readers.” Winston Churchill praised her in a 1920 article entitled “Zionism versus Bolshevism: A Struggle for the Soul of the Jewish People,” where he wrote of the growth of a “world-wide conspiracy for the overthrow of civilisation and for the reconstitution of society on the basis of arrested development, of envious malevolence, and impossible equality” which “played, as a modern writer, Mrs. Webster, has so ably shown, a definitely recognisable part in the tragedy of the French Revolution.” After reading Webster’s books, the British economic reformer Major C.H. Douglas, father of the Social Credit movement, declared: “Any serious endeavour to identify the origins of world unrest and war inevitably and invariably leads back to what is loosely called occultism.”

It was not long before Nesta Webster’s writings made their way across the Atlantic to North America where they found a ready audience among right-wing Christians. “Without the influence of Nesta Webster,” notes the British historian Nicholas Goodrick-Clarke in Black Sun, “it is likely that few Americans today would have heard of the Illuminati. Due to the re-publication of her books and the popularisation of her ideas among the radical right, the Illuminati became a major theme of American conspiracy literature from the late 1960s onward.”

Nesta Webster, like Barruel and Robison before her, was quick to absolve English Freemasonry of any involvement in political subversion. By focusing on the ‘evil German’ Illuminati as the guilty party, she effectively diverted attention away from Britain’s clandestine role in many of the upheavals in Europe. That Mrs Webster, the daughter of a senior partner in Barclays Bank, was a committed British imperialist with close ties to the English ruling class, there is no doubt. After the First World War, Nesta Webster supported punitive measures against Germany. Starting in 1922 she penned a series of attacks against Pan-Germanism in the pages of The Morning Post. Webster believed that powerful forces in 1920s Germany had secretly allied with Bolshevik Russia to bring down the British Empire. She castigated the Jews for being dupes of Pan-Germanism who “from the time of Frederick the Great had frequently acted as Prussia’s most faithful and efficient agents.”

With Hitler’s rise to power in the 1930s, Webster supported Nazi Germany, seeing in the Third Reich a bulwark against the hated Soviet Union. A position held by sections of the British establishment who believed Hitler’s Germany was more of a threat to Communist Russia than the British Empire.

More than any other author, Nesta Webster’s writings have played a major role in shaping the political/occult conspiracy theories in the English-speaking world for nearly a century. In the years prior to the Second World War, Webster enjoyed a special relationship with elements in British Intelligence. In fact her book World Revolution: The Plot Against Civilisation was based on lectures she gave to British military officers and members of the Secret Service at the end of the First World War.

Richard Gilman, author of Behind World Revolution: The Strange Career of Nesta H. Webster, who extensively studied her life, concluded that the real “function of her books was to blame the crimes of Britain’s power elite on others as well as defend the Empire in general.”

This article was published in New Dawn Special Issue Vol 8 No 3.
If you appreciate this article, please consider a contribution to help maintain this website.