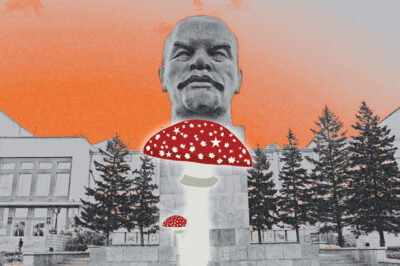 Lenin was a mushroom! At least according to Sergey Anatolyevich Kuryokhin, the pioneering Russian musician, activist, and prankster from St. Petersburg who convinced viewers of Leningrad Television in January 1991 that the leader of the Bolshevik Revolution and father of the Soviet Union had eaten so many psychedelic mushrooms, he ended up becoming one.

It’s hard to believe such a claim could be taken at face value by anyone, but Russians under communism had long been conditioned to believe whatever appeared on State-run television.

Delivering his argument with a straight face and a serious tone, and citing the work of genuine sources, Kuryokhin was able to convince his audience of Lenin’s secret fungi metamorphosis – though a large part of the prank’s success also came from the fact that he was speaking about a man who Soviet citizens had been brought up to revere, someone never publicly mocked or satirised.

In a paper on the incident, University of California, Berkeley Professor Alexei Yurchak claimed that if Kurykohin had “been speaking of anyone else, his words would easily have been dismissed as a joke.”1

“But Lenin! How could one joke about Lenin? Especially on Soviet television,” Yurchak explained. “Audiences could not help but attribute some credibility to the revelation.”

Not only did Kuryokhin claim to have “absolutely irrefutable proof that the October Revolution was carried out by people who had been consuming certain mushrooms for many years” but that the mushroom consumption had in turn “displaced their personalities.”

The day after the broadcast, a delegation of old Bolsheviks approached Galina Barinova, who oversaw a regional committee of the Communist Party, and demanded to know, “Could it be true that Lenin was a mushroom.” “NO!” answered Galina Barinova. “But…” the Bolsheviks insisted, “they said so on TV yesterday.” “It’s not true,” she responded. “Because a mammal cannot possibly be a plant.”

Ironically, in 2003, then US Secretary of State Colin Powell claimed at the United Nations to have “irrefutable” evidence that Iraq possessed weapons of mass destruction – a false claim that, like Kuryokhin’s, was believed by many, but tragically unlike Kuryokhin’s led to the death of hundreds of thousands of people.

Kuryokhin’s mushroom prank aired on TV less than a year before the collapse of the Soviet Union, but the artist was just getting started. His rebellion against the rigidity of communist Russia would soon take on the nation’s new capitalist form too.

With the end of the Soviet Union, Kuryokhin like many artists was optimistic at the prospect of a new Russia. However, as reality began to set in, Kuryokhin and other dissidents soon came to see this new Russia as a state even worse than the previous.

“He was very disappointed with liberals at that time, plus by senseless post-modernity, by the chillness of the people surrounding him in the liberal artist circles, and he was in search of something different,” said Aleksandr Dugin, the Russian philosopher, author, and political strategist who was close friends with Kuryokhin in his final two years.

Kuryokhin was among the first of the liberal artists who, upon seeing the reality of a post-Soviet Russia, became disillusioned with the vacuousness of liberal capitalism and sought to replace it with something new and spiritually substantial. Thus came the creation of the National Bolshevik movement. A radically syncretic and paradoxical movement co-founded by Dugin, Kuryokhin, writer Eduard Limonov, and punk musician Yegor Letov, the National Bolsheviks combined anti-liberalism, the Situationist Avant Garde, the metaphysical, and the absurd with loud imagery and anti-government protest.

A man who enjoyed pushing the envelope and making waves wherever he went – including through his experimental music group Pop Mechanics – Kuryokhin’s involvement with National Bolshevism was no different, and he used politics as another vehicle for his art, even inserting Dugin and Limonov into the final Pop Mechanics performance, which was dedicated to the British occultist Aleister Crowley.

According to Professor Fabrizio Fenghi in his book It Will Be Fun and Terrifying: Nationalism and Protest in Post-Soviet Russia, Limonov “read a text about ‘fallen angels’ and sang” during the concert, while Dugin read excerpts from Aleister Crowley’s work as Kuryokhin “performed some pseudo-ritualistic and seemingly mocking gestures” from behind.

“He was much larger than a party. He used National Bolshevism as a line of his conceptual music, one of the melodies in the sequence,” Dugin explained, adding that one core element of Kuryokhin’s personality was irony.

But Kuryokhin was also “really serious about religion, about metaphysics, about death, about philosophy” and “about the basic structure of human being,” Dugin said – using his art and his stunts to push a greater message, concept, or ideal.

In their ‘Manifesto of the New Magi’ (on page 70 of this issue of New Dawn), Kuryokhin and Dugin called for a return to ‘magic’ to bring on the revitalisation of politics and art, which they argued had degenerated to the lowest point.

“Only the direct, total replacement of art and politics with MAGIC can save this situation,” the manifesto declared, claiming that the source of magic in both institutions “has gradually been lost sight of.”

“Instead of a separate art, separate politics, and separate magic, a new synthetic discipline should be introduced, that of MAGIC, which directly establishes its own politics and its own art,” they said, concluding that art and politics should become the ritual itself.

The National Bolshevik movement is often considered to have been Kuryokhin’s last major stunt, or work of art, before he tragically died of a heart condition in 1996 at the age of just 42.

Yegor Letov passed away in 2008 and Eduard Limonov died in 2020, making Dugin the last of the co-founders of the National Bolsheviks still standing.

Kuryokhin was never a well-known figure in the West, and his international obscurity continues today, though with the advent of the internet his work has reached small new audiences online in the United States, United Kingdom, Australia, and beyond.

Perhaps more importantly, the conditions that led to Kuryokhin’s art are still present around the world, though largely in the West, where another generation of youth find themselves at the precipice of societal change, in a late state of decline.