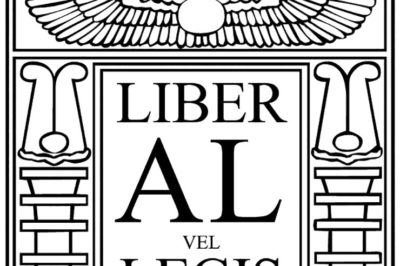 In 1904, while visiting Cairo with his wife Rose, the English occultist Aleister Crowley received a text known as The Book of the Law via direct voice transmission. He described its author as “a messenger from the forces ruling this earth at present.” Three one-hour sessions over a three-day period resulted in 220 verses announcing a New Aeon with a New Law for mankind – a changing of the guard of the spiritual hierarchy ruling the planet. The Book of the Law proclaims a new era in ethics, morality, culture, and science.

Crowley insisted The Book of the Law proved the first postulate of religion, the existence of Higher Consciousness independent of the human brain and body. He would spend the next 43 years of his life explaining and proclaiming its message and significance in all his writings.

An inspiring, mysterious, and poetic text, devotees of The Book of the Law interpret its message as the sole rule and guide of their lives. Many have found it fulfils that role admirably, never failing to provide insight and direction when called upon.

We must then ask ourselves: What does the inauguration of a New Aeon mean? I remember a cynical comedian from my childhood. He called himself “the Old Philosopher” and had recorded a funny rant on a 45rpm record, mocking the celebrations of the New Year. His pitch was something like, “New what? New worries, new problems? I’d rather have out with the New and in with the Old because I am familiar with the Old!” I remember laughing with my parents as I first became aware of the irony of the dual-edged nature of progress. Looking at the New Aeon from my perspective today, I am acutely conscious of that irony in a manner that I was not when I took my first steps on this path a half century ago.

This new Aeon of the Child (Horus) follows that of the Father (Osiris) and the Mother (Isis). While Crowley spoke of these aeons as 2,000-year periods – seemingly corresponding to the astrological divisions of the Precession of the Equinoxes – I think they may best be understood as longer term symbolic constructs rather than calendrical dating systems. The aeons appear to be indicators of larger cultural and historical trends by which human progress and evolution may be understood and identified.

The Aeon of the Mother (Isis) is characterised as a time of unity with Nature, the ascendant Priestess, intuition over intellect, before the widespread use of writing and even language, the Palaeolithic period. Hunter-gatherers searching throughout the land, moving where directed by the patterns of rainfall, weather and soil fertility, maintaining a synchronous and harmonious relation with the environment that bespoke a oneness and lack of separation. Cave dwelling and the building of rudimentary shelters, individual and communal skirmishes, the fears of the night assuaged by the introduction of fire, the opening of the sciences by the charting of the heavens. Paganism reigned as the spiritual answer to the questions of existence. The many gods who controlled the world were appealed to with intention and sincerity that embodied the fervour, fear, and gratitude of a dependent human being, the Babe sustained at the Breast of the All.

The Aeon of the Father (Osiris) introduced the formula of self-sacrifice, the religion of the Dying God. From Osiris and Adonis to Christ, the community was ‘saved’ by the courage of the Chosen One, willing to plunge into Death at the command of a Greater Destiny whose impersonality demanded an abrogation of self-interest to the wider needs of his fellows. At the same time, mankind began to exercise dominance over Nature. Building a more dependable food supply with the mass herding of pastoral animals and land and crop cultivation. The taming of rivers with dams, the massive construction of edifices that towered above the landscape and celebrated the power of the mind and our species. Language, writing, philosophy, measurement were all aspects of this purposeful rearrangement of the natural world, the shaping and sculpturing of reality as if man were a co-creator working with the Heavenly Father to root out chaos and leave his personal stamp on existence.

At the same time, suffering was conceived as the norm. Massive armies raged through continents sweeping aside civilisations with their swords and arrows and the armoured steeds on which they rode. Life was cheap. Individuality and personal rights were unknown. Sin was a constant nagging force whose instinctual power and insistence must be rejected and triumphed over at all costs. Salvation was to be sought in the after-death state and was based on obeying dictated ethical and religious principles, unquestioning adherence to the teachings of those who knew better, those who made the rules. Expect no satisfaction in the here and now. This is the testing ground of humanity, the place of Trial and Tribulation. These challenges would temper the soul with hardship. Their mastery would open the joys of the next world to the acolyte who listened.

The current Aeon of the Child (Horus) represents a more confident period of self-awareness, as the Babe bursts forth fully-armed to confront the world in which he or she is launched. The legitimate birth of the rightful claimant of existence, one who participates without restriction in the natural order of the universe, cognizant, questing, and entitled. Just watch kids at play. Crowley calls this period that of “the recognition of the individual as the unit of society.”

On the other hand, there are the terrors of the Child contradicting this unity, the fears and insecurities as it navigates its way through the darkness of uncertainty. The natural and optimistic self-assertion of the soul freed from oppression is opposed by the demanding irrationality of the squalling baby – absolutely shameless in its own self absorption. As a parent himself, Crowley was well aware of this dual nature and had no hesitation about expressing it.

In his Introduction to the first popular publication of The Book of the Law in 1938, Crowley wrote the following:

Observe for yourselves the decay of the sense of sin, the growth of innocence and irresponsibility, the strange modifications of the reproductive instinct with a tendency to become bisexual or epicene, the childlike confidence in progress combined with nightmare fear of catastrophe, against which we are yet half unwilling to take precautions.

Consider the outcrop of dictatorships, only possible when moral growth is in its earliest stages, and the prevalence of infantile cults like Communism, Fascism, Pacifism, Health Crazes, Occultism in nearly all its forms, religions sentimentalised to the point of practical extinction.

Consider the popularity of the cinema, the wireless, the football pools and guessing competitions, all devices for soothing fractious infants, no seed of purpose in them.

Consider sport, the babyish enthusiasms and rages which it excites, whole nations disturbed by disputes between boys.

Consider war, the atrocities which occur daily and leave us unmoved and hardly worried.

These words could have been written this morning rather than nearly eighty years ago. Perhaps if we substitute “Facebook” for “the wireless” we can feel totally up-to-date.

Crowley wrote further of the fraudulent political constructs of democracy, fascism, and communism from which we still suffer. He described them as “cavort[ing] crazily all across the globe.” He pegged them for what they are: “abortive births of the Child, the New Aeon of Horus.” A sobering characterisation that the purveyors of Fake News might contemplate as they work to inflame the passions of their historically-illiterate flocks.

In contrast with the common tendency to over-idealise progress and modernity, one cannot help but compare Genghiz Khan of the Aeon of Osiris with Kim Jong Un, his pathetic alter-ego in the Aeon of Horus.

As an admirer of Thomas Jefferson, I believe his writings in the Declaration of Independence were the opening doctrinal pronouncement of the politics of the New Aeon:

We hold these truths to be self-evident, that all men are created equal, that they are endowed by their Creator with certain unalienable Rights, that among these are Life, Liberty and the pursuit of Happiness.

Jefferson wrote further that government must not be trusted to be the arbiter of human conduct. “In questions of power, then, let no more be heard of confidence in man, but bind him down from mischief by the chains of the Constitution.” Imagine if the chains of the Constitution and its Bill of Rights were wrapped around the necks of the violent thugs raging through the streets of Berkeley, California as I write – transforming a town noted as the birthplace of the modern “Free Speech Movement” into a bastion of the tyranny of the mob and the triumph of censorship and intimidation.

With all that said, Crowley did not waver in his faith in this new stage of the evolution of human consciousness. He acknowledge a balance in all things. He was specifically singled out as the Prophet of the New Aeon and he wrote this glowing tribute in that same Introduction, “Liberty stirs once more in the womb of Time.”

When I become discouraged by life’s hard experiences – or the caterwauling of our modern Anarchists, Snowflakes and Social Justice Warriors – I can turn for solace and inspiration to the words that express my fondest hopes for the future of humankind in the New Age. Words that celebrate a new day coming – words that help me learn to gaze with wisdom, patience, and tolerance at the birth pangs of the New Aeon.

Among the Class A writings of Thelema (those that must not be changed inasmuch as the style of a letter because, as Crowley indicated, they originate from the highest level of Truth) is Liber Tzaddi. It is one of my favourites, an optimistic description of the transition to this New Age of Horus. Here is a long extract. If I may be forgiven for presuming to speak for Crowley, I imagine these words may have sustained him as well.

This article was published in New Dawn Special Issue Vol 11 No 3.
If you appreciate this article, please consider a contribution to help maintain this website.