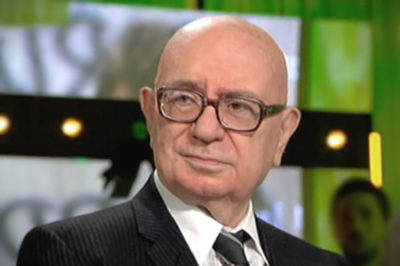 Russia has always perceived of itself as a Eurasian country.
– President V.V. Putin, November 2000

…an epochal, grandiose revolutionary admission, which, in general, changes everything. The prophecy of [French conspiratologist] Jean Parvulesco has come to pass… There will be a Eurasian millennium.
– Alexandre Dugin, Russian thinker and author

The French visionary writer Jean Parvulesco’s main agent – if not hope – for world change rests with Vladimir Putin. Parvulesco argues that – whether we are aware of it or not – we find ourselves at the crossroads of “great history,” where a totally new era is about to be born.

For such a new period to begin, the old needs to die first. For Parvulesco, this is the old “democratic system” of political correctness, which he feels has now reached its limits and is no longer supportable. It has become “a permanent and total nightmare.” Many will wonder how the “new world” is to come about. The best example of what appeared to be a sudden, almost instantaneous collapse is seen in the fall of the Soviet Union, two decades ago. It illustrates that powerful empires can, from one day to the next, completely disappear, requiring a new society and structure to be built from the ground upwards.

When news of the collapse of the Soviet Union appeared on television screens, the system had already imploded. It was just the public revelation of its death; the disintegration of the communist system had already occurred. According to Parvulesco, the collapse of “democratic Europe” has already taken place too, and we are now in the years between its collapse and the public acceptance of its demise – and the start of a new Europe.

For Parvulesco, the evidence of the collapse of this system is apparent in the recent political history of Italy and Germany, and to some extent that of France and Great Britain. But in each case he feels the same dire situation has transpired: an “immense empty desert,” the wasteland of “social democracy.” A local version of what he sees as a “worldwide conspiracy,” but one that has failed and will soon be sent back to the “black hole” from where it came.

Parvulesco knows what to write on the death certificate; but he also feels he knows what the New Europe will be: the “Eurasian Empire of the End Times.” He labels our timeframe an interregnum where what happened to Russia is actually evidence that dramatic political change is possible. The Soviet Union was the first domino to fall, with the others in Europe soon to follow.

Could he be right? In 1976, Parvulesco published “La ligne géopolitique de l’URSS et le ‘projet océanique fondamental’ de l’Amiral G.S. Gorchkov” (The geopolitical line of the USSR and the ‘fundamental oceanographic project’ of Admiral G.S. Gorchkov), which he labelled “political-revolutionary research.” In it he wrote that the Soviet Union would end up changing the course of history. And changing the course of history is, for Parvulesco, the only true goal politics should have.

Parvulesco therefore provides an interesting type of prophecy. Whereas most prophets predict the end of the world at a given time, his type of prophecy brings more detail about the type of change and how. As to its timeframe, it is very much like “when the time is right.”

So, what is meant to happen? Parvulesco argues that across Europe there are geopolitical groups at work – often clandestinely – laying the groundwork for the Eurasian agenda. Like the Project for a New American Century, there are other think tanks hard at work – and judging from the amount of newspaper headlines they don’t get, much more secretly – to bring about a new Eurasia. Despite their secrecy, Parvulesco was able to lay his hands on one article titled “The Imperial Eurasian Pact.” Similar to the idea put into action by the Neocons after 9/11 (an agenda that claimed to want to bring peace to the world by using the power of America’s military might), this group states that, “It is the confrontation of our imperial and catholic [universal] doctrines with the current political-historical reality […] which will see the final emergence of the catholic Great Empire which constitutes our ultimate objective, the Imperium Ultimum, the Regnum Sanctum, which should comport, in principle, three operational stages […].”

The first stage is the creation of a Paris-Berlin-Moscow axis, that is considered to be the axis along which this major change will occur. This axis will tie together the destiny of three nations (France, Germany and Russia).

The second stage is the integration of what was traditionally known as West and East Europe, together with Russia, Siberia, India and Japan.

The final stage involves what is termed the destruction of the “global democratic conspiracy,” led by the United States, including a revolutionary liberation of its people, after which America as a whole (North and South) will become one entity. We can only wonder whether the present drive by the US to expand NAFTA and create a North American Union are steps in this direction.

The end of the planetary superpower that is the United States is forecast to be an act of self-destruction, a continental civil war very much on par with the first Civil War. The extreme dissatisfaction within the United States, the extreme disparity between the archconservative religious community and the more liberal, means that being elected as president on a genuine agenda (rather than one of total style but no substance) is almost impossible. For Parvulesco, it will be primarily America’s Catholic, ex-European community that will lead America towards its new destiny – and cause the demise of the current “global conspiracy.” There will be a new Europe, but also a new America.

In the end change is a social process, but it often needs a symbol. Hitler became the face of World War II, Lenin – more than Marx – that of communism, etc. So who is the new face of Europe, and who is the creator of this new Eurasian Empire? For Parvulesco, that “messiah” is already here: Vladimir Putin. Even though Putin is no longer president, his influence as Russian prime minister remains virtually omnipresent.

Vladimir Putin remains the face of the New Russia, a country with a vast territory and natural resources that is able to hold Europe to ransom, energy-wise, should it ever want to.

Who is Vladimir Vladimirovich Putin? This is a question that many in a non-Parvulesco universe have also asked. Seen as a pawn of the KGB’s successor, in Parvulesco’s world, Putin is the direct emanation of the secret revolutionary groups of the Armed Forces of the Soviet Union. These, he believes, are trying to make their decades-long secret battle open and public, moving from a type of synarchic, behind the scenes government, into a more open type of rule.

Whereas some conspiracy theorists claim the CIA and various secret societies like Skull & Bones are the real puppet masters of American politics, Parvulesco says the situation in the Soviet Union was not much different. Ruled for a long time by secret powerbrokers whose agents are now stepping out into the open taking the course of Russian politics into the direction they have been trying to steer it from behind the veil for a number of decades.

Unlike in the US where the “conspiracy” is often faceless, Parvulesco lists two people as Russia’s master conspirators. One was the chief of the Soviet security service (GRU) and one time Commander in Chief of the former Warsaw Pact, General S.M. Stemenko (died 1976), the other was Marshall N.V. Ogarkov, a former head of the Soviet military. Marshall Ogarkov, who died in 1994, is rumoured to have been behind a failed coup attempt which in turn led to a kind of counter-conspiracy that brought Mikhail Gorbachev to power.

Parvulesco is convinced that if this counter-conspiracy had not succeeded, the end of the Soviet Union would have occurred several years earlier, with a transition from the Soviet Union to the New Russia that would have been much harsher. Indeed, it underlines that years before the actual demise of the Soviet Union, the regime was comatose, ready for the taking, just like – in Parvulesco’s eyes – Western Europe (and the United States of America) is now.

Parvulesco is not alone in his assessment of these two men. French intelligence expert Pierre de Villemarest who wrote the history of the GRU, labelled “the Soviet’s most secret service,” says Gen. Sergei Matveevich Stemenko was “one of the first geopoliticians of the Soviet Union, perhaps even the first.” Though de Villemarest calls Stemenko a Soviet, he considered himself to be truly a “Great Russian.” “For this caste,“ writes de Villemarest, “the Soviet Union was an Empire that was called to dominate the Eurasian continent, not only from the Ural to Brest, but also from the Ural to Mongolia, from Central Asia to the Mediterranean.”

The “dream” of Russia à la Stemenko may be seen as merely returning back to the days when Russia was a true empire, before the days of the Bolshevic Revolution. But for Parvulesco, that in itself is part of a larger, and most intriguing puzzle – a mission.

The above is connected to this article in the same issue of New Dawn: Men of Mystery: Raymond Abellio & Jean Parvulesco – Their Vision of a New Europe

This article was published in New Dawn 111.
If you appreciate this article, please consider a contribution to help maintain this website.

Vladimir Putin was the subject of an article in the Sept-Oct 2001 issue of New Dawn that prophetically discussed the symbolic significance of his ascension to power and the important role he was destined to play in the future of not only Russia, but the world.