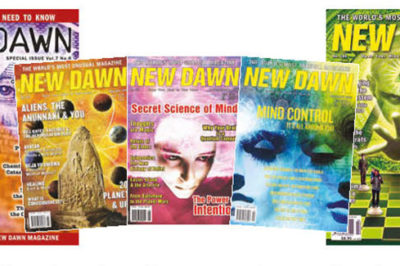 “The paths of Fantastic Realism… do not resemble the ordinary paths of knowledge.”
– Louis Pauwels & Jacques Bergier, The Morning of the Magicians

As Richard Smoley rightly pointed out, “a noted predecessor” of New Dawn magazine “was the French review Planète (‘Planet’), published by Louis Pauwels and Jacques Bergier as a follow-up to the sensational success of their book Morning of the Magicians.” Inspired directly by Pauwels’ and Bergier’s book and Planète journal, New Dawn continues a subversive tradition of delving into subjects as fascinating and wide-ranging as secret societies, ancient mysteries, conspiracies, arcane prophecies, vanished civilisations, UFOs, supernatural phenomena, the awakened state….

Like the French Planète (published 1961–1972), New Dawn was founded on the premise that reality is far more fantastic than how we limit it under conventional scientific, political, historical and cultural models. “If New Dawn magazine,” wrote editor David Jones in the March-April 2014 issue, “has a guiding philosophy or general orientation,” it would be, “Fantastic Realism with its slogan ‘Nothing that is strange is foreign to us!’”

Grounded in the worldview of Fantastic Realism, New Dawn magazine is dedicated to exploring what Jacques Bergier and Louis Pauwels identified in The Morning of the Magicians, namely:

Trends of thought that escape the notice of the trained observer; writings and works to which the sociologist pays scant attention, together with social phenomena that he considers too insignificant or too odd to worry about, are perhaps a sure indication of events to come than facts that are there for all to see and the openly expressed opinions and general trend of thinking which cause him serious concern.

What exactly is Fantastic Realism? The answer is clearly outlined in The Morning of the Magicians:

We call our point of view fantastic realism. It has nothing to do with the bizarre, the exotic, the merely picturesque. There was no attempt on our part to escape the times in which we live. We were not interested in the ‘outer suburbs’ of reality: on the contrary we have tried to take up a position at its very hub. There alone, we believe the fantastic is to be discovered – and not a fantastic leading to escapism but rather to a deeper participation in life…. The fantastic is usually thought of as a violation of natural law, as a rising up of the impossible. That is not how we conceive it. It is rather a manifestation of natural law, an effect produced by contact with reality – reality perceived directly and not through a filter of habit, prejudice, conformism.

Long before the ‘X-Files’, ‘Ancient Aliens’ and the contemporary fascination with conspiracies and cover-ups, Fantastic Realism raised questions like: Are we all in a collective conspiracy to hide the truth, and is science such a conspiracy? Do secret societies exist and have they influenced history? What special knowledge did the ancients possess that we may not possess now? What role did occult forces play in the origins and rise of Nazism? What does the future promise for our civilisation? Are there Mutants among us? Does extrasensory perception reveal that human consciousness has advanced beyond its currently accepted limits? What connects the ancient art of alchemy and modern atomic physics?

Readers of New Dawn magazine will immediately realise they are on familiar territory. Some readers may even find themselves in agreement with author and esoteric scholar James Wasserman when he described Fantastic Realism as a look behind “the many masks of God.” Fantastic Realism, Wasserman noted, “declares that an objective appreciation of the material world is a means by which we may attain an awakened state of consciousness, the next step in human evolutionary destiny.”

Implicit in the approach pioneered by Fantastic Realism is a rejection of all reductionism, conformity, as well as the false dichotomy of Either/Or, Black-White thinking. Presenting hypotheses, examining the ‘outer limits’ of the human experience, and highlighting modern scientific and social falsehoods, does not mean embracing crusading dogmas or sentimental simplistic answers. It does, however, require leaving behind the ‘accepted wisdom’ of the herd.

“Real intelligence,” the French writer Aimé Michel said, “lies in being able to think further than is allowed.” Aimé Michel, a Fantastic Realist collaborator and influential UFO researcher, always focused on “all that goes beyond the human,” maintaining that his objective was not to be limited by any external constraint. “It’s time to discover that all systems of thought,” Michel asserted, “are actually systems to AVOID thinking!”

The task then, as summed up in the slogan of the New Dawn masthead ‘Open Your Mind to New Ideas’, is to transcend the narrow confines and closed-minded thinking of consensus reality. But first, the reader must not be afraid to question conventional knowledge, put aside all prejudice and assumption, and consider a different method of interpreting reality. As Louis Pauwels urged his readers all those years ago, what is needed is to look at reality with new eyes or, more accurately, with “awakened eyes.”

A former student of George Gurdjieff, Pauwels made a key component of Fantastic Realism Gurdjieff’s observation that Man is asleep and must be shocked into an awakened state in order to perceive true reality. With this in mind, the astute reader of New Dawn gains a deeper awareness and understanding of what this magazine is all about. New Dawn magazine is a magic portal to another way of seeing Man and the world, a doorway to a new consciousness, a new humanity, and a new era.

This article was published in New Dawn 165.
If you appreciate this article, please consider a contribution to help maintain this website.