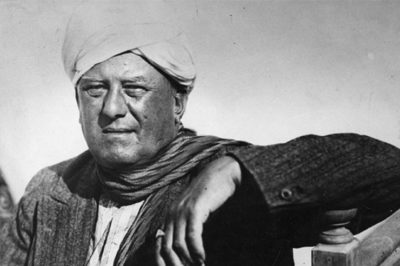 Aleister Crowley (1875–1947) is remembered as a libertine, philosopher, mountaineer, magician, and supposedly the “wickedness man in the world.” He wrote bad poetry, pornographic books, novels and a vast array of literature.

He is best known as being an infamous occultist and the scribe of The Book of the Law, which introduced ‘Thelema’ to the world. Crowley was an influential member of several occult organisations, including the Golden Dawn, the A.’.A.’., and Ordo Templi Orientis.

One of the most enigmatic aspects of Crowley’s life was his receipt of what he believed to be a document dictated by a ‘praetor human intelligence’ known as Aiwazz.

Crowley studied ceremonial magic for many years, but he felt he had not found the success he was searching for. He and his wife Rose travelled to Egypt where they spent a night in the King’s Chamber of the Great Pyramid. Rose became clairaudient and began to repeat the phrase “They are waiting for you.” Crowley was bemused as Rose was not known for her interest in magic or occultism, and hitherto had shown no signs of psychic ability. But she was insistent, and perhaps more to humour his young wife Crowley invoked the god Thoth and asked a number of test questions.

Surprisingly, the answers were way beyond his wife’s understanding and showed a level of sophistication that piqued Crowley’s interest, to say the least. The final test involved an image of Horus at a local museum. He asked the communicating being to identify it. Rose very quickly identified various images of Horus, but it was the stele of Ankh-ef-en-Khonsu that she was most drawn to, an artefact known as inventory number 666 (Crowley’s personal number as ‘The Master Therion’). The being not only identified Horus on the stele but caused Rose to explain that the ‘intelligence’ attempting to communicate was not Horus himself but his representative Aiwazz.

On 8 April 1904, between noon and early in the morning, Crowley experienced a dark and overwhelming presence behind him. It communicated through him a bit like automatic writing and dictated over three days what became known as Liber AL vel Legis or The Book of the Law. The Book of the Law offers a new revelation and the revival of the Egyptian cult of Nuit, Hadit and Horus, of which each of its three chapters are dedicated. It is a sophisticated work with many hidden meanings, numerical codes, and deep insights. Even today it is studied with diligence, and commentaries have been written on it since its first appearance. The Book of the Law heralds a New Aeon beginning in 1904, the ‘Aeon of Horus’; preceding this had been the Aeon of the dying God (Osiris) and that of the mother (Isis). The Aeon following Horus is that of Maat, or truth, and will mark the completion of one great cycle of cosmic time.

The term Aeon is a little different from the terms ‘age’ or ‘cycle’. Originating within Gnosticism, Aeons were seen as emanations of the divine that mediate between man and the spiritual hierarchy. Using that understanding, we can appreciate that each Aeon is not simply a period of time but a time period under the governance of a certain spiritual force (the current under Horus) and comes with a specific spiritual formula and practice, and its own prophet. In this case, Crowley saw himself as the prophet of the New Aeon of which the religion was Thelema.

At first, Crowley was unsure how to evaluate the document he had received and left it locked away for quite a period of time. He vacillated between seeing Aiwazz as his personal unconscious or some aspect of his own higher self. Over time Crowley became convinced of the significance of its message and wrote various commentaries as well as ‘receiving’ other ‘Class A’ documents, a term he used for documents received from ‘praetor human intelligences’.

The Book of the Law calls for the abandonment of all previous religious philosophies, especially taking aim at the three monotheistic religions. It is brutal when it comes to Judeo-Christianity in that it rejects the formula of the dying god with its emphasis on pain, suffering, sexual suppression and guilt. This is replaced with the formula of the divine child Horus whose innocence brings with it sensuality and openness. At the same time Horus is related to the Greek god Mars, the god of war, hence Crowley believed there would be a great period of violence after the start of the New Aeon which would continue until the declaration of the final ‘Aeon of Maat’ at a future date. In Egyptian mythology, Horus also has a dark brother called Set (or Seth) and he represents the soul of the Aeon of Horus: brooding, unpredictable, cold and volatile.

On a political level, The Book of the Law proposes a form of anarchy with total freedom for the individual but this is matched with total responsibility. When The Book of the Law states “Do What Thou Wilt Shalt be the Whole of the Law” (Liber AL 1:40), it is not exclaiming do whatever pleases you or do what you want, it is saying to follow your true destiny. This destiny comes from finding who you really are; this true self is known as the Will or the Star and the relationship between stars is known as “love,” hence “Love is the Law, Love under Will” (Liber AL 1:57).

The concepts of Thelema (Will) and Agape (Love) are central to The Book of the Law and both via gematria add to the number 93, hence the significance of this number within the teachings. (The Hebrew spelling of Aiwazz also adds to 93).

In Ancient Egypt the night sky was considered to be the afterlife, and when someone died they became ‘a star’; each star had its own unique place in the cosmos, its own orbit and its own destiny. These ideals are central to the politics of Thelema where “Every Man and Every Woman is a Star” (Liber AL 1:3).

It has been claimed the philosophy of The Book of the Law is in many ways elitist. It is based around the concept of ‘Arete’, or excellence, which could be interpreted as meritocracy. While the individual has the potential for total freedom, he must exercise it in the pursuit of finding himself, or as Liber AL (1:42) states “thou hast no right but to do thy will.”

Kenneth Grant (1924–2011) was one of the most influential and controversial representatives of Thelema during the last century. His publications were prodigious including a series of nine volumes expounding his deep and insightful view of Thelema. Grant came to realise that the rather indulgent hippy view of Thelema so popular in the Sixties and Seventies (Crowley was pictured as one of the people on the Beatles’ Sgt. Pepper’s album cover) sold the vision of Thelema short. He took seriously the non-terrestrial origin of The Book of the Law and began to investigate its antecedents in earlier cultures. He found that the teachings regarding sexuality in Liber AL were not simply calls to ‘have a good time’ but were part of an age old Tantric or yogic tradition demanding great discipline and perseverance. While the general teachings of Liber AL may offer some level of guidance for the average man and women, its inner teachings could be aligned to the esotericism of the Tantras, India and Sumer. Such a teaching continued unseen in the inner chambers of alchemists, magicians, sorcerers and Docteurs of Voudoun.

This new understanding saw Thelema as a re-instatement of the ancient Typhonian cult of Egypt, and brings us to its significance in any consideration of Egyptian spirituality. Thelema is, in any ways, a unique form of Egyptian polytheism with a highly developed social, political and spiritual philosophy. At its core was a revelation for the New Aeon through a communication with a non-terrestrial representative Aiwazz (among others). This teaching includes both a general and esoteric form, the esoteric showing a clear continuity from the earliest known forms of Tantra (Shaivism) and into Sumer, Egypt and beyond.

Whatever we are to make of Crowley’s private life – and to be honest even the most sympathetic biographer would suggest his treatment of others left a lot to be desired – The Book of the Law and Thelema represents a fascinating glimpse into the adaptation of an ancient Egyptian ‘religion’ for the modern period.


This article was published in New Dawn Special Issue Vol 8 No 6.
If you appreciate this article, please consider a contribution to help maintain this website.