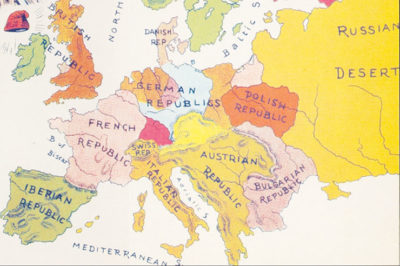 The cartoon map of Europe printed in the Christmas 1890 edition of The Truth.

Back in 1893, an elusive Englishman named Charles George Harrison (b.1855) delivered a series of six lectures to the Berean Society, a London based association of Christian esotericists. Harrison, described as a “mysterious and unknown figure,” was an English occultist and Anglican Christian. A record of his lectures can found in the book The Transcendental Universe. What is clear is that C.G. Harrison had access to highly sensitive information and a good deal of inside knowledge of world changes then being engineered by certain circles in England.

In his second lecture Harrison spoke of “the next great European war” and of how the “national character” of the Slavic peoples would “enable them to carry out experiments in Socialism, political and economical, which would present innumerable difficulties in Western Europe.” The “next great European war” points to what would be the First World War of 1914-18, while the “experiments in Socialism” predict the 1917 Bolshevik Revolution which brought about the Soviet Union, one of the boldest and bloodiest politico-economic experiments in human history. Harrison said the plan of a particular secret elite, which he doesn’t mention by name, was that “the Russian Empire must die that the Russian people may live.” It is amazing to consider these truly prescient words were spoken in 1893, 21 years before the First World War and 24 years before the Russian Revolution. Today we know that in 1917 Bolshevik leader Vladimir Lenin was transported from Zurich, then the banking capital of the world, to Russia in a train loaded with gold and weapons to start the revolution.

How could he [Harrison] know about the forthcoming War as well as the “experiments in Socialism,” which would take a grip on Russia and its surrounding states for most of the twentieth century? If he was not, as he claimed, a “practical occultist” himself, it is reasonable to assume he had contact with people who were, and who had access to the malign plans…1

Another significant piece of information coinciding with Harrison’s insights into the future is a cartoon map of Europe printed in the Christmas 1890 edition of the satirical English weekly, The Truth. Over the map is written: “The Kaiser’s Dream.” It showed wherever monarchies had been up to that time, there were going to be republics. The Austro-Hungarian Empire of the venerable Hapsburg monarchy had disappeared, as had the centuries old Russian Empire. Over the territory of Russia we read the words “Russian Desert.” In addition, Germany is identified with the words “German Republics”! Commenting on this map from 1890, Sevak Gulbekian notes:

This map signifies not only a foreknowledge – similar to Harrison – of the fate of Russia to become a cultural as well as an economic ‘desert’, but also of the future splitting of Germany into ‘republics’. The magazine’s editor, Henry LabouchEre, was a Freemason. Was his remarkable foresight pure luck, or once again did he have some inside knowledge of future plans to shape the world?

Why destroy the Hapsburg Empire? The influence of the Catholic Hapsburgs, as heirs of the Holy Roman Empire, was felt through all Europe. As Catholic Europe’s most important royal house they posed a particular obstacle to Britain’s plans for the Continent. Austria-Hungary, along with the ruling Hapsburg dynasty, had to be wiped off the map in order to create a patchwork of small states in Eastern Europe. These could be easily manipulated by London. Count Arthur Polzer Hoditz, director of the cabinet of the last Austro-Hungarian emperor stated in his memoirs that, “the destruction of the Hapsburg Empire was carefully prepared.” Late 20th century research reveals the suicide in 1889 of Crown Prince Rudolf, the Hapsburg Emperor Franz Joseph’s only son and heir, was a planned political assassination. Less than a decade later in 1898 the Empress Elizabeth was brutally murdered by a secret society member in Geneva. And the killing in 1914 of Emperor Franz Joseph’s nephew Franz Ferdinand in Sarajevo by a member of the Serbian secret society of the Black Hand, had as its immediate consequence the outbreak of the First World War.

The occultist Rudolf Steiner (1861-1925), who knew a great deal about the mysterious nexus of politics and the occult, mentioned the above map in a talk given in Switzerland at the height of the First World War. He said the map, as a secret document, was in existence since the last decades of the 19th century. This is the same time as the British imperialist Cecil Rhodes was laying the foundations for “a secret society with but one object, the furtherance of the British Empire, and the bringing of the whole uncivilised world under British rule…” According to the American historian Carrol Quigley in his book Tragedy and Hope, Cecil Rhodes set up such a secret society known as the “Society of the Elect” in 1889.

Behind the outer façade of world affairs, suggested Steiner, the machinations of occult groups or ‘brotherhoods’ were at work. Certain of these brotherhoods had wanted the Great War to take place, and had manipulated events to bring it about. In doing this, they sought to protect the dominant economic position of the English-speaking world, and in turn to crush the ‘mediating’ role of Central European powers such as Germany, the Austro-Hungarian empire, and so on.

These occult brotherhoods – small groups of men who met together in ‘lodges’ and practiced ceremonial magic as a means of achieving certain goals – originated from the English-speaking (Anglo-Saxon) world and were allied, in particular, with Anglo-American interests. Their aim was to extend Anglo-American influence across the globe, and to ensure the predomination of Anglo-American culture. Furthermore, they sought to extend its superiority into the distant future; essentially to ensure that the present state of affairs continues evermore.

Rudolf Steiner in one of his lectures about the influence of secret societies on politics says that in the Slavic peoples there lies a “special future.” He believed at some point in the future a cultural-spiritual highpoint would be reached in the Slavic countries, principally Russia. This is apparently known to the Anglo-Saxon occult brotherhoods which seek to manipulate these powers and bring them directly under British domination. Steiner’s revelations, based in part on his intimate involvement with Europe’s leading secret societies, help explain the major events of the 20th century. Two world wars, the partition of Europe into the Anglo-American dominated West and the Soviet controlled East, the decades long ‘stand-off’ between Eastern communism and Western capitalism in the ‘Cold War’, the collapse of the USSR and the declaration of an Anglo-American dominated unipolar world, can all be traced to the dark intrigues of the Brothers of the Shadows.

This article was published in New Dawn Special Issue Vol 9 No 4.
If you appreciate this article, please consider a contribution to help maintain this website.

1. ‘Brothers of the Shadows: A Perspective on Conspiracies’ by Sevak Gulbekian, New Dawn 86 (September-October 2004)