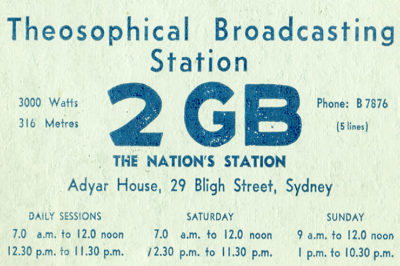 In 2001 as Australians celebrated the centenary of federation, no attention was paid to the role of mystic thinkers and esoteric ideas in Australian history. The vast majority of Australians know nothing of the “inner side” of their country’s political, cultural and religious evolution.

How many people are aware, for example, that the call sign of Sydney’s pioneering radio station 2GB stands for the martyred sixteenth century mage Giordano Bruno (GB)? Or that Prime Minister Alfred Deakin, a major force in the foundation of the Australian Commonwealth, was heavily involved in spiritualism and an enthusiastic student of Madame Blavatsky’s writings? Who knows of Walter Burley Griffin’s use of occult principles in the design of Canberra, the national capital? Who today remembers the Star Amphitheatre built at Sydney’s Balmoral Beach to welcome the “World Teacher, when He Comes”? Or that in the 1920s Sydney was proclaimed a “great theosophical centre”, home of the renowned and controversial occult teacher, the Bishop Charles Webster Leadbeater. A prolific writer on metaphysics and one of the world’s greatest clairvoyants, Leadbeater predicted the “emergence of the new ‘sub-race’ in Australia and New Zealand.”

In Other Temples, Other Gods, Nevill Drury and Gregory Tillett observe that, “despite its relative youth as a modern nation,” Australia, “has had a colourful and active history of occultists and occult movements.”1

Some of the leaders of progressive politics in Australian were also students of esoteric wisdom. In 1892 the labour organiser William Lane’s political novel The Workingman’s Paradise was published in Sydney. In it the working girl Nellie says scornfully, “There is no God. How can there be?” But the mysterious socialist Geisner rebukes her in words straight from Madame Blavatsky’s Secret Doctrine. There is at least “the imperishable breath of the universe”. For Geisner explains, “the Purpose of Life is self-consciousness…. God seeking to know God. Eternal Force one immeasurable Thought. Humanity the developing consciousness of the little fragment of the universe within our ken.”2

Disillusioned with the socialist movement in Australia, William Lane (1861-1917) established a communalist settlement in South America. A non-smoker and non-drinker, Lane was also a vegetarian who recognised the importance of a healthier attitude to diet. Inspired by Lane’s vision and example, hundreds of Australian workers sailed with him in 1893 to the “New Australia” colony in Paraguay.

The first Gnostic study circle was established in Melbourne in 1886. A year earlier the Reverend Charles Strong led most of his congregation out of Victorian Presbyterianism to found a native, ethical church, the “Australian Church”. Strong’s Australian Church sponsored the Religious Science Club, a forum for all manner of independent thought and spiritual enquiry.

Such was the interest in mysticism and spiritualism at the turn of the century that Australia came to prominence in the largest international occult movement of the day – the Theosophical Society.

“The occult movement which achieved the greatest publicity in Australian history,” explain Drury and Tillett, “and for which Australia was an international focus for many years, was the Theosophical Society.”3

In the early 1890s study circles devoted to Theosophy as presented in the texts of Madame Blavatsky had formed around Australia, leading to the founding of the Australasian Section of the Theosophical Society in 1895.

As Drury and Tillett explain:

The progress of the T.S. [Theosophical Society] was steady; lectures given, meetings held, leaflets and publicity material produced, and journals published. Lodges were established throughout Australia…. But it was the lecture tours of one man which established Theosophy as a movement of public interest in Australia: Charles Webster Leadbeater toured the country in 1905, following a lecture tour of several years in the U.S.A. during which he attracted thousands of enthusiastic listeners, and in 1914 he settled in Sydney, remaining there more or less permanently until his death in 1934.4

By the 1920s there were more paid-up members of the Theosophical Society than members of the Communist Party of Australia. The twenties witnessed a surge of Theosophical activism as Australian Theosophists sort to present a vibrant alternative to the mainstream, including the growing political ideologies of bolshevism and fascism. In addition to the public lectures, lodge meetings, and libraries, there was the Society owned Sydney Radio station 2GB as well as a successful publishing enterprise. Journals with titles like Advance! Australia and Theosophy in Australia, presented the society’s views and analysis of turbulent world events. Writing in Advance! Australia, one of the society’s leaders called for:

Walter Burley Griffin wrote of “Building for Nature” and the “outdoor arts in Australia” in the pages of Advance! Australia. Together with Marion Mahoney Griffin, he set up an “organic” community at Castlecrag, Sydney. Griffin hoped for the awakening of “disused powers of the universal mind” and social renewal as people turned inward to reconnect with “the possibilities of co-operation between head and mind in social service and creative effort.”6

Adyar Hall, the Theosophical Society’s impressive Sydney centre, served as the meeting place for many original social, political and spiritual groups, among them “The Australia First Movement”. Founded by P.R. Stephensen, a one time associate of Aleister Crowley, Australia First campaigned against Australian involvement in the Second World War.
A.R. Mills, a Melbourne solicitor active in Australia First, had been on the fringe of the Theosophical Society. During the 1920s and 1930s, Mills formed the world’s first Odinist religion, a mixture of Nordic mythology and occultism.

A persistent notion running through all the organisations and individuals concerned with esoteric wisdom is the conviction Australia has a special role to play in the dawn of a new Golden Age. Although popularised mainly by the Theosophists, the idea of Australia’s secret occult destiny surfaces in various mystical circles. In the early decades of the twentieth century the tireless Veni Cooper-Mathieson who founded – among other orders and institutions – the Home of Truth Esoteric College, the Church Universal, the Universal Truth Publication Company, taught that Australia was the “land of the dawning.”

AUSTRALIA: HOME OF A NEW HUMANITY

Madame Blavatsky, co-founder of the Theosophical Society, is credited with developing the theory that humanity evolves through a sequence of Seven Root Races, “four of which have already lived their day, the fifth still exists, and two are to appear in the future.”7

In a series of lectures delivered in Sydney in August 1915, Bishop Leadbeater proclaimed “Australia and New Zealand as the home of a new sub-race.” He had detected in Australia “children and young people of a distinctly new type.” A new antipodean human type characterised by intuition and the powers of synthesis. Jill Roe in her book on Theosophy in Australia writes:

Leadbeater urged his audience to align themselves with evolutionary law, assuring them that present confusions were merely transitional. He held that, despite distance and a small population, the Antipodes provided a favourable site for inauguration of a new era of brotherhood and cooperation, being neither decadent like Britain nor overblown by capitalist pride like America, and not yet delivered into unworkably democratic systems by ‘too young souls’. There was crudity, and reverse class legislation, but the wholesome environment held promise.8

In Leadbeater’s view, however: “It would be important to purify child-rearing practices, by abstinence from alcohol, meat and tobacco, and to educate the next generation correctly…. The reward would be the coincidence of a new sub-race and the World Teacher in fifteen or twenty years’ time.”9

By embracing techniques of physical and mental purification, Leadbeater believed in a couple of generations the whole of Australia would be controlled by a new people, who would constitute “what in Europe we should call the aristocracy of the country; that is to say, the best types”.10

Of course the Bishop’s message was not taken up by the Australian people and no new “aristocracy” emerged to lead the Antipodes into a new Golden Age. Was there any truth in Leadbeater’s predictions?

Nations, like individuals, have choices that eventually determine outcomes far beyond what can be recognised in the immediate. A collective – a group soul – like the individual soul must decide with which impulses to align. Nations can choose either the forces of materialism leading to decay and atrophy, or the higher influences of the spirit capable of leading to a New Beginning. In the case of Australia and New Zealand, the birth of the ‘new people’ was limited and distorted due to the infection of Mammonism. By concentrating on the search for outer happiness, following the path of the kingdoms of this world, the Australian nation stifled the quest for inner transcendence and the Kingdom of God.

By taking the way of materialism Australians cut themselves off from the subtle influences of the spirit and cosmic destiny. Manning Clark, Australia’s greatest historian, expressed the spiritual crisis of modern Australia when he said:

The decline of faith begat nihilism, and nihilism begat hedonism. It looked as though in the contest between Mammon and ‘millennial Eden’ Mammon had won. The dreams of all those who had migrated to the great south land had evaporated. The Aborigine had been corrupted and debased by contact with the white man. The voices of the Catholic who had spoken of a land dedicated to the Holy Spirit, the Dutch Protestants who had called for the discovery of a land that would yield ‘uncommonly large profit’, and the pleas of the followers of the Enlightenment with their faith in human perfectibility, had all dropped from a roar to a whisper, Mammon had won: Mammon had infected the ancient continent of Australia. The dreams of humanity had ended in an age of ruins.11

Yet in every generation, and in every nation, there is always a remnant of men and women who have not succumbed fully to negative earthly bonds. They are the silent ones who stand among the ruins of the modern era, living testimonies to the higher world of the spirit. The ability of any nation or people to realise their spiritual potential and partake in the dawn of a new Golden Age depends on the vitality of this remnant.

Have Australia and New Zealand forfeited their occult birthright?

Certainly some of the ‘new people’ characterised by intuition and the powers of synthesis are found today in Australia, as well as in many other places throughout the world. The future depends on the ability of this remnant to impact the greater society and become a new Noah’s Ark capable of surviving the coming times of tribulation and transition. True, nearly every nation has a myth promising them a leading role in the dawn of a New Age. The universality of this myth in no way detracts from the responsibility it places on a people with ‘ears to hear’ the message of the times. Every people are called to turn within and align with the New Era. And Australasia is not impervious to this call, to this great Thought.

Over a century ago, in 1892, the Australian socialist and mystic William Lane wrote:

The brute-mother who would not be comforted because her young was taken gave birth in the end to the Christs who have surrendered all because the world sorrows. And we, in our yearning and our aspirations, in our longings and our strugglings and our miseries, may engender even in these later days a Christ whom the world will not crucify….12

The earth still awaits the revelation of the Christ people, the new humanity destined to carry out the great work in which we all have a part to play. At the end of his book, William Lane challenged his readers with words that speak to us today:

This article was published in New Dawn Special Issue 3.
If you appreciate this article, please consider a contribution to help maintain this website.

1. Nevill Drury and Gregory Tillet, Other Temples, Other Gods

3. Nevill Drury and Gregory Tillett, Other Temples, Other Gods

10. As quoted in Gregory Tillett, The Elder Brother: A Biography of Charles Webster Leadbeater