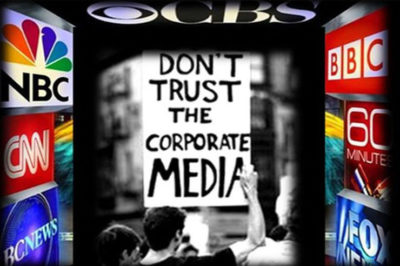 The Western mainstream media falsifies the news resorting to euphemisms, half-truths and lies in the best (worst) style of George Orwell’s novel 1984.

We all live in the unreal world of “Newspeak” used by the Global Power Elite to control our minds.

Man gets confused when things that happen around him and to him, or which are done in his name, cannot be properly grasped, understood or made sense of.

Normally, such confusion leads to inaction. If you’re lost at night in the middle of a forest but you can still see the stars, then a bit of astronomical knowledge will at least quickly tell you which way is north. But if it’s cloudy or you’re ignorant of the constellations in starry heaven, then you might as well light up a fire and do nothing until dawn…. You’re lost!

Today, mainstream media coverage uses programmed distortion, confusion, even outright lying when its Money Power masters order it to support the “official story” on any major political, economic or financial process. When looked at closely, however, the “official story” of things can be seen to be inaccurate, misleading, often hardly believable if not downright stupid.

Examples of this: Iraq’s nonexistent WMD’s leading to the invasion and destruction of that country; global mega-banker bail-outs with taxpayer money; irrational US diplomatic, military, financial and ideological alignment to Israeli objectives; “we-killed-Osama-Bin-Laden-and-dumped-his-body-into-the-sea”; and the wide array of “whodunits” surrounding 9/11 in New York and Washington, 7/7 in London, the AMIA/Israeli Embassy attacks in Buenos Aires in 1992/1994, and – of course – that all time favourite: who shot JFK…?

These are but a few of the paradigmatic cases that have at least served to trigger millions of people to wake up and think with their own minds instead of the mainstream media’s!

But, unfortunately, the vast majority of such cases are not so clear-cut. The vast majority of Newspeak lies are like knots, difficult to untie as they carry built-in complexity resembling Gordian Knots. And, as with all Gordian Knots, you need to cut right through them, and this requires swift and precise action plus a good measure of intellectual courage.

To give an example of what we say, let’s take a quick look at how a “Newspeak” operation works. It requires sequential planning, it requires time, it requires proper logistics, it requires “credible” spokespeople in public and private sectors, it requires choosing the right words and images at the right time and in the right circumstances.

So, let’s say the Global Power Elite – working through the governments of the US, UK, EU into which they are deeply embedded, and joint-venturing with a wide array of media outlets, defense companies, oil companies, security and construction companies, and powerful lobbies – decide that they wish to overrun and destroy a specific country…

How do they ensure that “the international community” will just quietly look on (except for the still relatively small minority of voices that are increasingly raising hell against them)?

Their keynotes are: Force and Hypocrisy, which they have used time and again to destroy entire countries, always in the name of “freedom,” “democracy,” “peace” and “human rights.” Utmost force and violence is used to achieve their ends and goals.

This article was published in New Dawn 134.
If you appreciate this article, please consider a contribution to help maintain this website.