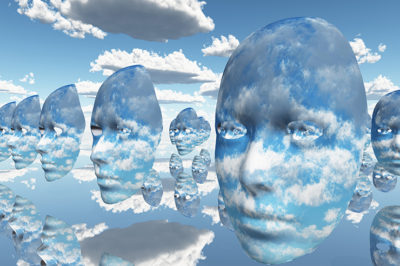 The idea that consciousness is evolving is one of the most important doctrines of the New Age. But is it true?

Over the long term, the answer seems obvious. Even the stupidest of humans is far more intelligent and sophisticated than a trilobite. Although materialists have skirted the conclusion that evolution has a direction – and that this direction is toward greater complexity – they have not managed to shoot it down.

The New Age idea of evolving consciousness is a little different. Many advocates of the new paradigm insist that human consciousness has gotten more sophisticated within historical times, and that it is destined to make another grand leap. It’s a harder case to argue.

It was H.P. Blavatsky, founder of the Theosophical Society, who first introduced the idea of evolving consciousness in the late nineteenth century. The basic theory of evolution as propounded by Darwin was already well known, but it had not been connected with consciousness in any important way.

In her magnum opus, The Secret Doctrine, Blavatsky made this connection. Indeed she went further. She held that not only humans and all organic life, but everything in the cosmos, down to the smallest atom, was perpetually evolving over the course of boundless eons toward a goal of unimaginable perfection.

Blavatsky was a bit more cautious about the evolution of human consciousness. While she propounded the allegedly ancient and secret doctrine of the Root Races, whereby humans would eventually develop supernatural capacities, she did not see this as coming any time soon. According to Blavatsky, the present, Fifth Root Race – encompassing practically all of humankind currently on earth – was going to be around for a while.

Nevertheless, Blavatsky set the stage, and it is interesting, though difficult, to try to figure out how much she influenced twentieth-century advocates of creative evolution such as Henri Bergson and Pierre Teilhard de Chardin.

The man who may be most responsible for the idea that human consciousness has evolved within historical times, and is making a transition to a new stage, is the Swiss philosopher Jean Gebser. In his masterwork, The Ever-Present Origin, published in 1949, Gebser outlined a development of civilisation in five stages: the archaic; the magic; the mythical; the mental; and the integral. Gebser’s argument is hard to summarise, but he essentially said that the shifts between these phases meant a change in human consciousness, even in how we view spatial dimensions. The “mythical” stage, the age of classical antiquity, was conceptually “spaceless.” The new “integral” consciousness is, by contrast, “space-free” and “time-free.”

Gebser’s arguments do not always hold up well. For example, he said that the dawn of the mental stage of development – which included the discovery of perspective in art – started in medieval times. A crucial moment was the Italian poet Petrarch’s ascent of Mount Ventoux in southern France in 1336. This, Gebser claimed, was the first time that anyone ever climbed a mountain solely to see the view. As such, it was “the discovery of landscape.” Unfortunately for Gebser’s theory, Petrarch himself said he had been inspired by the ascent of a mountain in Greece by King Philip of Macedon in the fourth century BCE. (Gebser tries, unconvincingly, to explain why Petrarch’s climb was so revolutionary and Philip’s was not.) Besides, perspective painting had been practiced in Greco-Roman antiquity.

Gebser is not well-known in the English-speaking world, but he has been very influential, largely through the works of the American philosopher Ken Wilber, whose “integral philosophy” was inspired by Gebser and by such figures as Arthur Koestler, Sri Aurobindo, and the American guru Adi Da (Franklin Jones).

If we want to decide whether consciousness is evolving and has evolved within living memory, it might be good to consider what consciousness is. For Gebser, it was “wakeful presence.” In my work, especially The Dice Game of Shiva, I have defined consciousness as the relation of self to other. To take a simple example, you are in your bedroom. You are awake. You see the furniture, the walls, the pictures. They are other, and you are you. Then you fall into a deep sleep. There is no longer a sense of self and other; you are no longer aware of your surroundings. You are unconscious.

What, then, is higher consciousness? What makes one kind of consciousness higher, or more evolved, than another?

In his book When Beliefs Fail: Toward a Psychology of Hope, Jim Stempel sets out a clear and engaging argument for the evolutionary perspective. He says: “The goal of spiritual growth is actually quite simple. It is complete awareness, the capacity to understand all of reality as well as ourselves…. Thus we enlarge our worldview until it incorporates everything.” To use the language of my theory, consciousness evolves as our view of the other, that is the world, expands.

Thus it would seem that consciousness has evolved. For a medieval peasant, the world was his village. The people in the village five or ten miles away were remote and menacing; they may as well have been extraterrestrials. Today we log into a computer and learn about places on the other side of the world in almost no time. Presto! Our worldview is enlarged. That means our consciousness is higher, more evolved.

But it is not so simple. In the first place, not everybody believes in these great strides in cognitive evolution. The twentieth-century French philosopher René Guénon, for example, argued that, far from evolving, we have devolved from an ancient state of pristine integrity. We are now living, Guénon said, in the “reign of quantity,” the last and most pathetic stage of the Hindu Kali Yuga, the Age of Darkness. Technological advancement, and the materialistic mentality that goes with it, is a symptom of this degeneracy.

Is Guénon wrong? Is it right to equate higher consciousness with technical sophistication and the expanded view of the world that results from it? As desperately as Western civilisation wants to believe this, it is not obvious, and it may not be true.

One counterexample is Tibet. The material culture of Tibet has always been primitive, even barbarous. It has no technological sophistication and has had no interest in developing it. Nevertheless, Tibet developed an extremely sophisticated and profound understanding of the nature of consciousness that the West is only now beginning to grasp. Can we say our consciousness is higher, more evolved, than the consciousness of Tibetans?

The twentieth-century spiritual teacher G.I. Gurdjieff also ridiculed the idea that the consciousness of modern humanity has evolved. His masterwork, All and Everything: Beelzebub’s Tale to His Grandson, one of the strangest and greatest books of the twentieth century, has as its stated objective “to destroy, mercilessly, without any compromises whatsoever, in the mentation and feelings of the reader, the beliefs and views, by centuries rooted in him, about everything existing in the world.” And one of the most important of these ideas to be rooted out is the delusory belief in progress. The 1,200 pages of Beelzebub argue that modern humans are not superior, but inferior, to those of ancient times, and material progress has hastened their deterioration.

Gurdjieff taught that modern man is in a state of waking sleep, a low-grade hypnosis. Part of this sleep involves dissociation: the body walks through its daily routines while the mind ponders grievances of the past, and fantasises about the future. We are like Mr. Duffy in one of James Joyce’s stories, who “lived a short distance from his body.”

Practically everything about present-day life helps increase this dissociation. You are well-informed about the latest world crisis, but are you aware of what is going on in your own being? Very likely your body and your emotions do not care in the slightest for all of the momentous events that make your mind so agitated. Probably, in fact, these other parts of you are bored by your fixation on a computer screen and would just as soon be out for a walk, or doing nothing at all.

So the grandiose claims of “evolution,” “integral consciousness,” and so on, do not stand up very well. Of course there are people today who have attained high states of consciousness, just like the mystics of old. But do we have any reason to believe they are any more common today than they ever were?

On the other hand, I myself have as much difficulty with the proclamations of degeneracy as I have with the proclamations of evolution. It is not so simple. It is never so simple. In many ways, humanity has advanced; in other ways it has regressed. While I think it is foolish to praise indigenous peoples as the repository of all wisdom, they often seem to have preserved inner powers and abilities that have been lost to trendy smartphone addicts.

As always, there are currents and countercurrents, and there is no good reason to single out one of these and proclaim it the inevitable wave of the future. We have already had too many inevitable waves of the future, and they have usually been dead ends. It is probably wrong to claim that humanity is retrogressing, but when someone launches into optimistic jabbering about “evolution” and the “new paradigm,” it may be well to think about these lines from the Tao Te Ching: “The ancient masters were subtle, mysterious, profound, responsive. The depth of their knowledge is unfathomable.” It is hard to say that about humans today.

This article was published in New Dawn 147.
If you appreciate this article, please consider a contribution to help maintain this website.