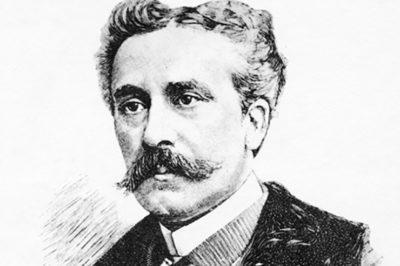 The French writer Alexandre Saint-Yves d’Alveydre (1842-1909) was an extraordinary figure, a strange mixture of occultist and political philosopher. Born into humble circumstances, he led an adventurous life before marrying the wealthy former Countess of Keller. After settling down in Paris he threw himself wholeheartedly into the study of ancient texts, languages and Eastern wisdom. Amassing an enormous library of rare books and manuscripts, Saint-Yves took lessons in Sanskrit, Hebrew and Arabic. His tutor was a mysterious Afghan who was known by the Muslim name Haji Sharif (or Hardjji Scharipf, 1838-?).1

His name may have been a pseudonym; he may have been an Afghan; some called him Prince… The manuscripts for which Hardjji [Haji] was responsible, now in the Library of the Sorbonne in Paris, show that he was a learned and punctilious teacher, and the source of two still unsolved enigmas: the holy land of Agarttha, and its sacred language of Vattanian.2

Haji Sharif, said Saint-Yves, was an “emissary” of “Agarttha” [Saint-Yves’ preferred spelling], the great initiatory centre in Central Asia presided over by a “Sovereign Pontiff” who “directs the entire life of the planet in a discreet and unseen way.” French researchers are convinced a shadowy group of Eastern initiates, who had been forced to flee their homeland for political reasons, contacted Saint-Yves in an effort to seed certain powerful ideas in the West. Saint-Yves also made an oblique reference to another Eastern guide, a “more serious” Guru who communicated to him the “secret teachings of the Brahmins.” Despite the ridicule heaped upon him by his numerous detractors, Saint-Yves steadfastly maintained that the highest officials of what he called the “Brahminical Church” had initiated him into the deep mysteries of Oriental wisdom.

In Western Christendom Jerusalem and often Rome are referred to as ‘Holy Cities’, ancient centres permeated with religious significance. Due to the notions imparted to him by his mysterious Asian teachers, Saint-Yves would come to be regarded as the leading exponent of the idea, then starting to gain attention in nineteenth century Europe, that the primordial Holy Land was concealed below the surface of the Earth somewhere in Central Asia. Protected from inquisitive, avaricious Westerners, the spiritual powerhouse of the planet was, Saint-Yves declared, the subterranean realm of Agarttha. Originally on the surface, Agarttha was transferred underground and concealed from humanity at the onset of the Kali Yuga in around 3200 BCE.

A focus on the regions of Central Asia as the ‘homeland’ of ancient wisdom was not in itself new. The Swedish savant Emmanuel Swedenborg asserted: “Henceforth it is among the sages of Tibet and Tartary that we must look for the Lost Word.” The Catholic mystic Anne-Catherine Emmerich had very clear visions of the “Mountain of the Prophets,” situated far beyond Tibet, where all true knowledge is preserved. The old legend of the “Wise Men from the East,” who were miraculously guided to the Christ child, may be a thinly disguised pointer to that Eastern spiritual centre from where emissaries are dispatched to the outer world. Saint-Yves assured his readers it is from Agarttha that such “divine envoys” as Orpheus, Moses, Jesus and many others have come “when humanity requires them.”

Modern day commentators on Agarttha, “that underground realm placed at the centre of the Earth, where the Lord of the World reigns,” conclude it is more or less symbolic. Some say it is primarily metaphorical, since the name “Agarttha” is itself said to mean “inaccessible” or “inviolable.” Agarttha is of no one country, of no one nation, but universal; the mysterious hierarchy of enlightened masters, gnostic magi, yogis and perfected adepts – headed by the Lord of the World – maintain subtle links with their emissaries in the outer world. “Agarttha is a faithful image of the eternal Word throughout all Creation,” wrote Saint-Yves.

There is an even greater mystery, that which the Asian doctrines call THE MYSTERY OF REFLECTIONS. This is what the Wisdom of Egypt put on the Emerald tablet: ‘As above, so below’. There is a strange harmony between the different levels of manifestation. Man has a sign that is found both on earth and in heaven. The Centre of transhuman power has indeed a reflection on earth; it is a constant tradition in Asia and this Centre (earthly? I do not know to what extent) is called, in Central Asia, Agartha. It also has other names that there is no need to include here. This Centre has as its mission, as its ‘raison d’être’, to lead the Earth’s spiritual activities. To do this it uses every possible means…3

Saint-Yves d’Alveydre also drew inspiration from the medieval Knights Templar, long held by occultists to have been Europe’s hidden rulers during the Middle Ages. He believed the Templars’ immense wealth and power came from their adherence to a socio-political system he termed Synarchy. For thousands of years Agarttha had “radiated” Synarchy to the upper world. Synarchy views society as a living organism like the human body. As Saint-Yves explained: “The first function corresponds to nutrition and that is economics. The second can be defined as the will, and that is legislation and politics. Finally, the third corresponds to the spirit and that includes science and religion.”

Synarchy, as Saint-Yves understands it, is the old dream of the meeting of left and right, of workers and capitalists, of scholars and priests, under the same banner and in the same spirit. It is already, in some way, the myth of the defence of the West against itself in face of the threat of Anarchy, or government without principles.

To Saint-Yves the Knights Templar, as faithful adherents of Synarchy, stood for universal peace, friendship between peoples, and co-operative federalism. With the demise of the Templar Order early in the fourteenth century, Europe strayed far from the path of Synarchy, succumbing to the forces of chaos and dissolution. As long as Europeans persisted in their chaotic, unprincipled government systems, Agarttha would remain closed to them.

While his enemies openly questioned his sanity, a small group of supporters hailed Saint-Yves as a gifted visionary. Jean Saunier remarked in his 1971 book La Synarchie:

Saint-Yves d’Alveydre was not such a strange author as one might believe. On the contrary, might he not appear to have been one of the last of the utopians of the nineteenth century?

The hugely influential French occultist and prolific author known as Papus (Dr. Gérard Encausse, 1865-1916) declared Saint-Yves d’Alveydre his “intellectual master.” Papus introduced the master’s books to members of the Russian Court and made his ideas well known in Russian mystical circles. But the master also had his own intimate connections with the Russian aristocracy through his wife’s family. In his book Mission de l’Inde, written in 1886, Saint-Yves noted approvingly:

The deeply religious sentiment of the Russian masses, their instinctive occultism, their language, their legends, their prophecies, and the Hermetic interpretation that some sects keep of the sacred scriptures, are all so many ties indicative of an intellectual and social alliance with Asia.4

He continued by urging Britain’s Queen Victoria to “craft an understanding between Your government and that of Russia.” With repeated references to benevolent Agarttha and the enlightened system of Synarchy, he criticised “the egotistical brutality that presides not only over the relations of Christian peoples with each other, but over the relations of their Colonial regime toward other continents and other communities of believers.” Saint-Yves saw Russia as the potential liberator of the Asian peoples from colonialism, writing in an open letter to the Russian Tsar:

Sire, have caution when touching Afghanistan and do not advance into the territory of these amphictyons without pronouncing the ancient password of the Kingdom of God… Then, if, in the regions of India, England does not bring about its downfall by establishing Synarchy, Providence will put wind in your sails, because marching in the footsteps of Ram, Sire, You will only have fought in the name of Christ and Saint Michael, the Solar Archangel, to redeem the peoples after having freed them.5

Expressing a thoroughly Eurasian outlook, Saint-Yves added: “The peoples of Central Asia feel great sympathy toward Russia and toward its sovereign.”

A decade later, in 1896, echoing his intellectual master, Papus sent a message to Nicholas II calling on the Russian tsar to “immortalise his Empire by its total union with Divine Providence.” By 1899 Papus was warmly received by the imperial family and established a lodge of his Martinist Order at the Russian Court in St Petersburg. The Martinist Order, with its strong emphasis on Christian mysticism, set itself in opposition to what Papus saw as the growing atheism and secularism of Freemasonry. Central to the inner teachings of Papus’ Martinist Order were the legend of Agarttha and the visionary writings of Alexandre Saint-Yves d’Alveydre.

Most secret societies and esoteric groups have, like the great world religions, a ‘founding myth’. A story imbued with sacred meaning, said to originate in the most ancient past and faithfully preserved down through the ages. In Freemasonry this is the legend of the building of King Solomon’s Temple. Today’s Rosicrucians claim a special connection to ancient Egypt. Many esoteric orders trace their origins to encounters with ‘other worldly’ entities. The Abrahamic faiths are full of seminal accounts of prophets instructed and empowered by heavenly emissaries and divine messengers. Asian secret societies also preserve detailed stories of their legendary heroic beginnings, usually connected to mysterious sacred centres. So it is no surprise that Agarttha, along with its complex socio-political system of Synarchy, became part of the mythos of certain powerful European secret societies.

After his death in 1909 the “Friends of Saint-Yves” assembled the master’s papers and took on the task of disseminating his many books. Foremost among these was the posthumous publication in 1910 of Mission de l’Inde (Mission of India) with its incredible revelations of the secret subterranean kingdom. In the 1920s, René Guénon cited Saint-Yves approvingly in Le Roi du Monde (The King of the World) a study of symbolism and myth. Other notable followers included Victor Blanchard, Nizier Anthelme Philippe, René A. Schwaller de Lubicz and Émile Dantinne.

Synarchy continued within the closed ranks of secret societies and esoteric study circles in France as well as abroad. Synarchy heavily influenced the development of Rudolf Steiner’s political thought and his ideas for social reform. Conspiracy researchers link Synarchy to a number of open political movements ranging from the 1930s leftist “X-Crise Club” to pro-Hitler Vichy France. Synarchy played a role in South American politics, particularly in Mexico. British writers Lynn Picknett and Clive Prince charge Synarchy with being the driving force behind the European Union.

As recently as 2011, hundreds of people were arrested or detained in Turkey on suspicion of involvement in a national revolutionary secret society known as “Ergenekon/Agartha.” Turkish authorities claimed “Agartha” members were planning a coup with the help of senior leaders in the country’s military and security forces.6

The fascinating Franco-Romanian novelist and esoteric researcher Jean Pârvulescu (1929-2010), who undertook a detailed study of the works of Saint-Yves d’Alveydre, suggested a secret brotherhood called “Agartha” existed in the Soviet Union’s special intelligence service, the GRU. According to Pârvulescu, the current Russian President Vladimir Putin is an envoy of this clandestine “Agartha” Order and is carrying forward their Eurasian plan.

In 2008 Inner Traditions published the first English language version of Saint-Yves d’Alveydre’s ‘Mission de l’Inde’ under the title The Kingdom of Agarttha: A Journey into the Hollow Earth (with an extensive Introduction by Prof. Joscelyn Godwin).
This article was published in New Dawn 151.
If you appreciate this article, please consider a contribution to help maintain this website.