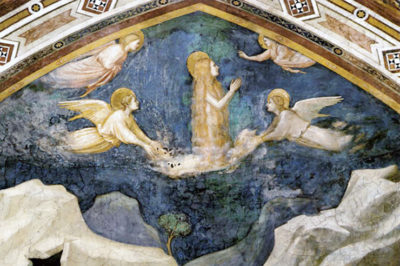 Of all the earliest followers of Christ, none has sparked the level of interest generated by one particular woman – the biblical figure known as Mary Magdalene. Revered as a saint, maligned as a prostitute, imagined as the literal bride of Christ, Mary of Magdala stands apart as an enigmatic individual about whom little is actually known, despite centuries of scholarly scrutiny and wild conjecture.

All that most Western Christians know about her is presented in the New Testament Gospels, and even that information is disputed. But there is some general agreement: She was a faithful disciple of Jesus Christ whom he had delivered from “evil spirits and infirmities.” Along with several other women, she ministered to Christ and witnessed his death on the Cross. She was there when his body was placed in the tomb, when the stone was rolled away to reveal an empty chamber, when an angel announced that Christ had risen from the dead – and when he made his first post-Resurrection appearance to the living. She brought the news of his Resurrection to the other disciples.

For 1,500 years, Mary Magdalene was portrayed, in art and theology, as a prostitute whose life was transformed by Jesus’ forgiveness. This notion, based on Luke 7:38, was the result of an erroneous sermon preached in 591 by Pope Gregory the Great. Noted French author Jean-Yves Leloup states that “only in 1969 did the Catholic Church officially repeal Gregory’s labeling of Mary Magdalene as a whore, thereby admitting their error.”

The stain of immorality attached to the figure of Mary Magdalene averted attention away from the significant role she plays in the unfolding of Christ’s teachings. The importance of Mary is especially apparent in Gnostic texts – some among the earliest accounts of Jesus’ ministry – which have been largely suppressed and ignored by Church authorities.

The Gnostic picture of Mary departs – in some ways, dramatically – from the historical and biblical image of perhaps the most significant female follower of Jesus.

The second-century Gospel of Mary was found in the late 19th century by archaeologists but remained largely ignored and untranslated for 50 years. It is the only account named for a woman and offers a different view of Christianity – one that describes an “interior spirituality,” says Karen L. King, author of The Gospel of Mary of Magdala: Jesus and the First Woman Apostle.

In the Mary Magdalene account, “salvation is not something that comes from an external saviour,” says King. “One has to seek salvation within.” Thus, the Magdalene gospel depicts Jesus as a teacher rather than as a saviour who dies to atone for humanity’s sins.

In her introduction in The Complete Gospels, King says:

…the Gospel of Mary communicates a vision that the world is passing away, not toward a new creation or a new world order, but toward the dissolution of an illusory chaos of suffering, death, and illegitimate domination. The Saviour has come so that each soul might discover its own true spiritual nature, its ‘root’ in the Good, and return to the place of eternal rest beyond the constraints of time, matter, and false morality.

Another Gnostic text – the Gospel of Thomas – reveals that women were disciples of Christ. However the New Testament only includes gospels written by men and distinguishes between the women of Christ’s life, and the ‘disciples’ – who are all male.

“You find in the [Gnostic] Gospel of Thomas that six disciples are named: Matthew and Thomas, James and Peter, Mary Magdalene and Salome,” says Prof. Elaine Pagels, professor of religion at Princeton University, and author of The Gnostic Gospels and Beyond Belief: The Secret Gospel of Thomas.

“Here, explicitly, Mary Magdalene is Jesus’ disciple. In the Gospel of Thomas and also the Gospel of Mary Magdalene, she is seen as an evangelist and a teacher, somebody who is gifted with revelations and teachings from Jesus which are very powerful and which enable her to be a spiritual inspiration to others.”

The Gnostics honoured equally the feminine and masculine aspects of nature, and Prof. Pagels argues Christian Gnostic women enjoyed a far greater degree of social and ecclesiastical equality than their orthodox sisters.

For Jean Yves-Leloup, the founder of the Institute of Other Civilisation Studies and the International College of Therapists, Mary Magdalene is the intimate friend of Jesus and the initiate who transmits his most subtle teachings.

His translation of the Gospel of Mary is presented in his book The Gospel of Mary Magdalene along with a commentary on the text which was discovered in 1896, nearly 50 years before the Gnostic Gospels at Nag Hammadi were found.

The Gospel of Mary can easily be divided into two parts. The first section (7,1-9,24) describes the dialogue between the risen Christ and the disciples. He answers their questions concerning matter and sin.

“Christ teaches that sin is not a problem of moral ignorance so much as a manifestation of imbalance of the soul,” says James Robinson, Professor Emeritus of Religion at Claremont Graduate University in The Nag Hammadi Library in English. “Christ then encourages the disciples to spread his teachings and warns them against those who teach of spirituality as an external concept rather than as an internal, Gnostic experience,” says Robinson.

After he departs, however, the disciples are grieved and in considerable doubt and consternation. Mary Magdalene comforts them and turns their hearts toward the Good and a consideration of Christ’s words.

The second section of the text (10,1-23; 15,1-19,2) contains a description by Mary of special revelation given to her by Christ. At Peter’s request, she tells the disciples about things that were hidden from them. The basis for her knowledge is a vision of the Lord and a private dialogue with Him. Unfortunately four pages of the text are missing here so only the beginning and end of Mary’s revelation are available.

This fragment of the gospel describes Mary’s vision of the soul’s ascent beyond the “powers” including the powers of fear. For the Gnostics, these “powers” are the Archons which act as cosmic prison wardens, attempting to prevent souls ascending to the True God. “It (the soul) has to overcome the powers of fear and the powers that threaten it as it proceeds into a life beyond death,” Prof. Elaine Pagels explains.

After Mary finishes recounting her vision to the disciples, Andrew and then Peter challenge her on two grounds. First of all, Andrew says, these teachings are strange. Secondly, Peter questions, would Christ really have told such things to a woman and kept them from the male disciples. Levi admonishes Peter for contending with the woman as against their adversaries and acknowledges that Christ loved her more than the other disciples. He entreats them to be ashamed, to put on the “perfect man”, and to go forth and preach as Christ had instructed them to do. They immediately go forth to preach and the text ends.

This confrontation between Mary and Peter is well documented in a number of Gnostic scriptures. Mary exposes the small mindedness and superficiality of Peter and Andrew who find it difficult to comprehend, let alone accept, the deeper spiritual understanding Mary acquired through her personal experience and closer relationship with Christ.

Indeed Peter and Andrew seem to prefer the very thing against which Christ warned them – a religion based on arbitrary ideas (in this case represented by Peter’s male chauvinism and Andrew’s ignorance). And yet many of their ideas have shaped modern Christianity while, paradoxically, Mary Magdalene’s spirituality, which here seems more consistent with the teachings of Christ, is unheard of today.


This article was published in New Dawn 84.
If you appreciate this article, please consider a contribution to help maintain this website.