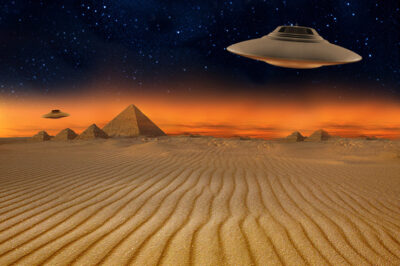 ‘Ancient Aliens’ is the title of a popular show running on the History Channel, now in its 12th season, but the same title was used on a book published in 1973 by Andrew Tomas. It followed his 1971 bestseller – We Are Not the First – just a couple of years after the English version of Eric Von Däniken’s Chariots of the Gods attained worldwide success. In fact, Tomas had published a book titled The Planetary Doctrine as far back as 1935. While the modern TV namesake ‘Ancient Aliens’ takes pains to promote the idea that extra-terrestrials are made of flesh and blood, probably in deference to scientifically minded viewers, Tomas had no qualms about presenting his aliens as being otherworldly supra-humans, consisting of what was described as ‘mind-born’ bodies.

Some readers may hold the view that, just like science and religion, Ufology and spirituality are mutually exclusive. Not so if Andrew Tomas is any guide. He entwined both belief systems into a single coherent strand that yielded his impassioned advocacy for world peace.

Born in Russia in 1906 and moving around as a result of his father’s work, Andrew left his homeland after the Bolshevik revolution and settled in China, where he completed his schooling and forged a career as an accountant. In 1948 he again fled social upheaval, this time when Mao Tse Tung forced the nationalists out of China. Tomas headed for Australia where he spent the best part of twenty years and dwelled successively in each of the mainland capitals. In the mid-1950s, at a time when he was involved in organising the NSW branch of the Australian Flying Saucer Research Society (AFSRS), he was viewed with suspicion by some other members and tarnished with the label ‘white Russian’.

Well known ufologist and author Bill Chalker has recorded his recollections of that era: “I am well aware of the paranoia that existed during those years, but I do believe that any suspicion of the Victorian and Sydney groups by any individual, or body, could not have been further from the reality. While it is true that Andrew Tomas was indeed Russian, along with George Tararin (who I believe was from the region now known as Belarus), Dr Lindtner (Slovenia) and Joseph Gjerki (Croatia) and for all I know, maybe a few others also from Iron Curtain countries, the fact is that these people had all gone to Australia to get away from that sort of thing. George used to tell me he was ‘stateless’, having come more or less the same route as Andrew, which is to say, by way or Harbin or Shanghai. The latter two men had been educated by Americans – they had rather quaint accents with strong American overtones!”1

The 1950s was the high point of McCarthyism in Australia, particularly with the Petrov affair. Unfortunately, even if you were not a communist sympathiser, the mentality of the era meant a ‘white Russian’ such as Andrew Tomas was probably under observation by intelligence agencies. This prompted him to request a name change from his Russian one, A. Boncza-Tomaszewski, under the ironically titled “Aliens Act 1947.” It was a further irony that Andrew Tomas should have drawn criticism because of his ethnic origins as he was a committed pacifist. Perhaps it was, in fact, his lobbying of politicians and other public figures with his peace agenda that drew attention. He had clung dearly to his Shambhala-inspired ‘peace doctrine’ ever since writing Planetary Doctrine two decades earlier.

In 1954 Andrew Tomas met mystery writer Edgar Jarrold, the director of Australia’s first public flying saucer group. Tomas showed Jarrold his 1935 book The Planetary Doctrine, which had been published in Shanghai, China. He focused Jarrold’s attention on the passage: “Travellers and explorers often notice in the heights of the Himalayas strange shiny objects or creatures soaring high above the mountain crests, which are an eternal puzzle to Europeans. Whether these mysterious objects are vehicles belonging to supermen we dare not assert, though such an explanation is quite plausible. Cannot the reader believe that by such means, utilising unknown energies, communication is maintained from planet to planet?”2

The book Shambhala: Oasis of Light, written in 1977, was arguably Tomas’ most insightful and enduring legacy. In it, he describes how he ascended the snowy Himalayan slopes to a Tibetan monastery where he received spoken wisdom from a learned Lama, along with non-verbal illumination during a privileged initiation in a secret cave below the temple. Not only does Tomas assert the reality of the Bodhisattvas and Arhats, or Mahatmas, in this work he also draws together timeless mysteries from the East and West, Buddha and Jesus, Essenes and Templars, Hindu and ancient Greek; he connects Rosicrucianism, Masonry and Theosophy; the teachings of ancient philosophers flows through to unseen Guardians who continue to guide the planet today.

He first met Nicholas Roerich in Shanghai during 1935 (the same year Tomas published The Planetary Doctrine). Roerich had just completed an expedition to Central Asia and talked about beings he called ‘Guardians’ who dwelt in the Gobi Desert. From that time onwards, Tomas would refer to Roerich reverently as his Master. For those unfamiliar with Roerich (1874–1947), he was a Russian painter, writer, archaeologist and theosophist, perceived as an ‘enlightener’, philosopher, and public figure, who in his youth was influenced by a spiritual movement in Russian society.

Trained as an artist and a lawyer, Nicholas Roerich was a dedicated activist for the cause of preserving art and architecture during times of war, earning several nominations for the Nobel Peace Prize. Among his most notable achievements was the Roerich Pact,3 which was signed into law by the United States and most nations of the Pan-American Union in April 1935. Andrew Tomas went on to devise a pact of his own. In March 1958, as secretary and organiser of the International Organising Committee of the Planetary Pact, he sent a draft of the pact to the world’s leading news agencies.

Two years prior he published a 48-page booklet in Sydney titled Signs, Stars and Seers – An Experiment in Historical Prediction. In this book he stated he had already issued unheeded warnings to Hitler, Mussolini and Hirohito, through their embassies in China in 1935, regarding the folly of war. He also claimed to have approached a “responsible Soviet diplomat” four months after the defeat of Japan – well before the Cold War – with a project aimed at establishing friendly cultural relations between the USSR and the USA & UK. Although the project was not adopted, Tomas felt that his mission on behalf of world peace had been fulfilled. The booklet contained the ominous admonition: “If the national governments ignore this last warning, motivated by a desire to save this planet from destruction and mankind from self-annihilation, they will have to bear all responsibility for opposing the Cosmic Law of Unity.”4

Not much was known in the West about the legendary Shambhala until revelations were made by Madame H.P. Blavatsky in the late nineteenth century. Andrew Tomas presented impressive evidence from Tibetan sources that this hidden kingdom really does exist and is the home base of higher beings who continue to guide us into the coming new age of Homo Noeticus. In that regard he issued warnings of coming calamities, while at the same time holding optimism for our long-term future. We will conclude with two of his predictions, one coming from his ‘Cosmic ET friends’, and the other from his Tibetan guides.

At the end of an article in the last issue of Jarrold’s Australian Flying Saucer Magazine, “Are you ready for a planetary crash?”, (page 7, February 1955), he wrote: “In the circles of the duly initiated Brethren of Space, fantastic stories are told of saucers, messages from space and cosmic decrees.… Anyway, my cosmic friends tell me not to worry about what other people say, but just place this information before the public. ‘It won’t be long now’, they say. Jokes aside, let us think more of the stars. Let us all become the children of Heaven. Let us dream of a Utopia where there is no hatred and no wars. But before we see that Utopia a red sign will flash in the skies, ‘Tighten your belts’. As Ripley says, ‘believe it or not’, but we are heading for a planetary crash.”5

And finally, at the close of his book Shambhala: Oasis of Light, Andrew left us with predictions from the Tibetan Kalachakra tradition:

“The twenty-first Ruler of the Land of Shambhala, Ma-gag-pa, is now enthroned on his lion-supported golden throne. He has ruled for forty-nine years before the present Fire Dragon year (1976). After another fifty-one years (2027), the twenty-second Holder of castes, Mi-yi Seng-ge, will ascend the throne and rule for one hundred years…

“The twenty-fifth Holder of castes, Drag-po K’or-lo-chan, will ascend Shambhala’s golden lion-supported throne in the Fire Sheep year of the twenty-second cycle (twenty-fifth century) and propagate the Dharma teachings…

“The La-lo king… will gather his legions west of India in a place called Tri-li… then the ministers will conduct an air surveillance. When they see numerous signs of wealth and happiness in the Land of Shambhala in the north, their jealousy will have no bounds and they will attack Shambhala. This will be in the Water Sheep year of the twenty-second cycle (2425)…

“The Ruler of Shambhala will then assume command of the assembled forces of the twelve great gods – of the skyships flying faster than sound, fire- and steam-powered vehicles, armoured chariots, as well as the different types of atomic weapons…

Tomas notes that these words were written down many centuries before the discovery of steam, aviation, nuclear physics or astronautics. He ends with these words:

“Thus the evil forces will be destroyed by the might of the twelve gods. After that the precious Dharma will come under the direct protection of the Buddha. The King of Shambhala will change his residence and then the Perfect Age will dawn anew.”6

This article was published in New Dawn Special Issue Vol 12 No 2.
If you appreciate this article, please consider a contribution to help maintain this website.

3. For more on the Roerich Pact, see en.wikipedia.org/wiki/Roerich_Pact

Andrew Tomas, Mirage of the Ages: A Critique of Christianity, Exposition Pr of Florida, 1983

Andrew Tomas, On the Shores of Endless Worlds – The Search for Cosmic Life, Bantam Books, 1974

Andrew Tomas, The Home of the Gods: Atlantis from Legend to Discovery, Robert Hale & Co., 1972

Andrew Tomas, We are Not the First: Riddles of Ancient Science, GP Putnam’s, 1971