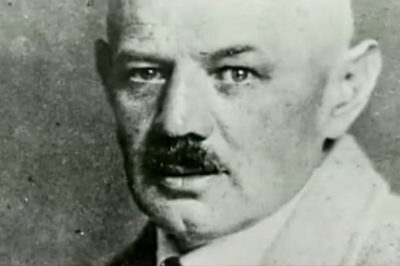 Follow Hitler. He will dance, but it is I who have written the music.… Don’t weep for me: I shall have had more influence on the course of history than any other German.
– Dietrich Eckhart, on his deathbed, Christmas 1923

Dietrich Eckart (1868-1923) was a prominent figure in Germany’s bohemian and occult subculture before World War I. A well-known playwright, poet and journalist, he was involved with the shadowy Baron Rudolf von Sebottendorff and the secretive Thule Society in Munich.

After hearing Adolf Hitler speak at a political meeting in 1919, Eckart recognised Hitler’s talent as a demagogue and an organiser. He saw in Hitler someone who could translate the occult worldview of the Thule into action. He quickly took Adolf Hitler under his wing and made him his protégé.

Eckart popularised a central tenet of the Thule Society, the belief in the coming of a “German Messiah” who would redeem the nation from its defeat in World War I. Eckart expressed his anticipation in a poem he wrote months before he first met Hitler. In the poem, Eckart refers to ‘the Great One’, ‘the Nameless One’, ‘Whom all can sense but no one saw’. When Eckart met Hitler, Eckart was convinced that he had encountered the prophesied saviour.

Eckart introduced Hitler to Capt. Ernst Rohm, who had important links to senior officers in the German army. Rohm, an open homosexual later murdered on Hitler’s orders, headed up the Thule Society’s military wing. Other Thule initiates Eckart introduced to Hitler included Rudolf Hess (who would become Hitler’s deputy) and Alfred Rosenberg (later to play an important role in the Third Reich).

Significantly, Eckart provided Hitler with funds and supported him in his rise within the German Workers’ Party (DAP), the Thule Society’s political front group. Eckart had been one of the founders of the party which Hitler quickly transformed into the National Socialist German Workers’ Party (NSDAP). He was the original publisher of the party tabloid, the Völkischer Beobachter, a Munich newspaper first bought by Rudolf von Sebottendorff in the name of the Thule Society. Eckart also wrote the lyrics of the quasi-mystical Nazi anthem “Germany Awake.”

Historians agree that Eckart exerted considerable – and unequalled – influence on Hitler. Without his patronage the young Austrian veteran would never have become the leader of the party that came to completely dominate Germany in the 1930s.

Under Eckart’s guidance Hitler was first made into a political Führer. His 1921 article was in fact the first to describe Hitler as the “Führer” of the German people. He put his library at Hitler’s disposal and taught him to express himself more articulately.

Eckart is credited with helping Hitler develop his almost hypnotic power of oratory. As Professor Alan Bullock observed in Hitler: A Study in Tyranny: “Hitler’s power to bewitch an audience has been likened to the occult arts of the African medicine-man or to the Asiatic shaman; others have compared it to the sensitivity of a medium and the magnetism of a hypnotist.”

So who was Dietrich Eckart?

Eckart has been called “a seeker of other realities,” regarded by some as a mystic and a seer. No ordinary political journalist, one biographer noted:

Dietrich Eckart was never a politician in the usual sense. As a politician he remained – as he did a poet – a seer of essentials, and from this standpoint he passed judgement on men and events. With the politics of everyday and their advancement, with practical Realpolitik and its hypocrisy and readiness to compromise, he had nothing to do. (Adolf Dresler, Dietrich Eckart, 1938)

Addicted to morphine for much of his life and suffering from alcoholism in his later years, Eckart was described by the American journalist Edgar Ansel Mowrer as “a strange drunken genius.” His friend Alfred Rosenberg wrote of him: “Without the sweet poison [of morphine] he could not live… Eventually he was taking daily measures from which a normal man, not possessed of such bear-like strength, would have died.”

An incurable romantic, Dietrich Eckart saw himself as following in the tradition of the great German thinkers Heinrich Heine, Arthur Schopenhauer and Angelus Silesius. He was also well acquainted with Buddhism and the lore of ancient India.

However, according to James Webb, author of The Occult Establishment, “the basis of Eckart’s doctrine was Christian mysticism. Man must free himself from the world and deny the supremacy of matter, which is illusion. Only death will break the spell under which humanity labours.”

The German historian Steigmann-Gall concludes that, “far from advocating a paganism or anti-Christian religion, Eckart held that, in Germany’s post-war tailspin, Christ was a leader to be emulated.”

The British author Trevor Ravenscroft in his sensationalist best-selling book The Spear of Destiny describes Eckart as the “Master-Adept” responsible for Hitler’s rise from obscurity to absolute power. “Dietrich Eckart,” says Ravenscroft, “contrived to open the centres in the astral body of Adolf Hitler, giving him the possibility of vision into the macrocosm and a means of communication with the Powers.”

The French writers Pauwels and Bergier in their Morning of the Magicians also single out Dietrich Eckart as Hitler’s occult master. They claim that Eckart’s role as an occult counsellor was related explicitly to invisible hierarchies.

Thule was thought to have been the magic centre of a vanished civilisation. Eckardt [sic] and his friends believed that not all the secrets of Thule had perished. Beings intermediate between Man and other intelligent beings from Beyond, would place at the disposal of the Initiates [i.e. the members of the Thule Society] a reservoir of forces which could be drawn on to enable Germany to dominate the world … [its] leaders would be men who knew everything, deriving their strength from the very fountain-head of energy and guided by the Great Ones of the Ancient World.

Researchers of the occult, as well as some spiritual teachers, have long concluded Adolf Hitler was a vehicle for other forces. Something or someone else was behind him. Was Dietrich Eckart the vital link between Hitler and those Powers? After Eckart’s death in 1923, Hitler deliberately attempted to conceal his immense debt to the Thule. Once in control of Germany, he ordered the ruthless suppression of all occult organisations and esoteric teachings.

After a few years as pupil of the master Eckart, Hitler embarked on his own ‘independent’ path. From the mid-1920s, Adolf Hitler felt he had outgrown the occultist milieu, and was now solely dependent on “Providence” to guide him to victory. In Mein Kampf, Hitler’s contemptuous attack on ‘wandering scholars’ showed his disdain for the conspiratorial secret society approach of groups like the Thule Society.

Eckart’s influence waned with Hitler’s growing renown and self-confidence. The original vision of the Thule was sacrificed in the brutal and bloody struggle for power and control. However, up to his death in 1945, Hitler continued to hold Dietrich Eckhart in high regard. He dedicated the second volume of Mein Kampf to his deceased mentor.

The controversial Indian guru Osho (formerly known as Bhagwan Shree Rajneesh) declared “Hitler was used by an esoteric group” and “the entire concept of Hitler’s philosophy was given by some hidden schools.” Osho believed that once Hitler became ‘independent’ he began to go down. Osho claimed:

Who was behind this? Some esoteric group was behind this, and that esoteric group was trying something. When Hitler became independent, he lost every power. In his last days, he was just ordinary. After this particular moment, when he lost contact, whatsoever he did went against him. Before this, whatsoever he did was always in his favour. (I Am The Gate)

Historians have yet to fully uncover the complex underground of German secret societies and occult traditions from which the Nazi Party emerged early last century. When they do, Dietrich Eckart will surely be revealed as the occult mage who conjured Adolf Hitler.


This article was published in New Dawn Special Issue Vol 7 No 3.
If you appreciate this article, please consider a contribution to help maintain this website.