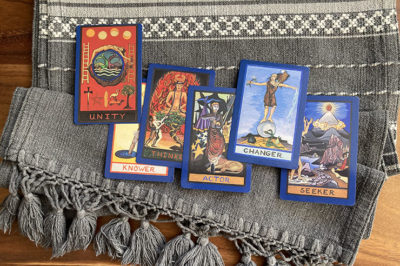 The Tarot is a path. In Egypt it was called the Books of Life or Books of Thoth and also the Royal Way of Life. The word Tarot was derived from the Egyptian words Tar, meaning path or way, and ro, ros or rob, meaning royal – hence: The Royal Way of Life. And the Books of Life, used in connection with initiation ceremonies, were quite literally the Books of a path of initiation, and its 22 symbols or pictograms were like the words of a sentence adding up to a single meaning. Or they could have been compared to steps upon the way or beads upon a string. They were to be understood singly but also as a whole, a totality, and in relationship to each other.

It is said that the candidate for initiation in the Egyptian mysteries had to pass between paired rows of Tarot symbols inscribed in hieroglyphs on huge tablets of stone and signify his understanding of them before he could be accepted. The symbol T also stands for an initiate; and in early times initiates were know as T’s.

It is possible that the original Books of Thoth contained a secret describing a very specific and literal pathway or method by which the initiate might attain realisation.

The Egyptian Books of T were not cards at all but mighty Books embodying cosmic principles. The authorship of the Books of Life was ascribed to Thoth-Tehuti, the scribe of the gods and one of the oldest of the gods who, by tradition, came from Atlan – or Atlantis, the Land of Atlan. Thoth may have been an historical personage. It is believed that he established a colony in Egypt before Atlantis went down. If so, this would place his date at around 10,000 BCE, at about the time of the final submergence of Atlantis, according to Plato’s account.

In his Tehuti aspect, he invented the alphabet, and it is he, along with Osiris, who weighs the heart in the Egyptian Book of the Dead. He is ibis-headed; his symbol is a feather; and he is associated with Truth.

No one has seen the originals of the Books of Thoth. The present day Tarot of the Bohemians, or gypsy pack, used as a fortune-telling deck, is a descendant of the originals but has undergone many alterations in form and symbols as it has been rendered by countless artists. Madame Blavatsky said that the originals of the Tarot were stored in Mesopotamia in cylinder seals of copper and would one day be found. However, their historical origin can never be established, and it is possible that we will never know whether they were written by the legendary Thoth-Tehuti or whether they sprang from an earlier source. But their historical origin is, in the present consideration, beside the point.

During the Middle Ages, the Tarot was carried to Europe, some say by the Knights Templar, others by the gypsies. The gypsies, according to one account, were the descendants of Egyptian priests who rescued the Books of Thoth, also called the Tora, from the burning library at Alexandria; and the gypsies may easily have been Egyptians as the very word gypsy suggests. In the 14th and 15th centuries, the Tarot appeared in the guise of a playing card deck, also as a fortune-telling deck with the addition of the 56 cards of the minor arcane, or the four suits – wands, swords, cups and pentacles – which are the foundation of all modern playing card decks.

The medieval Tarot deck of 78 cards has survived until the present as a fortune-telling pack, and appears in numerous popular versions. While this preserved the original 22 Tarot symbols, or major Arcanum, which otherwise would have been lost, it obscured their real meaning. Their sacred purpose was forgotten and few realised that they described a path or that they contained a teaching, a way of life.

Although the Kabbalists found and stressed an esoteric meaning in the cards, relating them to the ten Sephiroth on the Kabbalist Tree of Life and the Hebrew letters, this was overshadowed by their use as a fortune-telling deck, and the cards came to be thought of chiefly as a means of predicting the future, with mundane and literal meanings ascribed to each card.

The Tarot symbols are archetypal symbols of man’s unconscious and represent the enfoldment of his unconscious. They are, therefore, his built-in destiny for any given time period. They are directly linked with cosmic principles and for this reason are predictive on a grand scale. For that which is within is expressed without. Even as the seed contains the tree, that which the unconscious contains is outed and fulfilled externally. Destiny is internal. What is inherent in the times, in the unconscious of man, becomes the time itself. This is another way of saying that man is his own Fate, and that he writes his Destiny, or the Tarot.

The above is abridged from T: The New Tarot, The Tarot for the Aquarian Age by John Starr Cooke and Rosalind Sharpe (Western Star Press, 1968).

The full story about the Book of T or the New Tarot for the Aquarian Age, can be read in New Dawn 145, “ONE: The New Tarot & the Secret Doctrine that Launched the Counterculture” by Mark Walker, and also see the websites www.royalmaze.com and www.tarot.one.

This article was published in New Dawn Special Issue Vol 13 No 5.
If you appreciate this article, please consider a contribution to help maintain this website.