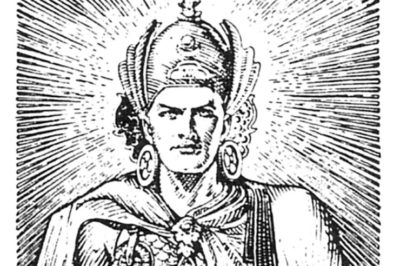 The King of the World

One of the world’s oldest legends tells of a vast underground network of tunnels and passageways connecting the great continents of the earth to a subterranean realm somewhere beneath the heart of Central Asia.

“Among the Mongolian tribes of Inner Mongolia,” claimed the British journalist H. T. Wilkins, “there are traditions about tunnels and subterranean worlds which sound as fantastic as anything in modern novels. One legend – if it be that – says that the tunnels lead to a subterranean world of Antediluvian descent somewhere in a recess of Afghanistan, or in the region of the Hindu Kush. It is Shangri-La where science and the arts, never threatened by world wars, develop peacefully, among a race of vast knowledge. It is even given a name: Agharti.”

In The Mysterious Unknown, the French writer Robert Charroux, drawing on the Ancient Wisdom, describes Agharti as “a mysterious subterranean kingdom that is said to lie under the Himalayas and where all the Great Initiators and the Masters of the World in the present cycle are still living. Agharti is an initiatory centre…”

‘Agharti’, also rendered ‘Agarttha’ and sometimes ‘Agartha’, owes its popularity to the 1920s best-selling book Beasts, Men and Gods. Written by the Polish academic and explorer Dr. Ferdinand Ossendowski (1876–1945), it is a chronicle of his adventures in Central Asia in the tumultuous years following the Russian Revolution.

What makes Ossendowski’s account unique is his claim that everywhere he went in Central Asia he encountered the shadowy legend of “The King of the World” – reigning over the subterranean power-centre of Agharti – who “knows all the forces of the world and reads all the souls of humankind and the great book of their destiny.” This unseen ruler of the planet and his council of Masters wield telepathic influence over persons in our ‘outer’ world. Often visiting disciples in their dreams, they send forth messengers at fortuitous times to confer with their agents, scattered among the nations.

Occasionally, the King of the World came out in person. He would visit some holy place, arriving and leaving mysteriously. He had done so at a temple in the Mongolian town of Narabanchi in the winter of 1890/91.

A Prophecy for Today?

“More and more the people will forget their souls and care about their bodies. The greatest sin and corruption will reign on this earth. People will become as ferocious animals, thirsting for the blood and death of their brothers. The ‘Crescent’ will grow dim and its followers will descend into beggary and ceaseless war. Its conquerors will be stricken by the sun but will not progress upward and twice they will be visited with the heaviest misfortune, which will end in insult before the eye of the other peoples. The crowns of kings, great and small, will fall… one, two, three, four, five, six, seven, eight… There will be a terrible battle among all the peoples. The seas will become red… the earth and the bottom of the seas will be strewn with bones… kingdoms will be scattered…whole peoples will die… hunger, disease, crimes unknown to the law, never before seen in the world.

“The enemies of God and of the Divine Spirit in man will come. Those who take the hand of another shall also perish. The forgotten and pursued shall rise and hold the attention of the whole world. There will be fogs and storms. Bare mountains shall suddenly be covered with forests. Earthquakes will come… Millions will change the fetters of slavery and humiliation for hunger, disease and death. The ancient roads will be covered with crowds wandering from one place to another. The greatest and most beautiful cities shall perish in fire… one, two, three… Father shall rise against son, brother against brother and mother against daughter…. Vice, crime and the destruction of body and soul shall follow…. Families shall be scattered…. Truth and love shall disappear…. From ten thousand men one shall remain; he shall be nude and mad and without force and the knowledge to build him a house and find his food…. He will howl as the raging wolf, devour dead bodies, bite his own flesh and challenge God to fight…. All the earth will be emptied. God will turn away from it and over it there will be only night and death.

“In the fiftieth year only three great kingdoms will appear, which will exist happily seventy-one years. Afterwards there will be eighteen years of war and destruction. Then the peoples of Agharti will come up from their subterranean caverns to the surface of the earth.”

“Afterwards, as I travelled farther through Eastern Mongolia and to Peking, I often thought: ‘And what if…? What if whole peoples of different colours, faiths and tribes should begin their migration toward the West?’”

After again quoting the Buddhist lama, Ossendowski ends his book: “Karma may have opened a new page of history! And what if the King of the World be with them? But this greatest Mystery of Mysteries keeps its own deep silence.”

If we accept that the mysterious King made this prediction in the winter of 1890/91, as Ossendowski was told, then the 50 years of strife and misery (marked by the First World War, the end of the European monarchies, revolutions, famine, disease, class/ethnic/religious conflicts, the financial chaos of the Great Depression) would take us through to the years of the Second World War. This followed by 71 years of happy stability under three great kingdoms (perhaps a reference to the East-West stand off at the end of 1945). Bringing us remarkably close to 2012, a year made famous by its association with the supposed end of the Mayan calendar. Then commences 18 years of war.

Many modern day commentators believe we’re in the initial stage of a long ‘war’, with the Anglo-Americans and the Western alliance locked in a new kind of ‘asymmetric warfare’ with Russia, China and their allies in the global South. Others, notably American politicians, see an endless ‘War on Terror’ as currently underway between the West and radical Islam. The culmination of this 18-year period of global conflict brings us to the years 2029-2030. This is when the people of the “subterranean” realm will come “to the surface of the earth,” making their existence known to all.

Leaving aside the esoteric and mystical symbolism implicit in the Agharti mythos, some further observations are worth making. As we approach the year 2029, the date prefigured in the King of the World’s prophecy delivered in 1890/91, we look back on a century of bloodshed and misery unprecedented in history. World wars, genocides, social and political upheavals, ecological crisis, economic instability, are only some of the terrible catastrophes to befall mankind in the last hundred years.

Against this background, some contemporary visionaries see the wars in Iraq and Afghanistan, threats against Iran, even the destabilisation of the Chinese province of Xinjiang, as part of the working out of an ancient plan. Added to all this is the spectacular rise of the peoples of Asia. A great awakening is quietly underway in Central Asia, fuelled in large part by China’s grand scheme to re-establish the ancient Silk Road. Will we see the dawn of a powerful Great Eurasian confederation by 2029? Many expect so.

“I shall die! But no matter, no matter… The cause has been launched and shall not die… The tribes of Jenghiz Khan’s successors are awakened… In Asia there will be a great state from the Pacific and Indian Oceans to the shores of the Volga… It will be the victory of the spirit.”

Is this the ‘victory of the spirit’ for which certain Eastern mystics and their allies in the Eastern-orientated occult circles in the West have long been labouring in secret? For at least the last one hundred years a select few Western occultists have known that the rise of Asia was near and inevitable. Back in 1888, Madame H. P. Blavatsky, who spoke openly of being guided by ‘The Masters of the East’, predicted an inevitable show down between East and West:

“Then, perhaps, there will be a new invasion of an Atilla from the far East. One day the millions of China and Mongolia, heathen and Mussulman, furnished with every murderous weapon invented by civilisation, and forced upon the Celestial of the East, by the infernal spirit of trade and love of lucre of the West, drilled, moreover, to perfection by Christian man-slayers – will pour into and invade decaying Europe like an irrepressible torrent.”

Secretive mystic-politico groups, known to history by various and sundry names: the ‘Grand Lodge of Vril’, the ‘Order of the Green Dragon’, ‘Society of Green Men’, ‘Black Dragon Society’, ‘Han Temple of Buddha-Shakti’… Claiming a link with Agharti, these have all worked quietly in the shadows to lay the foundations for a sort of fraternal union between Eastern and Western occultists. In a document issued by one of these occult orders, we’re informed:

The Master of the Three Worlds, whose initials are K.R.T.K.M, reigns over a community of Magi… The next Buddha will come from the North, and will be the Kalki-avatar of the Hindus, or Kundaliniavatar, who will wear on his finger the metal ring of Genghis Khan. His coming will mark the return of the Golden Age, and will precede the advent of the luminous race, contemporary with the resurrection of Mu or Tao-Land.

It will be the end of the Kali Yuga, the casting out of the Jotün and the cacodamons from the governmental centres of the earth, and of 100,000 years of evil karma inherited from the darkness of Atlantis.

Here we have hints of a link between the King of the World’s prophecy and the end of the Kali Yuga. A connection that did not escape the attention of French esotericist Rene Guenon (1886–1951) who wrote his own study of the King of the World, Le Roi du Monde, in 1927. Guenon was also interested in the work of scholar Gaston Georgel who claimed, based on his extensive research, that the end of the Kali Yuga would come in the northern hemisphere winter of 2029/2030.

Time, as they say, will tell.

This article was published in New Dawn Special Issue Vol 11 No 3.
If you appreciate this article, please consider a contribution to help maintain this website.