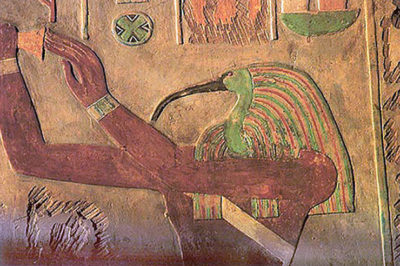 A question frequently put to me by newcomers to magical practice is whether there is a reliable way of distinguishing subjective experience from what exists independently of their perception of it. In other words, how can they be sure that what they witness during a particular ritual, even when it impinges on their surroundings, is something other than the product of their own – or the group’s – creative imagination.

It is a question some magical orders are reluctant to answer or at times even deign to consider. In them may lurk the fear that once they acknowledge the subjective nature of any phenomena associated with their work, that immediately devalues it. And the new recruit, persuaded it’s all in the mind, may then drift away.

After all, if you’re after mental magic, it’s far less hassle (and a lot more fun!) to watch Derren Brown strut his stuff than spend hours in an airless, incense-filled room, sporting fancy dress and mouthing incantations.

Or perhaps the question is avoided because it can never be satisfactorily answered, if only because, as with much else in occultism, there is no clear-cut answer to be had.

For even if the imposing figure of, let us suppose, a venerable Druid were to turn up during a rite associated with the Celtic mysteries, his appearance, while seeming to be objectively real, might nevertheless be the projection of an image inside the leading celebrant’s head and telepathically conveyed to everyone else.

On the other hand the selfsame figure might well be the real thing, an inhabitant not (or no longer) of our three-dimensional world but briefly granted access to it thanks to our magical efforts. So not surprisingly, when asked by a student how to distinguish which of the two he is, I’ve often been hard put to answer.

A further complication is that entities – and let’s stick to these for now, though ritual can generate a variety of other phenomena – which are the constructs of the human mind can, once created, assume a life of their own. Well, perhaps ‘life’ is not the right word for what they enjoy is, strictly speaking, only a similitude of life, since they are of synthetic origin and, as such, animated by the vital energy they draw from living beings. To that extent theirs is what might be called a vampiric existence.

Dion Fortune spoke of such entities several times, having by her own, perhaps obsessive, account been the unwilling recipient of their attentions. And by coincidence it was her husband, T. Penry Evans, then married to his second (and not at all occult minded) wife, Anne, who first talked to me about them.1

Not yet in my teens, I had been introduced to magic and encountered – the details are unimportant – an entity whose nature and intentions he thought it prudent to investigate. For him there were two questions to be answered: had the entity been visualised beforehand by me (or suggested to me by my then mentor, a friend of both Dr. Evans and my father); and would it return permanently to where it had come from after being ritually banished. The answer to the first was no and the second, happily, turned out to be yes.

To Dr. Evans this demonstrated that the entity was not mentally connected to me in any integral way. It had, in other words, an independent life of its own and so, to return to where we started, was objectively real and not the product of human imagining.

Contrast this with the tulku created by the well-known explorer Mme. Alexandra David-Neel. In her book, With Mystics and Magicians in Tibet she describes how during her time in that country she set about creating from her thoughts a fat and jolly monk who, initially at least, was content to do her bidding. Others in her group could see him and he even performed small chores when requested.

But over time his appearance coarsened and his demeanour became less benign, so much so that his alarmed creator resolved to put an end to the experiment. It was no good attempting to banish him, as was successfully done in my case, because the creature had emerged from – and been sustained by – her own self.

She had no choice but to re-absorb it into her ethero-astral bodies, exactly as Dion Fortune claimed to have done on one occasion when she involuntarily created a version of Fenris, the wolf–fiend of Norse mythology. According to both women the process is extremely distressing.2

These induced thought forms are, I suspect, the correct explanation for those materialised spirits – a contradiction in terms but never mind – that used to be a feature of spiritualist seances. Or at least of those seances where the apparitions on display were not fabricated from regurgitated cheese-cloth or masticated lavatory paper. (It is noteworthy that the sudden decline in this kind of seance coincided with the invention of infra-red equipment and miniature cameras capable of taking pictures in the dark.)

That genuine materialisation did occur from time to time is, however, likely. One of my compatriots, Jack Webber, was especially prolific, as was – on those occasions when she didn’t cheat – the eminent Scottish medium, Helen Duncan. (I attended one of her seances as a small boy while staying with an eccentric aunt in South Wales but that story belongs elsewhere.)

I am satisfied that in seances of this kind, the phantoms that used to turn up and, it must be said, were identified as true likenesses of their dear departed by those attending the performance, were in fact their own thoughts exteriorised in a way similar to what occurs in magical operations.3

The difference, however, is that in the latter everything is structured and deliberate, as well as under strict control. And the forms themselves are more subtly built, requiring nothing so crude as the ectoplasm extruded by mediums from their bodies. (Only in a rarely attempted and extremely intimate operation, one I have been privileged to witness, might a substance resembling ectoplasm be involved. I refer here to the creation of a so-called magical child.)4

Anyway the point I am making is that in trying to decide what is objectively real per se and what, though apparently real, is mind-generated and essentially dependent on its creator, the Penry Evans test seems to me valid. And since first learning of it many years ago, I have come across another of my own which, though less reliable, is not without merit.

I discovered it in the 1980s when asked to participate in an attempt to save the life of a man desperately ill in New York. The order to which he belonged followed an Egyptian tradition with which I was familiar. Indeed, they had come across it from hints contained in a book I had previously written.5

You will not expect me to disclose further details, but I can reveal – and many of you will understand why – that the rite reached its climax with a dramatic (and, I still recall, extremely beautiful) psycho-sexual conjunction involving the lower and higher realities present that afternoon.

The operation over, I undertook to keep vigil at the sick man’s bedside – only to fall asleep, I regret to say, before scarcely an hour had passed. When I woke up, it was to find the room infused with a pale green luminosity, strangely iridescent yet at the same time curiously still. And at the end of the bed, arms folded, stood two dark-skinned Egyptians who, to my huge disappointment, resembled nothing other than extras in one of those technicolour epics, set along the Nile, that used to star Burt Lancaster (or was it Charlton Heston?). They just didn’t look right. Not right at all. Small wonder that I closed my eyes and fell asleep again.

I am pleased to report that the patient survived. Indeed by the next morning all vestiges of what had purportedly been a terminal illness were gone. Only later, did he tell me how, in a state of what he took to be delirium, he had watched two Egyptian hierophants bestow a blessing on him.

And that’s how I came to realise that the Egyptians I took to be fake were for that very reason something other than the product of my imagination. For had I simply imagined them, I’d have come up with something far more plausible, at least in my eyes, than the pair I’d observed. (To me, as I said, these looked as if they’d just stepped out of central casting.)

And that’s how I came to realise that if one is unsure whether something one has seen is imagined or objectively real, the more its appearance diverges from what you would have expected, the more likely it is to be independent of you. It may not work every time. But it’s worth remembering.

Does any of this help the newcomer I mentioned at the beginning? Perhaps just a little. The separation between the subjective and objective in magical practice is in any case always slightly blurred. So, too, is the division between a “higher” reality and that “lower” (or vibrationally more limited) one we currently occupy.

Our supreme task as occultists is to reconcile the two. Initiates know beyond doubt that only when that happens will duality beget the One whose conquest of Time is destined to bring about the apotheosis of our race. And, with it, the ultimate redemption of the world.

But that heady prospect carries us far beyond our starting point. Naturally, we should never lose sight of it but neither should we neglect the basics of our craft. Above all, questions put to us by newcomers, however naive or irritating, should on no account be side-lined or dismissed, even if, as with the one discussed here, we can offer no hard and fast answers.

Of late I have become increasingly concerned about the tendency among some contemporary esoteric orders (fortunately a minority) with high-falutin names and grandiose pretensions, to lose themselves in lofty speculation or indulge in ceremonial which, like that of Freemasonry, looks hugely impressive but is bereft of magical vitality.

Magic requires a lot of hard graft. And it requires answers, even if only provisional ones, to a lot of awkward questions. Let us not forget it.

This article was published in New Dawn 98.
If you appreciate this article, please consider a contribution to help maintain this website.