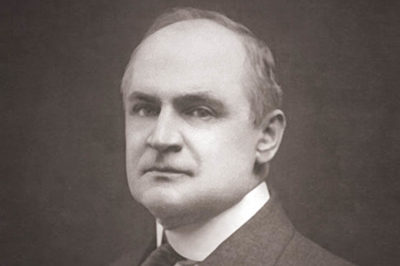 And with the wish the energy was born…
– Corpus Hermeticum, book I

I once regarded The Kybalion as little more than a novelty of early twentieth-century occultism. I considered the book a faux-antique work of mind-power philosophy, dressed up in pseudo-Hermetic language and offering a handful of serviceable but not greatly significant ideas of practical spirituality.

This enduring work, which appeared on the American occult scene in 1908 under the mysterious byline “Three Initiates,” has earned its posterity. The book serves as something close to what it claims to be: a “Great Reconciler” of metaphysical, transcendental, and New Thought philosophies.

Although some of The Kybalion’s reference points and formulations are plainly modern, the book can justly be defended as an authentic retention of certain ancient Hermetic ideas. Its author – about whom I’ll say more in a moment – drew upon elements of the Hermetica, a late-ancient collection of Greek and occasional Latin writings attributed to the mythical man-god Hermes Trismegistus, or “thrice-greatest Hermes.” This was a Greek appellation for Ancient Egypt’s god of writing and intellect, Thoth, whom the Greeks venerated above their own Hermes or Mercury. Using Greek literary form, the various and unnamed authors of the Hermetic tracts, not always agreeing among themselves, codified fragments of immeasurably old oral precepts from Ancient Egypt.1

I should have listened more closely when, almost twenty years ago, a respected religious philosopher, who himself had translated some of the core Hermetic writings, told me of The Kybalion, with his voice low and a gleam in his eye: “There are some good ideas in that little book.”

Indeed there are – and it took me a long time to rediscover them. It is not always easy to say exactly what brings us back to a book or an idea. I had always orbited around The Kybalion, albeit tentatively; I admired or grew friendly with some of its acolytes and with cultural figures influenced by it; and, finally, in 2017, I returned to the book in full. It was as though a light went on. Maybe my journey is an example of the book’s dictum: “When the ears of the student are ready to hear, then cometh the lips to fill them with wisdom.”

Before saying more about the value of The Kybalion, let me address the question of its authorship. The identity of the “Three Initiates” has long been a source of speculation and drama; this can serve as a distraction from the book’s greater significance. The Kybalion was written by New Thought philosopher William Walker Atkinson (1862–1932), a remarkably energetic Chicago publisher, writer, lawyer, and spiritual seeker, who deserves to be remembered for this, his greatest work. Atkinson was one of the most incisive New Thought voices of the twentieth century.

Among the many pieces of evidence, both literary and documentary, that demonstrate Atkinson’s authorship, he acknowledged himself as the sole writer in a 1912 entry in Who’s Who In America. Historical scholars, including Philip Deslippe and Richard Smoley (I also take up the matter in my Occult America), have amply demonstrated that there is no reason to argue with him. This prolific and thoughtful man was the Three Initiates. It should also be noted that in the traditional literature, Hermes Trismegistus addresses himself to three disciples: Tat, Ammon, and Asclepius, which may have been a source of inspiration for Atkinson’s byline.

Atkinson was also the book’s original publisher at his Chicago-based Yogi Publication Society. The press published its owner’s many influential and not infrequently pseudonymous works, including books under the names of Yogi Ramacharaka and Theron Q. Dumont, as well as Atkinson’s self-bylined works. For generations, the writer-publisher’s diminutive blue hardcovers were a well-loved mainstay of New Age bookstores and served to influence a wide range of occult and metaphysical seekers.

More important than The Kybalion’s byline is how the book highlights ideas about mind, matter, and thought-creativity, some of which demonstrate authentic resonance with Hermetic antiquity. This is no small matter. The Kybalion is not merely, or at least not only, modern New Thought clothed in ancient garb; rather, the book connects us, however tenuously, to ideas that once motivated seekers from a vastly removed era.

Deslippe and Smoley have admirably tracked some of Atkinson’s sources; to their work I would add only that Atkinson was a capable surveyor of Victorian-era and Theosophically based translations of Hermetic literature, which is how the corpus was available to early twentieth-century readers. In particular, he would have encountered the translations of G.R.S. Mead (1863–1933), a scholar of ancient mysticism and one-time secretary to Madame H.P. Blavatsky (1831–1891), a figure whom Atkinson revered. The influence of Blavatsky’s 1888 occult opus The Secret Doctrine is evident at several points in Atkinson’s writings. Mead’s 1906 translation of the Hermetica, published two years before Atkinson’s effort, while turgidly worded in late-Victorian prose, and sometimes almost purposely written as if to assume an antique affect, was then one of the few sources of Hermetic ideas in English. With a skilled and discerning eye, Atkinson identified and distilled insights that corresponded to the sturdiest aspects of New Thought, or what William James had contemporaneously called “the religion of healthy-mindedness,” a field in which Atkinson was deeply steeped. The seeker-writer used his considerable curatorial abilities to produce a marriage of ancient and modern psychological insights.

Atkinson focused primarily on the veritable Hermetic principle that Mind is the Great Creator. According to Hermetic literature, a supreme Mind, or Nous, uses as its vehicle a threefold process consisting of, 1) subordinate mind (demiurgos–nous); 2) word (logos); and 3) spirit (anthropos), concepts that echo, albeit distantly, in Atkinson’s work. The Kybalion is structured around “Seven Hermetic Principles,” which follow from the Hermetic concept of “seven rulers” of nature. Man, we are told in book I of the Corpus Hermeticum, the body of work translated during the Renaissance, “had in himself all the energy of the rulers, who marvelled at him, and each gave him a share of his own nature.”2

Further still – and this is vital to the book’s power and usefulness – The Kybalion ably ventures a theory of mind causality. The book explains why, from a metaphysical perspective, our minds seem to possess formative, creative abilities, and yet, even as we evince powers of causation, we are also subject to limits of physicality, mortality, and daily mechanics.

As beautifully articulated in Atkinson’s chapter “‘The All’ in All,” the individual may wield traits of a higher manifesting Force – but that does not make the individual synonymous with that Force. Man, the book counsels, may accomplish a great deal within given parameters, including transcendence of commonly presumed limitations, influence over the minds of others, and co-creation of certain circumstances; but the book reminds the idealistic reader that we bump against physical parameters even as we are granted the capacity, within a given framework, to imitate the Power that set those parameters. In this, The Kybalion honours the views of the ancients.

Atkinson offers compelling philosophical definitions of concepts of rhythm, polarity, paradox, compensation, and “Mental Gender.” In a sense, the philosophy found in The Kybalion is an application of Hermeticism, Neo-Platonism, Transcendentalism, and New Thought. The book also attempts, however fitfully, to correspond its ideas to the early-twentieth century’s nascent insights into quantum mechanics and the “new physics,” which gained currency in the decades immediately following its publication. In this sense, the author exaggerates only slightly when he writes: “We do not come expounding a new philosophy, but rather furnishing the outlines of a great world-old teaching which will make clear the teachings of others – which will serve as a Great Reconciler of differing theories, and opposing doctrines.”

The overall spirit of The Kybalion can be traced to book XI of the Corpus Hermeticum, in which Hermes is told by Supreme Mind that through the uses of imagination he can discover the workings of Higher Creation: “If you do not make yourself equal to God you cannot understand Him. Like is understood by like.”3 Hermes is told to use his mind to travel all places, to unite opposites, to know all things, to transcend time and distance: “Become eternity and thus you will understand God. Suppose nothing to be impossible for yourself.” Hermeticism teaches that we are granted a Divine birthright of boundless creativity and expansion within the imagination. This teaching is central to the Hermetic philosophy, and its modern re-sounding in The Kybalion.

Brief in length yet epic in ideas, The Kybalion should be read repeatedly by anyone with an interest in New Thought or practical metaphysics. For the modern seeker, the book can, as its author promises, serve as a source of coherence among various, and sometimes conflicting, modern mystical philosophies.

Does life grant us second chances? I believe that it does. One of mine arrived in rediscovering this meaningful book. As you enter its pages, I wish you the highest of discoveries and discernment.


This article was published in New Dawn 165.
If you appreciate this article, please consider a contribution to help maintain this website.
The above is slightly adapted from the Introduction to the Italian edition of The Kybalion.