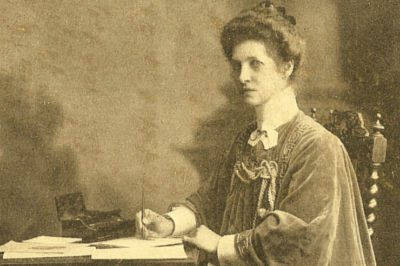 Australia has a long tradition of self-help literature and much of it was written, in the early years, by colourful characters who embraced a hodgepodge of new and progressive ideas which included Theosophy, New Thought, Swedenborgianism, Socialism, Christian Science, temperance, vegetarianism and marriage reform. This connection between minority religious and social philosophies and ideas of individual mental development was to be observed across the Western world from the late 19th century, though the connection often surprises modern readers.

One of the greatest characters to have written and taught in early 20th century Australia called herself Sister Veni Cooper-Mathieson (1867–1943). She was a prolific, if highly eccentric, author in the field of self-help, a true pioneer who perambulated through most of the cities of Australia peddling her New Thought philosophy.

A polymath in outlook, Sister Veni saw Australia as ripe for the development of new ideas about religion and mental development. She anthropomorphised, and at times even eroticised, a country she saw as being undeveloped, writing in her 1904 book Australia! Land of the Dawning:

“Still no man knoweth thee, O! Virgin Land! No hand hath yet uncovered thy secret parts, nor eye searched out thy hidden mysteries. In thy fair bosom thou holdest treasures unknown and even undreamed of.”

Australia was, for her, a metaphor for the individual, all of us containing vast and unexplored richnesses and possibilities, though few men knoweth them. In this same book she set out her vision of Australia as a “lovely virgin freshly risen from the waves,” ready to lead the world in these new philosophies, quickly to become a universal “City of Refuge.”

She was a serial religious entrepreneur who posited herself as a thoroughly modern woman. “Sister,” in her case, did not connote any membership of a Catholic religious order. The usage was in fact common among non-conformist religious groups, as best exemplified in the person of the American Pentecostalist preacher Aimee Semple McPherson, known lovingly across the world as “Sister Aimee,” founder of the International Church of the Foursquare Gospel. Sister Aimee was herself a visitor to Australia in 1922, and I suspect her name and example would have been well known to Sister Veni long before that visit.

Sister Veni made her living publishing books and journals, conducting lecture series and correspondence courses and overseeing spiritual libraries, study centres and healing rooms, the latter which saw her eventually fall foul of the Australian law. Any close examination of her output, and of mentions of her in the contemporary press, proves that Sister Veni was somewhat luckless. She was pursued doggedly by the authorities across Australia who seemed convinced that she was a fraud. She moved from city to city, and frequently found trouble with the police.

The Tasmanian authorities, for example, looked askance at Sister Veni’s claims to be a medical practitioner. After she had offered a young constable treatment for his bad back, which involved her blowing across a damp flannel draped over his naked form, she was arrested and charged with fraudulent practise.

Sister Veni was a charismatic teacher, writer and leader in what was already recognised as a traditional American mould, and it is highly likely her slightly dictatorial and grandiloquent style got in the way of her attracting a genuinely popular following in the always-cynical Australia.

Her writing is littered with colourful and grandiose references to the Christ ideal, a central idea of New Thought (as it was of Christian Science). From the turn of the 20th century till the advent of the First World War, she was a prolific publisher of New Thought journals in the various state capitals she moved between. In organs such as 1913’s ‘The Healer’ (“A monthly publication devoted to the teaching of the true science of life, health and happiness”), Sister Veni variously bullied, lectured and bamboozled her readers with these new ideas, relying heavily on biblical quotation and Christian imagery to make her point.

Interestingly, Sister Veni was also much involved in questions relating to women. She wrote on Woman’s Emancipation (1904), and, like the Adelaide Theosophist and eccentric Agnes Benham before her, was concerned that a correct conception of marriage is essential to personal and social spiritual development. She wrote that unless a marriage is a, “true spiritual union there is no marriage in the sight of the most High God, for he deals with us purely as spiritual beings.”

This idea is lifted directly from the 18th century Swedish mystic Emanuel Swedenborg, who taught of the importance of true spiritual marriages, in which bonds are unbroken even in the afterlife, where married couples will spend an eternity in heaven together. For Sister Veni marriage was mostly a prison for women, and true spiritual companionship was rare. Most marriages, she opined, were useless because they were based on temporal considerations.

She advocated what she called “Free Unions,” unvisited by state intervention, in which the children of love matches might be raised in a spirit of genuine affection, and which might allow couples to dissolve their bonds with ease if it might be discovered that theirs is not, in fact, a spiritual marriage in the eyes of the most High God.

She was also the founder of the White Cross Moral Reform Crusade, a group for young women that met in Sydney’s Domain and required of its members a pledge of chastity and “womanly modesty.” This group was formed as a reaction to what Sister Veni perceived as a “defiling and debasing atmosphere of lust.” This atmosphere was, she asserted, “robbing our women of their womanhood, undermining the health, strength and beauty of our girls. It is a menace to the home-life of the future, to the stability of the Nation, and the true development of the coming generations.”

Moral destitution was a by-product of an insufficiently exercised mind and body, and Sister Veni saw the ideas of New Thought as a way out of this low point in human history caused, in part, by the hypocrisies of older religious frameworks. An advancing era of personal responsibility would save young people from their destructive lusts. Basically, this was a group advocating sexual abstinence among young people to avoid the social and health problems of early pregnancy and venereal disease.

Again this kind of connection to self-improvement might seem unlikely, more associated, perhaps, with the puritan fundamentalism of mainstream Protestant groups of the times like the Methodists and Presbyterians. But this was a direct copy of a similar movement among New Thought women in America. The movement had from its earliest days made a neo-gnostic connection between sexual purity and spiritual advancement.

This wonderfully inspired and energetic woman has, until recently, been almost lost from Australia’s history books. Historians, writers and academics have traditionally been hostile to expressions of overt spirituality, and have dismissed important figures such as Sister Veni Cooper-Mathieson as quacks unworthy of serious examination. But perhaps a new generation of thinkers will recognise these fascinating figures as the great pioneers they were, and re-instate them as important figures in literary and cultural history.

This article was published in New Dawn 141.
If you appreciate this article, please consider a contribution to help maintain this website. 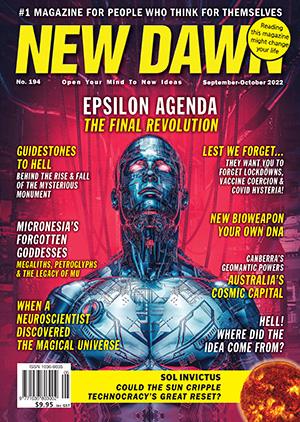