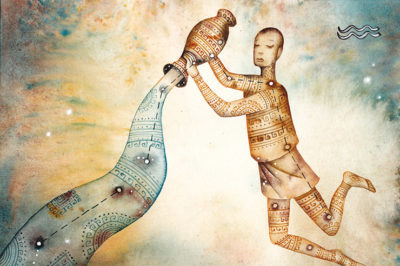 I first became aware of Dr. Albert Amao’s groundbreaking work in consciousness development when I booked him to speak at a Theosophical Society meeting in the US state of Minnesota. The occasion allowed a number of us to spend some time with Dr. Amao and hear him personally describe his work.

Dr. Amao’s latest book, The Birth of a New Consciousness and the Cycles of Time, examines the development of human consciousness on the eve of the new Aquarian age and the ‘God’ image that changes throughout the cycles of time.

A graduate of San Marcos University in Lima, Peru, Albert Amao holds a Ph.D. in sociology and has written extensively on metaphysics and New Thought. The author of several books, his Healing without Medicine: From Pioneers to Modern Medicine, published in 2014, was the basis of an article he wrote for New Dawn 144 (May-June 2014).

I asked Dr. Amao to explain the ideas in his new book. These are his responses.

VON BRASCHLER (VB): What do you mean by the concept of cosmosociology?

ALBERT AMAO (AA): The concept of cosmosociology refers to the study of the evolution of human consciousness through the zodiacal ages. It considers that there is a meaningful coincidence between the zodiacal glyphs and mass consciousness. There is a resonance between the cosmic rhythms of an age and the behaviours of social groups at large. Cosmosociologyis a theoretical framework to discuss human evolution based on cosmic cycles, which in turn are based on the precession of the equinoxes. The anchor point for cosmosociology and the zodiacal ages is the ecliptic, not the constellations.

Furthermore, there is another constellation named Ophiuchus (the Serpent Bearer), located between Scorpio and Sagittarius, making thirteen in total. In the year 1930, the International Astronomical Union (IAU) revised the boundaries of the constellations and adjusted to the real number of constellations. According to it, the path of the ecliptic now officially passes through thirteen constellations – the twelve traditional constellations plus Ophiuchus.

The word cosmosociology also can be understood as world astrology, applied to the study of the evolution of collective consciousness through the zodiacal ages.

VB: What are the purposes of your book? What do you want to demonstrate?

If you appreciate this article, please consider a contribution to help maintain this website.

VB: How will human consciousness expand in this coming age? In what direction? Is this development necessary?

VB: What is the relationship between the zodiacal ages and the development of consciousness?

VB: What are zodiacal ages and what is their importance?

AA: Ever since the great Greek philosopher Plato articulated the concept of the cosmic age commonly known as the Platonic year (consisting of 26,000 years), there has been much speculation about this subject. Religious historians, astronomers, astrologers, philosophers, and other scholars have written about it; but there has never been a clear conception about the cosmic ages, their lengths in time (i.e., their starting and ending points), or their individual characteristics, etc. The zodiacal signs set the “spirit of the time” of each epoch.

The fundamental concept in establishing the dawning of the Water-Carrier Age is the precession of the equinoxes. The language of the zodiacal signs and the planetary system provides the dates of past cosmic events with accuracy, as they are not subject to human manipulation.

VB: Many authors have predicted different dates for the coming of the Aquarius (or Water-Carrier) Age. Which one is correct?

AA: You are absolutely right that many different dates have been proposed for the upcoming age. There is wide agreement that humankind is approaching this New Age; however, there is no agreement about the date of its commencement. Some authors say that the Age of Aquarius started in the year 2000. Others, including the occult lodges known as the Hermetic Order of the Golden Dawn and the Builders of the Adytum, believe this era began in 1781, when the planet Uranus was discovered. Jung suggested that the Aquarian Age would begin either in 1997 or 2154. Esoteric writer Edward Carpenter proposed 1936, Serge Raynaud de la Ferrière, founder of the Great Universal Brotherhood, advanced March 21, 1948. French astrologer Paul Le Cour asserted that the Age of the Water-Carrier would start in 2160. The American sleeping prophet, Edgar Cayce, predicted the beginning of the New Age would take place in 1998, and Mme. Blavatsky, 2156. In short, the dates suggested range from 1781 to 2160. Determining which one is the correct was one of the goals of the book.

VB: You describe entry into a transitional period from the Age of Fishes (Pisces) to the Water-Bearer (Aquarian) Age. How soon will these coming changes be realised?

Two degrees leeway for the ending of one zodiacal sign, along with two degrees of the upcoming sign, result in a total of 144 years for each zodiacal sign. Thus, the total years of a transitional period would be 288 years. Consequently, if we agree on the timetable proposed in this book for the zodiacal ages, the Water-Carrier Age will “officially” start in the year2154, with a transitional period that encompasses the years from 2010(2154 – 144) to 2298 (2154 + 144).

During the transitional period, a combination of events that belong to both zodiacal signs is expressed in the world. This is the period of great transmutations and adjustments in all levels of human activity. We are fortunate to be witnessing one of the greatest sociopolitical and religious transformations that planet Earth has ever undergone. It is vital for modern man to understand this fact, so he can be mentally and spiritually prepared to confront the upheavals entailed by these changes of cosmic dimensions.

VB: Your book describes how people must be prepared to confront the upheaval that entails the shift in ages. Could you describe these psychological upheavals?

AA: During a transitional period many radical changes are likely to come. The mind has the power to create whatever it believes and conceives. As a result, unfounded predictions have wider consequences than are sometimes imagined. Susceptible and uninformed people believe they are true. They are then inspired to subconsciously create unfavourable situations in their lives that have ripple effects on their families and on society in general. And a group mind is an even more powerful device for materialising ideas.

This work is a stride toward the acceleration of a new reality – a consciousness of the oneness and solidarity of humankind. As these ideas start sinking into the collective psyche, individuals will create this reality accordingly. Consequently, humans as a whole will experience a leap in consciousness, as they become aware of the true nature of the world and of our role in this world. They will realise that humans need to be conscious participatory agents in the development of their history. Prayer, meditation, fasting, and contemplation will help people to maintain peace of mind.

VB: You indicated that the God image of this coming age will be different? How so?

AA: Jung discovered the existence of a central “archetype of wholeness” that dwells in the collective unconscious. This archetype of wholeness can be identified with the life force energy, expressed in human terms as a deity or God-image. The God-image is a symbolic conceptualisation of the collective self, which is different from God per se. God is unknowable and undefinable. By contrast, God-images are symbolic mental representations of central archetypes of the collective subconscious. Usually linked to myths, legends, and religious symbols, they have played an active role in the evolution of human thought since the dawn of civilisation. The new God-image is the acknowledgement of the inner self, the manifestation of the Divine Spark that dwells in every human being.

The social and psychological crisis that modern man is confronting is caused by the lack of a central myth that can provide meaning and purpose at both the individual and collective level. The myth of the Age of the Fishes – in the Western world, the Judeo-Christian religion – has lost power and influence as a source of spiritual inspiration. Thus, it is extremely important to redefine the concepts of God, man, and the universe.

VB: What are the tell-tale signs of the advent of this coming new age?

AA: The radical changes occurring as we enter into a new dispensation (Age) have been taken by some as signs of the end of the world. Something similar happened with the end of the Long Count of the Mayan calendar on December 21, 2012, which received a great deal of attention before it occurred. However, this date only represents the closing of an epoch and the beginning of a new chapter in history.

The current planetary crisis amounts to a series of signs that we are entering into a transitional period – the ending of the Age of the Fishes and the slow dawning of the Water-Carrier Age. Currently, humankind is witnessing one of the greatest sociopolitical and religious transformations that planet Earth has ever undergone. I attempt to demonstrate that the present challenging situation of the world is part of a natural cycle in human history. Political, socioeconomic, and religious upheavals are necessary adjustments for the entrance into a new worldwide order of social and economic justice, which will be based on a higher level of international understanding and knowledge.

VB: What role will organised religion have in this coming age?

AA: There is an ancient Rosicrucian aphorism that states, “There is no God but man, and man is the son of God.” The whole philosophical discussion about religions is based on that statement. The God-image we are used to is an old, white-bearded deity seated on a golden throne somewhere in the infinite surrounded by his angels, and giving them orders to manage human affairs.

The fundamental purpose of this new dispensation is to change the paradigm from one of the relationship between a far-distant God to one of an indwelling God principle. The era of organised religion as an intermediary between God and man – and as a means of social control – is coming to an end. Instead, we will witness the direct spiritual connection of each individual with his or her divine self.

This article was published in New Dawn Special Issue Vol 10 No 4.
If you appreciate this article, please consider a contribution to help maintain this website.

The Birth of a New Consciousness and the Cycles of Time (AuthorHouse, 2016) is available in book or electronic format online from Amazon, Barnes & Noble and other outlets. Dr. Albert Amao is available for lectures upon request. Email: stgermain777@gmail.com