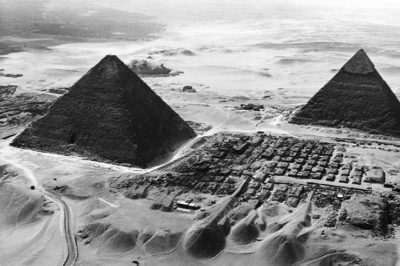 In my book Egyptian Dawn, I challenge many aspects of the conventional opinions about the history of Egypt before 2000 BCE. Not only do I put forward a lot of new evidence, I show that some of the old evidence is faked.

For instance, it can be demonstrated that the Egyptian annals known as the ‘Cairo Fragments’ are the product of antiquities forgers in 1909/10. These were sold in the Cairo Bazaar in 1910 and credulously accepted by most Egyptologists. As a result, large portions of the reconstructed history of Archaic Egypt are false.

My colleague Professor Ioannis Liritzis, of the University of the Aegean at Rhodes, and I have re-dated several key Egyptian monuments using a revolutionary new dating technique. It is called optical thermoluminescence (not the same as ordinary thermoluminescence which is used for pottery). It was invented by Ioannis, who as a former nuclear physicist has come up with this new method for dating stone structures directly for the first time. Most of our results show that the structures tested are older than they should be.

From the sarcophagi within it, we have dated the famous Osiris Shaft which extends 114 feet below the surface of the Giza Plateau, and made surprising discoveries about it. We have re-dated the pyramids of Giza and proved that they could not have been built by Cheops, Chephren, and Mycerinus.

I describe the suppressed details of the royal pyramid of King Enezib, fifth king of the First Dynasty, at Saqqara, which was 75 long and 43 feet high, but is never mentioned in histories of pyramid evolution because it is ‘too embarrassing’. I show the surprising connection between it and the Step Pyramid of the later King Zoser, built by Imhotep. I translate for the first time the names of seven predynastic kings of Lower [northern] Egypt which are recorded on the Palermo Stone, an ancient annal.

I believe I have discovered the precise locations of no fewer than seven intact royal tombs at Giza, and I publish the photos and plans. These include the tombs of Cheops, Chephren, and Mycerinus, which have never been entered since those pharaohs were buried. Those pharaohs were never buried in pyramids as naively imagined today, but within the Plateau, as insisted upon by Herodotus as long ago as the 5th century BCE, though everyone ignores his explicit statements because of ‘consensus blindness’. I believe the tomb of Sneferu is also one of them.

As for the other three, I do not know whose they are. One is probably a gigantic Hall of Sokar (later referred to as Sokar-Osiris, Ptah-Sokar-Osiris, or simply as Osiris). This may be what enthusiasts tend to call ‘the Hall of Records’. A much larger ‘Tomb of Osiris’ is probably down there than the tiny one at the bottom of the Osiris Shaft. It would contain another subterranean canal surrounding an island with a sarcophagus, but on a very grand scale. I have discovered evidence connecting King Send (Sened), fifth king of the Second Dynasty, with Giza. It is possible that he is buried there. Only excavation and opening of these sealed time-capsules will answer our questions.

I have been able to prove that large underground caverns were hollowed out of the limestone plateau of Giza, and that enormous complexes of subterranean chambers exist beneath the Giza Plateau, as many people have long suspected. I suspect that these locations must contain texts as well as the usual treasures, gold, etc. Frankly, I am more interested in texts than gold. Any sensible person would be.

I have previously suggested in my earlier book The Sphinx Mystery (2009) that the Giza Plateau was a unified design complex, and that all three main pyramids and the Sphinx were constructed as one single concept. I produce much more proof of this in this new book.

I have been able now to reconstruct the remaining two (of three) superimposed ‘Giza plans’ which explain the essentials of Giza. They consist of two separate but overlapping squares. One I call the ‘Shadow Square’ and the other I call the ‘Perfect Square’. These are merely names I have given them for convenience, but I believe them to be appropriate.

The fundamental aspects which everyone else has missed in trying to reconstitute the concealed design plans of Giza are these: (1) there are three superimposed plans, each separate from the other, but complementary, and this was done on purpose to prevent anyone from ever discovering more than one, a kind of ‘triple lock’, and (2) the ‘key’ to unlocking the secrets of two of the plans is the shadow cast at noon on the winter solstice by the Great Pyramid. (Hence the name ‘Shadow Square’.) If you do not take this shadow into account, you cannot find the true northern boundaries to the Giza Plans. (One of them has the shadow tip define that distance, and the other is a secondary derivative of it.) In my study of the geometry of Giza I have achieved an accuracy to within two feet in an area of just under 11 million square feet.

The ‘Perfect Square’ of Giza gives an Eye of Ra design staring up at the zenith of the sky. I reproduce this here (see illustration, courtesy of Robert Temple, on page 41). Only if this particular square is used can a compass point put at the NE and SW corners of the square swing arcs which make the vesica piscis (which constitutes the Egyptian hieroglyph for the letter ‘r’, thus writing ‘Ra’ or ‘Re’, and which also means ‘fraction’ in Egyptian mathematics) that cuts key points on the Giza monuments. When the correct circle is drawn within this using the centre of the Square as its origin, to form the iris of the eye, an Eye of Ra intersecting six key points is formed staring straight up at the sky.

This Eye of Ra occurs throughout the entire history of Egyptian art for thousands of years. But its largest and finest expression was the invisible Eye of Ra formed upon the Giza Plateau as a consequence of the Giza Plan which gave rise to the precise sizes and positions of the three main pyramids. The Eye, seen in the illustration, intersects the apex, southeast corner, and midpoint of the base of the south face of the Great Pyramid, the midpoint of the Sphinx, and the midpoints of the bases of the northern and western faces of the Pyramid of Chephren.

One might well wonder why the ancient Egyptians should go to all this trouble to design an Eye of Ra which no one could ever see, and which is invisible, and even if it weren’t could only be seen looking down from the sky, since it exists only on a geometrical plan or in the mind, and nothing whatever can be seen on the ground. The answer to this may well be found in a strange text surviving amongst the collection of ancient wisdom texts known as the Hermetica, Tractate Five. (These texts are of mixed date, having been written in their present form in Greek under the rule of either the Ptolemies or the Romans, thus possibly as late as the 2nd century CE.) Many of them were reworked as Greek philosophical works mixed with ancient Egyptian material in a complete hodgepodge. No one has ever been able to come up with a definitive list of which material is Egyptian and which is Greek, as these are all mixed up, though a few of the tractates such as this one seem relatively undiluted. In this text, the Egyptian god of wisdom and writing, Thoth (in the guise of his Greek name, Hermes), is addressing his disciple called Tat:

You must understand how something that seems invisible to the multitude will become entirely visible to you. Actually, if it were not invisible, it would not always be. Everything seen has been begotten because at some point it came to be seen. But the invisible always is, and, because it always is, it does not need to come to be seen. …Clearly, the one who alone is unbegotten is also unimagined and invisible… understanding… is invisible, sees the invisible, and if you have the strength, Tat, your mind’s eye will see it. …Can you have a vision of the image of god?… If you want to see god, consider the sun. …Would that you could grow wings and fly up into the air, lifted between earth and heaven, to see the solid earth… Oh, this is a most happy sight to see, my child… This is the order of the cosmos, and this is the cosmos of order.

The answer is that the ancient Egyptian priests believed that the true image of the divine could only be invisible. This is the deeper truth of the Egyptian sacred mysteries, ironical in a civilisation normally believed to worship idols. In fact, the Egyptian did not ‘worship idols’ in the sense we think of those words at all. There was no word in ancient Egyptian meaning ‘belief’, just as there was no word meaning ‘religion’. They communed with the cosmic order, and all the gods and goddesses were personified images and facets of that One.

Just as your parent or your spouse may keep an album or a computer folder of photographs of you, all different, some smiling, some frowning, some dressed as Santa Claus, so the Egyptians had their portrait gallery of the One Supreme Being looking like different personifications of the endless aspects of himself/herself, arrayed as statues and relief carvings and paintings in all the temples throughout the land. At one moment, God was Osiris, at another moment God was Isis, and at yet another God was Amun, which significantly means ‘the Hidden One’ who cannot be seen and is invisible. I believe that the sacred concept that the invisible is more important than the visible existed from predynastic times in Egypt and explains the thinking behind all the empty sarcophagi, tombs, pyramids, and secret chambers.

What I have just said about invisible patterns does not appear in my book, it is an extension of what that book contains. Amongst the many other ‘invisibles’ and hidden things which I reveal is an elaborate network of secret passages, shafts, and chambers riddling the walls of the Valley Temple of Giza like a honeycomb. The book and its website www.egyptiandawn.com contain many, many photos of these previously unknown features of the only intact temple surviving from the Old Kingdom of Egypt. I have also translated from German the only excavation report of this structure, published in 1912, which does not mention these passages and chambers at all. This translation can be downloaded from the book’s website.

Oh yes, and I almost forgot to mention that the final chapter of the book contains a solution to the riddle of Atlantis. What and where was it? Did it have any connection with ancient Egypt? All this is answered. I also publish photos and a description of the world’s largest megalithic ring, of which few people have until now had any knowledge at all.

Illustrations courtesy of the author. Egyptian Dawn by Robert Temple is available from all good bookstores.

This article was published in New Dawn Special Issue 13.
If you appreciate this article, please consider a contribution to help maintain this website.