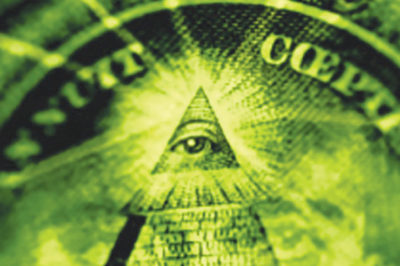 “A paranoid is someone who knows a little of what’s going on. ”
– William S. Burroughs

“Ignorance…brought about anguish and terror. And the anguish grew solid like a fog and no one was able to see.”
– The Gospel of Truth, 17:10, Nag Hammadi Texts

“Humanity is asleep, concerned only with what is useless, living in a wrong world….Do not prattle before the People of the Path, rather consume yourself. You have an inverted knowledge and religion if you are upside down in relation to Reality. Man is wrapping his net around himself. A lion (the man of the Way) bursts his cage asunder.”
– The Sufi Master Sanai, teacher of Rumi, in The Walled Garden of Truth (1131 C.E.).

What role does conspiracy and cover-up play in the multifarious facets of life in the closing years of this twentieth century? Are powerful groups manipulating events as part of a long-range strategy to bring about a totally controlled global society? Does recognition of conspiracies lead to paranoia and delusion? Or does it actually explain events and thereby empower people?

It is not the purpose of this short article to examine the range of crimes, cabals and secret plots broadly covered by the word conspiracy. Nor do we intend to prove the existence of some international conspiracy at work in the crisis torn world of the 90s. What we want to touch on is the implications of conspiracy theories for personal transformation. What we want to explore here is a different way of seeing the world.

First let us define the meaning of that seemingly disturbing word: “conspiracy”. Webster’s International dictionary gives, as one connotation, “a combination of men for an evil purpose; a plot”. The Oxford Dictionary of English agrees, defining conspiracy as “a combination of persons for an evil or unlawful purpose; an agreement between two or more to do something criminal, illegal or reprehensible; a plot”.

If, as a significant number of researchers claim, it can be shown that influential – largely hidden – elites have knowingly combined their efforts in a plot(s) to manipulate and control people and events, then on the basis of the standard definition just cited, a conspiracy does indeed exist.

Readers who are accustomed (or is it conditioned?) to automatically regard any mention of conspiracy as irrational paranoia, will find this very subject a ‘problem’.

Jonathon Vankin, the author of two excellent books exploring a host of conspiracy theories, observes that, “The word ‘conspiracy’ may be a ‘problem’ for some, but only because it represents the unknown, mystery, and risk. Those are the things that grip the human mind and bring it to life. These ideas can only be a problem for those who wish to keep our minds under control.”

Last century the British politician, Benjamin Disraeli, a man of wide political experience, declared that “the world is governed by very different personages from what is imagined by those who are not behind the scenes.” This century U.S. President Franklin D. Roosevelt has been quoted as saying: “In politics, nothing happens by accident. If it happens, it was planned that way.”

There really are, as investigative author Jim Hougan says, two kinds of history, the safe, sanitized “‘Disney version,’ so widely available as to be unavoidable…and a second one that remains secret, buried, and unnamed.”

This “second” version of history, Jonathon Vankin and John Whalen argue, does indeed have a name: “conspiracy theory.” According to the co-authors of 50 Greatest Conspiracies of All Time the official, safe “Disney” version of history “could just as easily be called the ‘New York Times version’ or the ‘TV news version’ or the ‘college textbook version.’ The main resistance to conspiracy theories comes not from people on the street, but from the media, academia, and government – people who manage the national and global economy of information.”

The structure of the modern world demands mass adherence to faith in the institutions that maintain the existing order and make it run. These institutions are innumerable: government, business, science, education, politics…and their survival is dependent on people’s faith in authority.

This is why ‘conspiracy theories’ are universally anathema to the Establishment. They directly challenge the status quo, undermining the blind faith of the ‘brainwashed’ masses in society’s machiavellian ‘leaders’!

Vankin quotes anthropologist Jules Henry as saying that “our civilization is a tissue of contradictions and lies.” Henry used the term “sham” for the everyday deceptions that reinforce this malignant society. “Sham gives rise to coalitions because usually sham cannot be maintained without confederates.” In other words, to keep the system afloat requires a conspiracy. “In sham,” Henry continues, “the deceiver enters into an inner conspiracy against himself.”

Acknowledging the conspiracies and cover-ups behind history and contemporary events means we can no longer lie to ourselves, like Colin Wilson’s “Outsider” who “cannot live in the comfortable insulated world of the bourgeois, accepting what he sees and touches as reality.”

Modern civilisation is a conspiracy against Reality.

R.D. Laing explains in The Politics of Experience how people are ‘conditioned’ and ‘brainwashed’ by modern society. Beginning with the children, Laing says, “It is imperative to catch them in time. Without the most thorough and rapid brainwashing their dirty minds would see through our dirty tricks. Children are not yet fools, but we shall turn them into imbeciles like ourselves, with high IQs if possible.

“From the moment of birth, when the Stone Age baby confronts the Twentieth century mother, the baby is subjected to these forces of violence, called love, as its mother and father, and their parents and their parents before them, have been. These forces are mainly concerned with destroying most of its potentialities, and on the whole this enterprise is successful. By the time the new human being is fifteen or so, we are left with a being like ourselves, a half-crazed creature more or less adjusted to a mad world. This is normality in our present age.”

In our conditioned environment we accept what we are told, largely without question. Society, or more precisely the ruling elites, define reality.

Central to every conspiracy is the suppression of specific information or the deliberate avoidance of certain key facts. Control of information is a mechanism of social control. If information is used by the ruling elites to programme and mentally enslave people, then information can be used to deprogramme and liberate them. Knowledge is the key to freedom.

According to the Sufis, the potential for clear, direct perception in man in his everyday life is largely frustrated by a distorting complex of sociopsychological conditioning factors. Often these appear in the seemingly innocuous forms of unfounded assumptions and expectations. Consequently man is ready mental putty in the hands of powerful manipulators. Conspiracies are detected only by the exercise of unfettered perception and thinking. Thus, conspirators must propagate a necessary level of confusion in those whom they seek to deceive and control.

The mere realisation of the existence and activities of various ‘conspiracies’ orchestrated by powerful ruling elites, has a largely liberating effect on a thinking individual, disclosing to him as it does the vast magnitude of the lies and deception incorporated in the various layers of official culture. The whole social structure, educational structure, economic and political structures are directly challenged.

Once a person realises that there is a ‘hidden history’ behind our so-called history, they invariably start to want to break away from the futile human pattern of seeing reality as it is not and thereby living a lie. They want to abandon the anaesthetic of ignorance and suppression within which man cocoons himself and to embrace the intensity of reality – as it is.

Conspiracies and cover-ups do exist. However, their underlying root cause is our own irresponsibility, ignorance and inactivity. The world tells us what we want to hear, giving us justifications for different states of irresponsibility. Civilization may well be destroying itself, but individuals don’t have to destroy themselves with it.

The modern world with its phobias, neurosis, contradictions and conflicts, is what we must overcome. We must break our links, sever our ties; plumb the depths of our unconsciousness, and cut the bonds with which we’ve bound ourselves.

Confronted by the intrigue of conspiracy and cover-up, we don’t react to the sham by constructing an equally dogmatic, paranoid worldview. Nor do we become down-cast, depressed or consumed with red-hot anger. There is no point in hiding away or running wildly in the street. Just be AWARE. From the inner certainty, clarity and calm of AWARENESS proceeds right and constructive action. Channel your anger, your fear, your hopes and dreams into TOTAL AWARENESS. By discerning society’s true condition you are free from the bonds of ignorance and no longer a pawn in the game. Awakening from the sleep of conditioned existence we can appreciate the words of the Sufi teacher Al Ghazzali: “The higher one ascends a mountain, the farther one sees.”

Some radical students of the Bible identify the existing social, political and economic order as “Babylon”. A name synonymous with a system of total oppression and exploitation, taken from the Book of Revelation. The government, the bureaucracy, indeed all worldly authorities are mere instruments of Babylon. Babylon, built on falsehood and sustained by ignorance, will one day come crashing down because of fundamental untruths. Awakened to the actual nature of this world, one’s life is that of exile. A stranger in a strange land. Conspiracy and cover-up is what we first encounter when we begin to perceive real life in Babylon.

“It may be that mankind has been invited to participate in a bizarre kind of contest with some undeclared cosmic opponents,” says Brad Steiger, a writer on the paranormal. “Man may have been challenged to play the Reality Game; and if he can once apprehend the true significance of the preposterous clues, if he can but master the proper moves, he may obtain a clearer picture of his true role in the cosmic scheme of things.”

If you appreciate this article, please consider a contribution to help maintain this website.