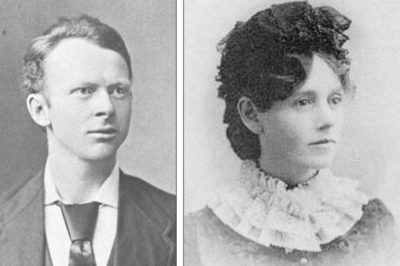 Myrtle Fillmore was in desperate straits in 1886. Sick from tuberculosis and malaria, her much-younger husband had managed to bankrupt himself in both the mining and real-estate industries. She was so weak that she was incapable of caring for her children, and her aged mother-in-law was added to an already impoverished household as cheap live-in care.

One evening she went along to see a visiting faith healer, something she always did in the vain hope there might be some way of remedying her situation. Sitting in the lecture hall she heard Dr. E. B. Weeks say something that would change her life forever: “I am a child of God and therefore I do not inherit sickness.”

Her cure seemed to happen from the moment of hearing this affirmation, and she went home and spent some intense time in meditation and prayer, day after day repeating this simple sentence. Soon she was cured of her illness, and her previously agnostic husband Charles became convinced there was something in this mind-cure business. Together they would go on to form one of the most established and long-lived of the New Thought religious organisations, the Unity School of Christianity.

Charles himself had been an invalid since he was a small boy. Having fallen on the ice and dislocated his hip as a child, he had been lame ever since. The injured leg was shorter than his other leg, and his hip was frozen in place, incapable of movement. The combined injuries caused him chronic pan, which he bore with great fortitude. It wasn’t, however, until he began to follow his own wife’s lead that he managed to find some degree of relief from his lifelong physical handicaps. He set himself his own regimen of intensive prayer, meditation and affirmation, booking an appointment between himself and God every night that he observed scrupulously. This effort soon bore fruit, and Charles Fillmore could later boast of his own cure through the application of New Thought methods.

Dr. E. B. Weeks, the metaphysical lecturer who had been Myrtle Fillmore’s unexpected saviour, was a student of Emma Curtis Hopkins, one of the most influential New Thought teachers in history. Hopkins had been a close confidante of Mary Baker Eddy, but had eventually, almost inevitably, fallen out with that strong personality. She re-located to Chicago in 1886 and quietly proceeded to influence generations of writers, teachers and spiritual leaders. Even now, those in the know refer to Hopkins as “the teacher of teachers,” though her name has been eclipsed by her more famous students. The Fillmores became so enamoured of Hopkins that they frequently made the expensive trip to Chicago to study with her, and sponsored her visit to Kansas City.

While taking part in one of Hopkins’ study groups they were inspired to establish a silent prayer ministry, which was eventually to become Unity, a name also revealed to them under the auspices of Hopkins. It was she who encouraged them in their ministry, recognising in this peculiar couple the energy, curiosity and talent for organisation that would eventually see them spreading New Thought ideas across America. In June 1891 Hopkins ordained them, and later, after they had established their own religious congregation, they would have their own students re-ordain them.

In 1891 they also caught the attention of a woman who was to become their greatest student and the author of what is seen by many as the textbook of the movement. H. Emilie Cady was a student of Emma Curtis Hopkins, and she started writing pieces for the Fillmore’s journal, also called Unity (and still being published). In 1896 she compiled Lessons in Truth, A Course of Twelve Lessons in Practical Christianity, one of the great classics of the New Thought movement, and a canonical text for all Unity students.

The Fillmores, by nature open-hearted, had always seen the potential for camaraderie among the different New Thought schools and teachers, and in 1896 they hosted a meeting for like-minded groups from around the country. Charles, busy teaching and developing his new movement, waited until 1909 to publish his first book, the influential Christian Healing. Presented in twelve lessons, this book prefigures the metaphysical theory for which he would become most famous: The Twelve Powers of Man. This set of “spiritual tools” was built around a twelve-fold framework that incorporated the twelve Disciples of Christ and the twelve months of the year. It was set out in a 1930 book of the same name, and is still used by Unity groups as a handy structure of spiritual learning.

Unity was from the start characterised by its progressive ideas and openness to all people and traditions. Part of its official doctrine is that: “All the sacred scriptures from the world’s great religions can be used to discover truth.” Charles himself had read widely in Eastern religion, as well as among the Western esoteric traditions. His exhaustive knowledge of the Bible lead him to conclude that it and all other canonical scriptures should be read and interpreted metaphysically, not literally. His Metaphysical Bible Dictionary (1931) drew on a lifetime of reading and study, and remains a useful resource for anyone seeking to understand the Bible outside of conservative Christian analysis.

Even before his conversion, Charles Fillmore had been convinced by a prophetic dream to move his family to Kansas City. This would eventually become the headquarters for the Unity movement, with Fillmore purchasing 58 acres in Jackson County, Missouri, to establish Unity Village. This religious complex, that housed his family along with worship and training facilities, is still thriving today. It is symbolised by the Unity Tower, completed in 1929, which doubles as a reservoir to help supply the complex with its water.

Myrtle Fillmore, nine years older than her husband, died in 1931, after which Charles married his secretary Cora Dedrick, with whom he worked closely on his later writings.

The organisation is best known these days for its Silent Unity prayer ministry, once accessed by letter and telephone and these days by filling in an online form, and its long-lived magazine of inspirational readings and affirmations, The Daily Word. In these forms it has touched countless lives, including many people who might not necessarily identify themselves as New Thought practitioners. It also produces a very popular online radio station, all part of this group’s tradition of media engagement and forward thinking.

The Fillmores initially strengthened their ministry through the judicious publication and distribution of journals and tracts, moving with technological changes to produce well-remembered radio and TV spots which were part of the American popular cultural landscape into the 1980s. Their inspirational late-night TV talks delivered by Charles’ daughter and many other celebrities remain iconic memories for many Americans in their 40s and 50s.

The great charm and personal conviction of the Fillmores has seen their organisation in good stead, and it has continued to operate through the years more or less free from any taint of scandal. They managed to take the distinctly nineteenth century tone of their great teacher, Emma Curtis Hopkins, and usher it into the twentieth and now into another century. They taught from example, and their teachings have gone on to help countless others properly use their minds and employ the spiritual technologies of prayer and meditation.


This article was published in New Dawn 161.
If you appreciate this article, please consider a contribution to help maintain this website.