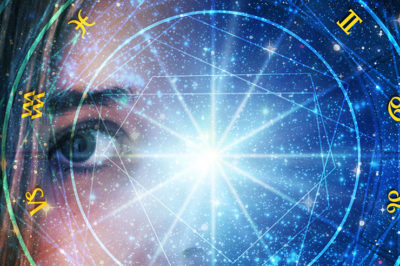 For years whenever I went to a party on New Year’s Eve, I brought my deck of tarot cards. There was usually a small group of a dozen or so close friends. Anyone who wanted a reading about the New Year could request one. It was rare for people to turn down my offer. As the Old Year winds down, the idea of a fresh beginning on 1 January is irresistible. How will things be different? What changes should we make? Are there successes and surprises to look forward to or difficulties and problems to be prepared for or to avoid?

I asked each friend to spread the cards out on the floor, face down, just as if we were going to play the kids’ game “Go Fish!” “Smear ‘em around real good,” I said. “It’s important to have the tops and bottoms of the cards constantly changing in relation to each other so we’ll get both right-side-up and upside-down cards in the reading.” I like this method better than shuffling because it puts the recipient directly in touch with the forces represented by the cards. 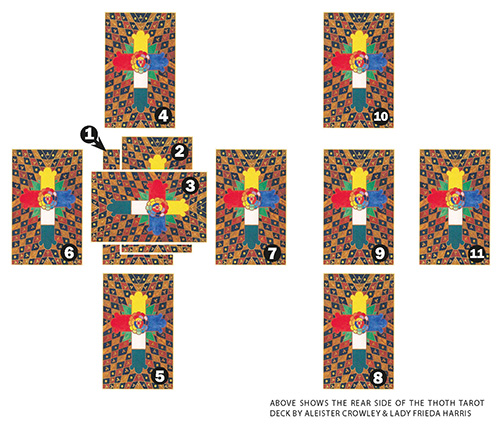 I usually use the Celtic Cross method I learned years ago from Eden Gray’s The Complete Guide to the Tarot – but with some changes. The first card to be turned up is the centre of the reading – the theme. I don’t use court cards as many readers do. I ask recipients to find the card that feels right, and place it in front of them, still turned down, with one of the narrow sides facing towards them, then to flip the card over from left to right. That determines the card’s orientation, right-side-up or upside-down. I ask recipients to do the same with every card, after which I place it in position in the cross. The order is as follows:

I think of a tarot card reading as an artificial dream. The images on the cards are like dream images and can be related to one another to create a dream story about the possibilities of the New Year. I learned the basic meanings of the cards from Gray’s book. Instead of reading them aloud, I notice which images on the cards draw my attention and weave them into the dream story. An upside-down card is never negative, it’s just a muted version of the card’s meaning (positive or negative) when it’s right-side-up.

There are many tarot decks to choose from, depending on the reader’s temperament. I use the familiar Rider-Waite deck, but I know readers who make the choice of tarot deck a part of the reading. Having used the same deck since I was in college forty years ago, I find that it has developed a personality of its own, possibly under the influence of a helpful spirit that lives, as it were, within the astral version of the deck.

Once, after a period of neglecting the cards for several years, I did a set of readings at a New Year’s party and was astounded at the number of negative and inverted cards that came up. The positive spirit had been replaced by an unpleasant trickster who enjoyed spreading doom and gloom through the cards. I got the deck to behave more positively by putting the cards back into the order they were in when they came from the factory, all right-side-up, and giving the deck a decisive whack on each of the four sides. After the next recipient smeared the cards around and began selecting them for a new reading, the results were more encouraging. 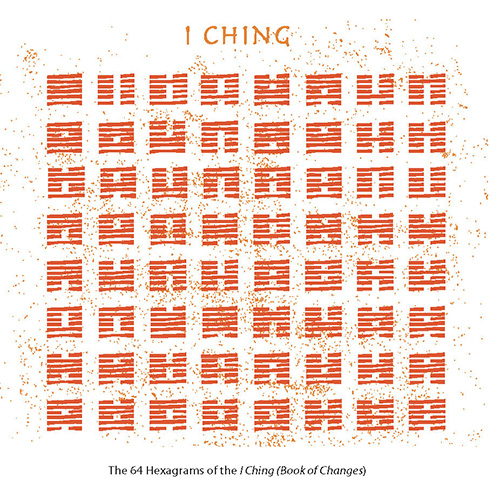 After frequently reading the cards for myself in college, I discovered that I’d learned enough about their meanings that I couldn’t get clear messages. I couldn’t trust my interpretations of the positive cards because that might be wishful thinking and I couldn’t trust those of the negative or inverted cards because they might be the result of anxiety. Such problems didn’t occur when I read for others. I had to find another method of doing readings for myself. So I began experimenting with the I Ching, or Book of Changes, an ancient Chinese text on divination compiled 2,500 years ago.

One simple method of consulting the book is to throw three coins of the same denomination six times to build a six-line figure called a hexagram. One side of each coin is assigned a value of two and the other a value of three (it doesn’t matter which side is which as long as you’re consistent). Hexagrams are made up of four types of lines:

A chart helps you discover the name and number of the resulting hexagram, of which there are sixty-four. You then look up that hexagram and read the associated text, which describes the situation in which you presently find yourself. If there are unstable lines, you also read the text associated with them. An unstable yin line is said to change into a stable yang line and an unstable yang line into a stable yin line, thus yielding a second hexagram, which you also look up, but without reading the text associated with the lines – stable lines don’t count. The second hexagram represents the situation that develops from the first one.

There are many translations and rearrangements of the ancient text for modern readers. I prefer the classic version translated from Chinese into German by Richard Wilhelm and from German into English by Carey F. Baynes (the so-called Wilhelm/Baynes version). The metaphorical language of this version of the Book of Changes substitutes for the imagery of the tarot deck and helps me interpret the situation I’m in as if it were one of my own dreams. Some newer versions are too literal and mundane for my taste; one older version, by James Legge, is so flowery as to be completely incomprehensible.

A more traditional method of consulting the I Ching, too complicated to describe here, is to use fifty yarrow stalks. This method requires three operations to determine each line of a hexagram, thus eighteen in all. It’s described in some translations of the book, as well as online. I use six-inch long bamboo hibachi skewers, thin as toothpicks, having clipped off the pointed ends. Manipulating these ‘stalks’ places me in a meditative mood. I feel as if I were handling the forces that are creating the situation I am in, each force represented by a stalk. I recommend this method to anyone interested in ceremonial magic.

No matter how frequently I’ve consulted the Book of Changes, perhaps once a day in times of trouble, I’ve always gotten a useful answer – one that wishful thinking or anxiety couldn’t tamper with, as in the case of tarot cards. Once, after having just moved to Chicago, I consulted the book about my new life there. I received the hexagram Tui, the Joyful. Aside from the positive message, I was startled by a bizarre synchronicity. Supposedly, the tossing of coins or the manipulation of stalks provides a hexagram purely by chance. In this case, some higher power must have been teasing me – I got the Tui hexagram having moved into an apartment on Touhy Avenue.

When Ralph Blum’s The Book of Runes was first published in 1982, sold with a bag of ceramic ‘rune stones’, I began experimenting with this method of divination. Blum’s book provided a range of suggestions for using the runes, from magical and sacred ceremonial or meditative methods to daily divination on mundane matters. I quickly determined that mundane divination was subject to the same limitations as the over-frequent use of tarot cards for personal readings: wishful thinking versus anxiety.

Because the Norse runes were/are a magical alphabet like Hebrew or Sanskrit, they might be better used for magical purposes. The figures are made up of lines that could represent forces interacting with each other, often creating closed or open spaces representing doorways or realms. With a basic understanding of what each rune means, you could do a New Year’s reading by spreading them face down before you and turning over three. The first would represent the realm you’re leaving, the Old Year; the second, the door you’re entering as you make the transition from Old to New Year; and the third, the realm you’re entering, the New Year itself.

By meditating on these runes one at a time, you can attune yourself to these realms and doorways and perhaps receive inner guidance to amplify whatever an interpretive guidebook says about them. Then you could place the runes on your altar or by your bedside to remind you of what you’ve learned for a week or two, drawing three more runes when you’re ready for more information.

In my experience, the runes are best used infrequently and only in connection with major periods of transition. Otherwise, they go flat, like soda water exposed to air too long.

Though astrology could be used as a means of divining what a New Year might bring, I tend to think of it in terms of birthdays rather than 1 January. Everything in astrology begins with the natal chart, so each anniversary of the first day of our life is the truer, more personal New Year. Still, it can be useful to consult an astrologer or pull up your own birth chart to check transits of the coming year’s planets over the positions they hold in your natal chart.

I’m not an astrologer myself. My views on the subject were formed by a professional I consulted several times when I was in college. For her, the natal progressed chart (how the natal chart evolves with each birthday), and transit charts were like meditation mandalas that opened up access to her own clairvoyance, from which she could pull out past-life information as well as information about present self and future developments. She did her calculations by hand (this was before the advent of computers) and limited herself to positions of planets and houses, north and south nodes of the moon, mid-heaven, and part of fortune, plus major aspects such as conjunctions, squares, and trines. She’d also studied Vedic astrology, which provided hints on reading past lives from a birth chart.

Once, she shocked an astrologer friend of mine who went to her for a reading by doing A.M. instead of P.M. calculations, so the chart was twelve hours off. But the things she said about him were just as accurate as mine had been when she was using a correct chart.

Despite this professional error, I’ve always felt she was a more trustworthy reader than astrologers who use computers to determine the influences of half-a-dozen minor planets or asteroids plus other ‘parts’ and dozens of esoteric ray affiliations and obscure aspects. If we consider the planets to exert a force that shapes our destiny, why shouldn’t an astrologer enter into a direct energetic experience of those lines of force as illustrated in a horoscope and read from them as from a roadmap where we were, where we are, and where we’re going from one year to the next?

If you’re lucky enough to find an astrologer who works this way, you’ll learn something of value any day of the year when you can get an appointment, not just New Year’s or your birthday – and the results might last well beyond this year or the next.

This article was published in New Dawn 166.
If you appreciate this article, please consider a contribution to help maintain this website.