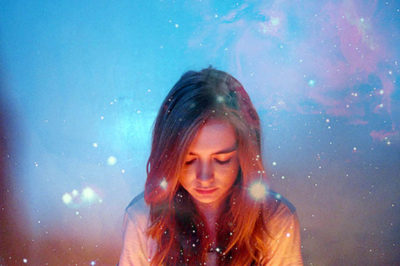 The figure seems to hover around 95 percent. That’s the proportion of the universe that consists of dark matter and dark energy – entities that are only dimly and indirectly perceived by scientific apparatus.

This fact has gotten wide attention lately, but one implication has gone unnoticed: if this is the case for the physical universe, it must also be the case for our own bodies. Therefore 95 percent of your body is made up of matter and energy about which nearly nothing is known.

This makes the ancient dictum “Know thyself” somewhat harder to satisfy than one might have thought.

What, then, is the body made of? It is a question that conventional thought cannot answer and for the most part cannot contemplate. This leads us to consider views of the body in the world’s esoteric traditions. As in most areas, they don’t agree on all points, but the similarities are more striking than the differences.

The first thing we have to acknowledge is that the body, taken as a purely physical entity, has no structure or coherence whatsoever. This is a strange claim to make, but we can see the truth of it simply by contemplating the difference between a living body and a corpse. The living body has coherence; it is capable of motion and activity, and can sustain itself for several decades. The corpse lacks all such features. It will rot to pieces in a very short time.

There must, then, be an organising structure that holds the physical body together during earthly life. One common name for this, which comes out of early twentieth-century Theosophy, is the etheric body, sometimes known as the etheric double. (I will be mostly using Theosophical terms in this article not because they are necessarily any better, but because they are the most commonly used ones in New Age contexts.)

Thus, for our discussion, we have to redefine the word body. From an esoteric point of view, a body can be described as a vehicle for structuring experience at a particular level of existence.

So what is this etheric body? Here is a firsthand observation. The American writer Rosanne Daryl Thomas describes the death of her cat:

He was leaving us. I held him. He pushed his head under my arm, purring as I stroked him and spoke softly, wanting to fill him with love. And then suddenly his face grew sharper and thinner. His life had gone. I faced his death with grief and unexpected wonder. What I saw was this: that the life force, the spirit, is a thing unto itself, and when it leaves, when it left old Ruffy, his form lost his fullness. Something had clearly gone. What was left once held his old beloved self, but the self which had been present one moment had departed as if on a breeze. I understood what a soul was. It was this self. And I understood that, if energy never dies, that bit of self that was not in him was now elsewhere: where, I could not say, but I had seen it, and seen it go.

This passage suggests that this organising principle, this “bit of self,” inheres not only in humans but in animals as well.

Very likely this etheric body is no more immortal than the physical body. One common tradition holds that the etheric body survives for three days or so after physical death. This seems reasonable: it would explain why most encounters with dead loved ones occur a few days after the loved one’s death. The number drops off greatly after that point.

The etheric body is made up of energy, though of an extremely subtle kind. This energy is known variously as prana, chi or qi, or simply the life force. (Note that Rosanne Thomas uses the phrase life force in the passage above.) The etheric body has its own structure, although this differs radically from the physical object that is studied in anatomy classes. Nevertheless, many traditions describe the patterns of this body, as we see with the meridians of traditional Chinese medicine and the chakras of Hinduism.

The etheric body is not the whole story. There is also what is called the astral body, a term that can be traced back to the Neoplatonic philosopher Proclus, who lived in the fifth century CE. Man, he said, was composed of an okhēma, literally “vehicle,” made of starry or “astral” material. According to esoteric theory, it is affected and shaped by the configurations of the stars and especially the planets. This idea may explain an ancient Orphic verse, which instructs the recently deceased person to say, “I am the child of earthy and starry heaven.” This astral body is thought to be made up of a subtle, starry stuff sometimes called the astral light. Subjectively, the astral body corresponds to the congeries of thoughts, emotions, and images that surround an individual.

Why call this a body? Because it is, as said above, a vehicle for structuring experience – in this case, at what we may call the psychological level. This vehicle does not resemble the physical entity – at least not in any detail – but it possesses its own consistency and organisation. Through their clairvoyant investigations, the Theosophists Annie Besant and C.W. Leadbeater described the astral bodies of various individuals and the colours and shapes associated with certain emotions and desires.

Proclus believed this astral vehicle was immortal, but this is not a universal view. Some say the astral body survives the death of the physical body for around forty days. This would explain why, for example, the Eastern Orthodox tradition says prayers particularly intensely for an individual for the first forty days after his death, and why the period stipulated for reading for the deceased in The Tibetan Book of the Dead is forty-nine days.

Beyond the astral level, there seems to be less agreement among the traditions, no doubt because these are increasingly remote from earthly experience. The Theosophists posit a mental body, as Kurt Leland observes in his interview, which in this case would consist of the structure of ideas and thoughts that surround the individual. But it is also possible to view the astral (emotional) and mental bodies as essentially the same entity.

One curious feature of Theosophy is its concept of permanent atoms. As we’ve seen, all of these subtle bodies disintegrate after death. Given this and given the fact that Theosophy teaches reincarnation, we could ask, what reincarnates? The Theosophical answer is that literally one atom (obviously not an atom of the sort known to science) remains of each of the bodies: etheric, astral, and mental. These atoms are linked to the reincarnating Self and are the vehicles of karma: they are where your karma is stored.

I don’t know of any other traditions that speak of permanent atoms per se, but the idea resembles the concept of the luz in the Kabbalah. Luz, in Hebrew, means “almond.” The French esotericist René Guénon writes that luz is “the name given to a specific, indestructible body, symbolically represented by an extremely hard bone, to which the body, after death, remains attached until its resurrection. As the kernel contains the germ and the bone contains the marrow, so luz contains those elements necessary for a restoration of an individual being.” (Guénon did not believe in reincarnation, so he spoke instead of resurrection.)

Beyond the astral body are levels that are immortal, or relatively so. The Theosophists speak of a causal body that persists between incarnations, as well as progressively higher levels that are extremely different to picture through the lens of earthly experience.

All this said, what knowledge can we have of these subtle bodies? Those who can see them clairvoyantly are rare, and, more often than not, have had this ability since birth.

To experience your own etheric body, the key is proprioception: the subjective, conscious attention to the sensations of the body. This practice is found as a type of meditation both in the Work of G.I. Gurdjieff and Buddhist vipassana meditation. Kum Nye, a Tibetan movement practice taught by the lama Tarthang Tulku, works with it as well. With sufficient practice, you will eventually come to experience sensations as a kind of flow of currents of energy within the body. I would suspect these currents have some relation to the meridians of Chinese medicine and other anatomies of subtle energy.

To have a sense of the astral body, you may find it helpful to sit or lie quietly and imagine yourself surrounded by light. Allow yourself to choose the colour of light that is most satisfying to you. You may have some preconceptions of certain colours as “higher” or “more spiritual” than others, but set these ideas aside as much as possible and focus on exactly which colour or colours feel the most appropriate, and then focus on visualising these. Pay attention to whatever feelings these colours arouse in you. If they produce some discomfort or irritation, it may be best to find another colour.

As for sensing the subtle bodies in others, as I’ve said, clairvoyant vision of auras can and does occur (I have sometimes seen them myself), but the majority of people are more aware of these presences kinaesthetically rather than visually. That is, you go into a room and suddenly feel a chilly dread, or, on the other hand, it gives you a feeling of well-being inside. The same holds true when we encounter certain people.

These kinaesthetic perceptions are, I believe, much more useful avenues of exploration of the subtle realms than attempts at clairvoyance per se. So if you want to cultivate your awareness of these levels, the best way is to focus on what you are feeling rather than on what you might see.

Causal, mental, astral, etheric bodies – how absurdly mystical they sound! At least to some ears. And yet when we look at these new concepts of dark matter and dark energy, we can legitimately ask if these have something to do with the subtle bodies that have been spoken of for so long and so universally. Could it be that our subtle senses – known under such names as telepathy and clairvoyance – are perceiving these unknown substances? And could it be that science has scoffed at such things because its instruments have been too primitive to detect them?


This article was published in New Dawn Special Issue Vol 10 No 3.
If you appreciate this article, please consider a contribution to help maintain this website.