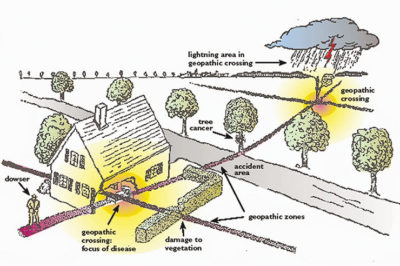 The Earth has a natural background frequency of 7.83Hz, known as the Schumann Resonance, which corresponds to alpha brain waves in humans. When this frequency is thrown out of balance by other energies (either natural or manmade) we can also go out of balance. Our immune systems can weaken, thus inviting any number of illnesses to enter. NASA had to develop Earth Pulse Generators to mimic this natural frequency in spacecraft after finding astronauts lost tone and body mass living without the background 7.83Hz frequency.

I have worked for nearly 20 years in the fields of energy healing and geomancy (Earth energies) and have found that in most cases of illness geopathic stress can be found in the home. When these energies become harmonised again in the environment, the human body has the best chance of healing itself, regardless of the type of illness.

Back in 1929, Gustav Freiherr von Pohl, a German scientist, found that all cases of cancer in the town of Vilsbiburg corresponded with people who slept over areas of high geopathic stress. Many other researchers have found similar results, with Dr. E. Hartman MD theorising that cancer is a disease of location caused by geopathic stress.

In my own experience I have always found where there is high levels of geopathic stress there is illness. Research and personal experience also shows that when geopathic stress is balanced, illness can vanish. The human body is an amazing healer and self-corrector when in harmony with the environment.

Geopathic stress comes in many forms, such as electromagnetic lines of the Earth, bad water lines, fault lines or ley lines. When unbalanced they upset the Schumann Resonance and therefore our own frequencies. When two or more unbalanced natural energies cross, they can cause high levels of geopathic stress.

Fifteen years ago I could always find the geopathic stress in a home related to illness, but nowadays the illnesses seem to be of higher intensity. Once a cancer patient may have been given three years to live, now it’s more like three months. I believe this has to do with the vast amount of electromagnetic pollution we are now exposed to everywhere we go, at home, work, school, shopping centres, hospitals etc. In von Pohl’s day the cancer patients in his experiment slept over areas of high geopathic stress for a number of years, but did not have the added factor of electromagnetic pollution that we are constantly bombarded with today.

In relation to illness, the bed is still the most important area, as it’s where we spend most of our time in one place and where our bodies are supposed to be rejuvenating. Research has found that the part of the body affected by illness is where lines of geopathic stress cross the bed.

About 15 years ago I worked on a house that was in sight of large overhead power lines. The client called me in to look at the energy of the house as their two children were constantly sick and displayed ratty behaviour regularly. I found an unbalanced water line running from the direction of the power lines through the children’s bedroom. Water lines can be deep underground, but their energy vibrates up vertically high above the ground; they have been detected at the top of high-rise buildings. To make matters worse, the children were sleeping in bunks made of tubular metal. The bed frame was attracting and enhancing the negative energy from the water line and power lines. No wonder these kids were ‘ratty’ – they were being zapped constantly and not getting a rejuvenating sleep. Their bodies had no time to heal. I balanced the water line on the property and advised a better suited sleeping space and to get rid of the metal bed frame.

Metal springs in a bed mattress can change the background frequency and enhance negative energy. British geobiologist Roy Riggs found an energy anomaly coming from the metal springs of a mattress belonging to a two year old with brain cancer. After changing to a non-spring mattress the child started to respond positively to treatment.

To get a good night’s sleep, it is advisable to move all electrical equipment as far away from the bed as possible, including clock radios and mobile phones. The electrical wiring running through the wall behind your head can also be a problem. Remember to check behind the wall where your head lies as a computer, fridge or smart meter could be blasting you through the wall. Shielding products are available to lessen electromagnetic pollution if you can’t move away from it.

If you have a serious illness, I suggest you move your bed or sleep in any other room for a while to avoid possible geopathic stress. Or you could learn to dowse to find the negative energies yourself. Do not swap sides with your partner to ‘test’ if they get sick too! You need to spend a lot of time in areas of geopathic stress for your immune system to weaken, such as sleeping or at your desk at work (but as suggested earlier, things seem to be speeding up due to the vast amount of electronics invading our lives).

I believe that many childhood illnesses, allergies, mental focus and emotional issues can be helped by moving the child’s bed. Our kids are being blasted at school with WiFi (which is banned in many European schools), carrying mobile phones and working with computers on their laps. They are continually connected to the electrical grid. Children can also absorb higher levels of electromagnetic radiation as their skulls are thinner and they are still growing.

When working on a house I can usually pick the bed of the child having problems at school or who is more susceptible to illness than their siblings. They are the ones sleeping in areas of geopathic stress. Geopathic stress or electromagnetic pollution on their own can cause problems to the body, however the effect is heightened when the two are combined. So if your child has chronic illness, get the electrics out of the room and move the bed. Being able to sleep and let the body rejuvenate naturally is the best first step to recovery.

Geopathic stress can happen at any time. Natural lines that have been in the land for many years can become unbalanced by pollutants and changes to the area, such as mining and building. Some can extend across continents, while others are localised to a smaller area. About 10 years ago I balanced the energies of a house belonging to a couple in their 50s. There was a long line of geopathic stress running on the property next door, but nothing in the couple’s bedroom. I was surprised to hear two years ago that the woman had died of cancer. I went back to test the area and found that the negative energy line that previously ran through the neighbour’s property now ran through the couple’s bedroom. In the parkland behind the property two large gum trees had been cut down the year before. I believe this is what caused the line of geopathic stress to move.

Animals can often detect geopathic stress. Cats will be attracted to unbalanced energies, while dogs will actively avoid it. So, if your cat has a favourite spot on your bed, try moving the bed and see what happens.

Beds (and any physical item) can store energy. Often this energy, good or bad, has been built up over a number of years through intense emotion, not necessarily from geopathic stress. One client who already had three children was having trouble conceiving a fourth. The couple had had no problems the first three times. When I tested the bed, I found that the old wooden bed head and frame was storing negative energy but the new mattress was not. The couple had recently inherited the bed from an aunt who had been infertile. The aunt’s sadness at not being able to have children had seeped into the bed frame over many years. Once this energy was cleared the couple conceived the following month.

Just a side note on new beds: a friend was having trouble breathing after buying a new mattress. I couldn’t find any geopathic stress or stored energy in the bed, but my dowsing rods detected something wrong with the mattress. Airing out the mattress for a few days, to release the chemicals used in curing the foam, and installing a salt lamp, fixed the breathing problems. So, acute illness isn’t always caused by geopathic stress or electromagnetic pollution, but I’ve found they are usually the culprits in chronic pain and illness.

Ley lines are lines of energy that carry communication of some sort and are usually ‘sent’ by people. There are large ley lines that are intentionally laid out across countries connecting sacred sites or have an altar placed on them to energetically communicate the church’s message to the community. The leys I most frequently encounter are personal leys sent unconsciously from one person to another. These leys can be full of emotion and tend to hit the bed and stove, thus depleting the person of nourishment and rejuvenation. Over time these can have a debilitating effect on the body, depending on the intensity of the emotion attached to it. One client in her 30s developed a severe case of arthritis. After three months of trying different remedies nothing had helped. I found a ley line hitting her bed and stove. It was being unconsciously sent by a lady whose cat had been put down at the vet. My client was the vet nurse who carried the cat away and thus became the focal point of the cat owner’s grief. Together we sent loving energy back down the ley to the cat owner, thus closing the ley. The next morning the arthritis was gone, never to return.

Energy may be unseen but it is definitely felt and absorbed by the body. So, if you suffer from chronic pain, illness or restless sleep, geopathic stress in some form is most likely a contributing factor. Make your bedroom as harmonious as possible to bring the Schumann Resonance back into balance. Use visualisation, nice music, harmonious colours, crystals, loving energy, etc. and if you still feel bad – move the bed.

This article was published in New Dawn 150.
If you appreciate this article, please consider a contribution to help maintain this website.

‘Geopathic Stress: A Definition And Overview’ by Richard Creightmore, www.landandspirit.net/html/geopathic_stress.html