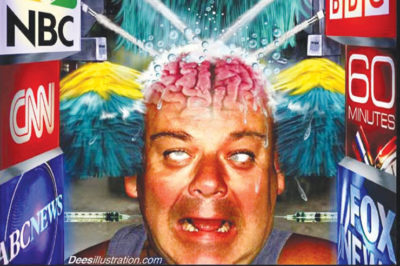 When you flip through your daily newspaper, or watch the nightly news, chances are you have noticed a steady increase in celebrity news, fashion, and gossip filling up the column inches, and crowding out the news.

This has been going on for centuries. In Latin it’s called panem et circenses. Translated, it means ‘bread and circuses’, a phrase made famous by the Roman poet Juvenal circa CE 100. In Roman terms, this phrase refers to the creation of public approval by the ruling class, not by any altruistic or progressive means, but through the use of wonderful distractions and entertainment.

It’s a tried and tested template for keeping the commoners’ point of focus off politics and the economy, and onto the distraction de jour.

Mainstream media has become incredibly adept at reporting the mindless, and the worthless, while completely ignoring the real news.

Celebrity is now a commodity, which means it has some value as a means of exchange. In this case, what is being exchanged is your point of attention. On mass, it’s a fairly cheap commodity.

There are different layers of 21st century celebrity. The new ‘stealth layer’ of celebrity is comprised of Politician, ex-Presidents and Royals, all of whom are permanently plastered on the news because they are unique hybrids – half politician, half celebrity. The Obamas, the Clintons, the Windsors, and the Sarkozys are all hybrids.

Below the top ruling class echelon you find the garden variety celebrity. Pick your poison. Gwenyth Paltrow has broken up with Chris Martin, Kim Kardashian is pregnant with Kanye’s child, Kourtney Kardashian is partying in the Hamptons, Miley Cyrus is doing a striptease at the Grammys, Rihanna spotted wearing Timberland boots, Hunter Parish is baking brownies and David Beckham is getting his legs waxed again. If ‘A-listers’ aren’t your thing, you can spend your time following children of rock stars (rock ‘n roll royalty), children of wealthy people, or go down market and enjoy the steady stream of Reality TV quasi-celebrities, or young women who have slept with a footballer.

What the public fail to realise is these people’s faces do not appear in newspapers, magazines and on news websites because they are unusually talented, or because they have something important to offer society. They appear constantly because their face is actually being used to sell something else, like a film, a new TV show, or a retail product. Their appearances are carefully stage-managed media segments, usually organised (for a fee) by PR companies, entertainment managers and agents.

The saddest part about this PR merry-go-round is that many mainstream media outlets rely on it for a substantial portion of their income – so may feel they have to play the celebrity game simply to survive.

The biggest victims in this game are the public, who, aside from important news being crowded out by celebs and professional athletes, believe they’re getting something authentic, when in fact it’s nothing near.

23 January 2014 was an interesting day in world news – or at least it was supposed to be. Top of all major news outlets worldwide was pop star Justin Bieber, who we were told was arrested on DUI and drag racing charges. In addition to mainstream coverage of Bieber’s big day out, Hollywood’s premier gutter gossip outfit, TMZ, began to tweet intensely the arrest, coupled with the Twitter hashtag #FreeBieber. One can only wonder whether or not the event was completely staged. CNN also joined the party, airing a one hour-long special on the 19 year old, “live at ten.”

The real tragedy of the Bieber PR event was what else happened in the world while Bieber dominated the headlines: Ukrainian protests took a violent turn in Kiev (a prelude to a major geopolitical standoff between the United States and Russia), crucial rounds of Syrian Peace Talks were due to begin in Switzerland, Israeli forces laid siege to Ramallah, and four were killed and 50 were injured as a car bomb ripped through government headquarters in Cairo.

Still, CNN just couldn’t get enough of the Bieber story, coupling it alongside a full-page Toyota advert on CNN.com with a heart-felt message urging parents to “teach teenagers how to drive during their first years on the road.”

In two years time it will be Bieber gets married, in 3 years, Bieber gets divorced, in 4 years, Bieber in rehab, and in 5 years – “Bieber finally comes out.” The publicity machine rolls on, while the public suffer the mushroom treatment.

With celebrities come corporate products. Oscar presenter Ellen DeGeneres dominated global media after the awards ceremony because of her ‘celebrity-selfie’ packed full of Hollywood’s finest. It broke all records on Twitter and stayed on mainstream media heavy rotation for nearly a week. What was sold to the public as an authentic Kodak moment, one where celebrities appeared to be ‘just like us’ – was actually a planned corporate sponsorship stunt. Unknown to a naïve public, DeGeneres just happened to use a Samsung Galaxy Note 3, which she had handed to Bradley Cooper for the group selfie, which was nothing more than an extended commercial for Samsung. Indeed, Samsung has spent millions of dollars to sponsor the Oscars for the last five years.

Back in the old days, less was more. Rare public appearances actually increased a star’s pulling power, and kept their intrinsic media value from suffering ‘over exposure’. The age of the Internet has flipped that equation on its head unfortunately.

If a celeb is not trending on Twitter or Facebook, then their stock is dropping and everyone is losing – the celebrity, their manager, their publicist, and their agent – all losing. So the Internet pump must stay on 365 days per year, chronicling what time they left the gym, walking the dog, what they had for breakfast, who they met for lunch and which night club they stumbled out of at 3am. Going offline is not an option because the signal can never go dark – legions of fans and paid fans reside 24/7 on social networks, blogs, forums, in a crowd-sourced effort to disseminate an endless conveyor belt of vapid gossip, be it boring or salacious.

Social network managers really believe they are offering “a deeper experience” for fans to engage with celebrities. In a 19 February 2012 article published in Forbes, this deeper engagement is explained as follows, “We’re looking for celebrities who will acknowledge their dependence on us and their engagement with us. We want celebrities in fact who will admit that they are like us and… will also show us how they are different, bolder, more outspoken, funnier but not distant.” Really? Like Ellen DeGeneres, her friends and their $1 million “one of us” moment at the Oscars?

It’s no secret that online publications and social networks generate reams of data these days, and celebrity management have already invested vast sums of money in order to both monitor and analyse the number of hits each celebrity article or image gets. Publicity management then takes this data and presents it back to corporate sponsors in order to prove how many unique views, or millions of media impressions, their celebrity clients attract – thus proving their value as a bona fide media commodity.

Navigating the alternative media landscape is itself a full-time job, and as enthusiastic and as driven as you might be in searching out and finding the truth, be cognizant of the fact there are celebrity sycophants out there who are even more determined to find out what brand of sunglasses Beyoncé wears. If you find that thought disturbing on a deep level, then that’s a good sign you care deeply about your neighbour indeed.

Hollywood is the land of illusion, and this faux reality is now amplified through all media channels, not just through TVs and magazines, but in your web browsers and in your palm on your smart phone – all day, every day. Some are completely infatuated with celebrity culture, and sadly for society, some feel that celebrity news is more important than the real news. For these people, show them any real news and their natural self-defensive reaction is to dismiss it, or revert into a form of denial that psychologists commonly refer to as cognitive dissonance.

If you see this condition present in your celebrity obsessed neighbour, it’s incumbent upon you as an enlightened and awakened soldier of the truth to reach out and try to help them engage with the important issues, and explain how these issues affect all of us, and most importantly – that we’re all in this fight together!

This article was published in New Dawn 144.
If you appreciate this article, please consider a contribution to help maintain this website.