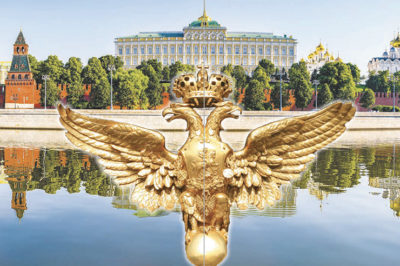 The following is excerpted from the Introduction to my book The Return Of Holy Russia: Apocalyptic History, Mystical Awakening, and the Struggle for the Soul of the World (published in May 2020).

In it I point out one of the reasons for writing the book, specifically the idea that Russian President Vladimir Putin is very keen on revitalising the notion of Russia as the last bastion of the true faith, the bearer of the true Word in an age of unholy godlessness, a mantle it last wore in the nineteenth century.

Why would Putin want to do this? Is his belief and defence of “traditional values” genuine, or merely a means of providing Russia with an identity, something that seems to have slipped away from it through the years of turbulence and chaos following the breakup of the Soviet Union?

Yet it is no secret that except for the brief seventy years of Soviet rule, Russia was the most mystical of Western nations – if indeed it is a “Western” nation at all. As the reader will see here, and as I spell out in greater detail in the book, Russia’s history has always been informed by mystical, spiritual ideas and powerful religious feelings. And it has always been a nation with an ineradicable sense that history was leading somewhere. To where, exactly? Well, that would be telling, but as I say, Russians have not given lip service to the apocalypse. For better or for worse, the Russian soul has never had the end times too far from its thoughts. What might that mean for us today? That is another question I devote more than a few pages to in the book.
– Gary Lachman

Welcome to the Silver Age: A Time of Magic and Mysticism

Another idea that [Russian President Vladimir] Putin is taking seriously is that of Russia as a nation of “traditional values.” It is along these lines that commentators are beginning to speak of a new cold war opening up between Russia and the West. Skirmishes here are not triggered by ideological clashes between capitalism and communism, but by different moral, ethical, and religious worldviews. To think of Russia, home of gangland politics and ostentatious oligarchs, as more morally sensitive than the West may seem counterintuitive. But in Putin’s Russia, the extreme liberalism and permissiveness that characterize Western society – its “anything goes” sensibility – smacks of little more than decadence, and our commercialization of practically everything reeks of selfishness and ego gratification. Nothing seems to resist the spread of the “me” economy, in which everything is yielding and negotiable, even reality. Compared to this, Putin’s Russia upholds more “traditional” standards, and its attitude toward sex, family, and gender roles seems to the “progressive” West highly conservative, if not repressive.

Putin finds his traditional values in his Orthodox belief, and it is in this role of defender of the true faith that, along with Eurasia and the thinkers of the Silver Age, the idea of Holy Russia seems to be making a comeback. This was an identity that Russia and her “God-bearing people” embraced practically from the start, from their earliest adoption of Orthodox Christianity, to the attempt at a theocratic rule during the Muscovite empire of the late Middle Ages, and to the idea of its being a “Third Rome,” after the downfall of the first one and the capture of Constantinople by the Turks in 1453. And it is here, perhaps, that we can find the roots of the notion that Russia has a “mission,” that special destiny that informs the different versions of the “Russian idea.”

Although many fine points of doctrine and dogma separate the Eastern Orthodox Church from Roman Catholicism and Protestantism, one thing that does set Russian Orthodoxy apart from its Western counterparts is its attitude toward the end-time, the Apocalypse, and the Second Coming. While these are indeed part of the Western Church, it has generally damped down any millenarian zeal, and focused more on dealing with the crises and challenges of everyday life. “Repent ye sinner for the end is nigh,” is left to street-corner prophets and Jehovah’s Witnesses. The Western Church has been more this-worldly, and its interest in worldly power is one of the criticisms that its eastern counterpart has made against it.

The end days, however, have always been of great importance to the Eastern Church, which has always been more open to mysticism and esoteric knowledge. Its focus has been more eschatological than the West, and this anticipation of the Second Coming and the establishment of the Kingdom of Heaven on Earth was something that the Russian people embraced wholeheartedly when they accepted Eastern Orthodoxy as their religion. They took the idea of rebirth very seriously; this is why Easter is a much more important holy day in the Orthodox calendar than Christmas. Resurrection was of the essence. They did not give lip service to the Apocalypse.

This belief that the world was moving toward some event after which everything would be different became a part of the Russian soul. As [the Russian religious philosopher Nikolai] Berdyaev said, Russians are either “apocalyptists” or “nihilists,” that is, for them it is a case of everything or nothing, either the millennium and Heaven on Earth or the void.

But the mystical, spiritual character of the Russian soul seemed to be in place even before its contact with Orthodoxy and its embrace of the true faith. The Russian people had a rich pagan tradition full of gods and goddesses, elemental forces, and nature spirits. As with other pagan people converted to Christianity – of whom the Russians were one of the last – this tradition did not die out but was maintained alongside the new Christian belief, an arrangement known as dvoeverie, “double faith,” an example, perhaps, of the ability of the Russian soul to hold contradictory ideas simultaneously, and of the tensions at work in doing so.

With the aid of mystically potent icons – “windows on another world” as they were called by Father Pavel Florensky, an important figure of the Silver Age – this native paganism helped the spread of Orthodoxy within Russia. During the centuries of the “Mongol yoke,” the influence of shamanism and other magical practices reached the courts of the vassal Russian princes, and when that yoke had been broken, in the days of the Muscovite empire, alchemists, Hermeticists, Kabbalists, and other savants of the occult sciences were welcomed and their counsel sought.

Esoteric ideas even made their way to Tsar Alexander I, the savior of Europe in the Napoleonic wars and leader of the Holy Alliance, who was believed to have faked his own death in order to retire from power to spend his last days in spiritual contemplation. That the last days of the Romanovs were filled with mystical and apocalyptic expectation is well known. Rasputin is the most notorious figure here, but he was not the only mystical character giving advice to the doomed dynasty. And in the years of Soviet rule, ideas of an occult, mystical, and magical character continued to influence the commissars and comrades of the great Bolshevik experiment, with God-seekers becoming God-builders. More than one historian has noted that the millenarian trend in Russia thought made it more receptive to the Marxist vision of a coming classless utopia.

With Putin’s interest in notions such as Eurasia, in the philosophers of the Silver Age, and his gestures toward Holy Russia, this Russian interest in things mystical and apocalyptic seems to be continuing.

This article was published in New Dawn 178.
If you appreciate this article, please consider a contribution to help maintain this website.