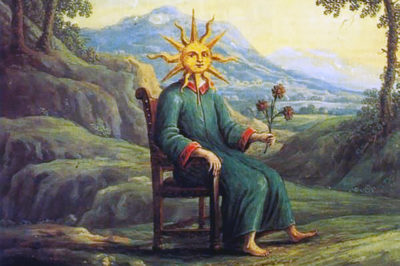 It is a remote location in China in the early 1960s. A young man, Wang Liping, is studying with three Taoist masters. After preliminary training, they give him a grain of “gold elixir.”

Wang sits in a cross-legged position. The masters tie up his legs so that he will stay seated. He then goes into a deep state of trance. On the first day, he feels as if his insides are burning, and he passes out. But thanks to the ropes, he remains immovable in the cross-legged position.

On the second day, Wang’s skin changes colour from sallow to ruddy to dark. The masters judge that the toxins in his body have been pushed to the surface.

At this point he has been pushed to the limits of his endurance, but he keeps on meditating. His skin experiences all kinds of sensations from burning to itching and aching.

Finally on the third day, Wang’s body becomes comfortable again. His skin colour has changed to a healthy rosy white and glistens. The gold elixir has been completely expelled from his body. The operation is a success.

This account, taken from a book called Opening the Dragon Gate, describes Wang Liping’s training as a Taoist master. Its mention of a gold elixir – which the text does not otherwise describe – evokes images of alchemy. It leads one to wonder exactly what alchemy is.

Superficially, everyone knows what alchemy is. It is an outmoded practice for changing base metal to gold. Although it was in its way an important precursor to present-day chemistry, today it is little more than a discarded superstition.

Accounts like Wang’s tell another story. They suggest there are other dimensions to alchemy than simply heating and cooling metals in the hope they turn into gold. And of course the old alchemists themselves said, “Our gold is not the gold of the vulgar.”

Moreover, to say alchemy is outmoded may be jumping to conclusions. One of the few practicing alchemists I know in the US is a former chemistry professor. At one point he found conventional chemistry too boring, gave it up, and turned to alchemy. Even so, I see from his website that he does metallurgic consulting for the Smithsonian Institution in Washington.

To understand alchemy in more than a simplistic way, one needs to take into account several strands of the alchemical tradition. They interconnect and interpenetrate, and to the outsider, the noninitiate (such as me), their relations are impossible to sort out in any kind of complete way.

The first is the best-known kind: practical transformation of natural substances. Metals are not necessarily the best place to start. One of the best-known alchemical schools of the twentieth century, the Paracelsus Research Society, was operated by the German magus Albert Riedel, known as Frater Albertus, in Salt Lake City, Utah, in the US, until his death in 1984. (Some of his students continued his work in Australia as Paracelsus College: homepages.ihug.com.au/%7Epanopus/).

Frater Albertus’s students started out by making a “plant stone” – taking a plant and subjecting it to certain operations to crystallise its essential nature. Plant stones apparently have any number of uses, including healing. Hans Nintzel, a pupil of Frater Albertus, writes:

So, we have killed the plant to enable it to give up its soul and spirit. Then we have reunited them and thus resurrected them in a new and glorified body. This product is the highest form of the plant attainable. Philosophically speaking, note that the plant could not do it for itself. It needed a “higher power” (in this case, man) to accomplish this highest transmutation. The plant stone can not only perform interesting physical phenomena, but is an extremely powerful medicine. Depending on what plant or herb it was made from, it can provide a variety of cures.

Working with metals is a later, more advanced process. But Nintzel adds, “metals, having long absorbed planetary influences, are far more powerful than herbs in healing.”

Nintzel also says that according to alchemy, all things are composed of three essential substances: sulphur, mercury, and salt. “These are consciousness (sulphur), a vivifying life force (mercury), and the vehicle in which the latter two are housed (salt).” Clearly these substances are defined differently than they are in ordinary language.

Unlike conventional chemistry, this is not a practice that takes place entirely outside the operator. The French alchemist François Trojani says:

The physical world is shown to be far more malleable than science imagines. But this malleability is not some power attained by the alchemist as a separate being, a human subject, to be then replicated on equivalent material objects by other human subjects. The separation of subject and object is revealed as illusion. The Work accomplishes the worker: experiment and experimenter are an inseparable whole.

Here we can see how this first type of alchemy may intersect with the second kind. This is the kind we glimpsed in the story of Wang Liping. It is not a matter of transforming metals, but of transforming certain substances and energies in the human body. One occasionally hears mention of “Taoist inner alchemy,” which often involves certain visualisation practices as well as the circulation of chi energy within the body (something that can be done with a small amount of training and practice).

Curiously, sometimes this process seems to involve ingesting certain types of metal preparations. It’s hard to say what the Chinese gold elixir was made of, but very likely it did include gold. Cinnabar (mercury sulfide) is also sometimes ingested, and supposedly has therapeutic properties – when taken the right way. Mercury itself, as is well known, is poisonous.

The third type of alchemy is a twentieth-century innovation, created by the Swiss psychologist Carl Jung. It involves an engagement with certain energies called archetypes as manifested in symbols. Jung himself called it active imagination. It is a type of visualisation in which the practitioner engages with images and characters taken from dreams. Because these can resemble the bizarre and mysterious figures in alchemical art, Jung saw this as a form of inner alchemy. He himself collected alchemical books, and much of his impenetrable late work Mysterium Conjunctionis deals with alchemical symbols.

But Jung’s alchemy is not held in the highest regard by at least some practicing alchemists. François Trojani says:

Jung was not a real alchemist because he attempted to reduce alchemy to its psychological aspect. His understanding of that aspect was excellent as far as it went, but there is much more to alchemy than psychology. It was reductionistic of him to treat laboratory work as a collection of symbols of psychological work. Of course it is rich in symbols, but true symbols are much more powerful and alive than they are considered to be in modern thought, even Jung’s.

In any case, there are these three versions of alchemy – one involving materials such as minerals, the second having to do with the subtle energies of the body, the third having to do with energies and symbols in the psyche. And although these practices overlap to a certain degree – after all, you would need to do alchemy with metals to make a gold elixir for the body – it would seem to be a mistake to confuse one with another. Or to assume that an alchemical practitioner of one kind necessarily has knowledge of the others.

If there is any single thread connecting all of these practices, it has to do with consciousness. Alchemy is an attempt to make practical use of the fact that consciousness, in some form and to some degree, is present in all things. One form seeks to refine the consciousness of plants and minerals to the highest degree possible. Another seeks to do the same with the processes of the human body. The third, Jung’s, tries to bring unconscious parts of the mind to awareness, where they can be integrated.

Maybe we could go still further and say that consciousness is the true gold of the alchemists. As they said, it is not the gold of the vulgar.

This article was published in New Dawn Special Issue Vol 9 No 2.
If you appreciate this article, please consider a contribution to help maintain this website.

Opening the Dragon Gate: The Making of a Modern Taoist Master by Chen Kaiguo and Zheng Shunchao, Translated by Thomas Cleary, Tuttle, 1996

The Hermetic Tradition: Symbols and Teachings of the Royal Art by Julius Evola, Translated by E.E. Rehmus, Inner Traditions, 1995

“The Quintessence of Alchemy: The Gnosis Interview with François Trojani” by Joseph Rowe, Gnosis 40 (summer 1996), 34–40